One afternoon in 1980, a gadfly candidate named Bernie Sanders and his roommate Richard Sugarman, an adjunct professor of religion at the University of Vermont, went to the Burlington city hall to look over the results from Mr. Sanders’ most recent election: his 1976 run for governor.

It was a position he had sought before in 1972, in between two successive unsuccessful attempts at the U.S. Senate, each time running on the Liberty Union Party line and its broad socialist-pacifist platform. (“He said we needed fundamental change,” recalled perennial New York Green Party candidate Howie Hawkins, who would often cross the Connecticut River from where he attended college at Dartmouth to hand out Sanders flyers). The 1976 campaign had yielded the most impressive return of Mr. Sanders’ career: six percent.

But Mr. Sugarman noticed that in Burlington’s poorest wards his friend had received as much as 16 percent of the vote. And it occurred to him that Mr. Sanders—a man enamored of the works of Sigmund Freud and of turn-of-the-century Socialist Party leader Eugene V. Debs—should turn his energies toward a less ambitious, though still daunting task: unseating six-term Mayor Gordon Paquette.

“I told him he needed an office, that was an old joke between him and me,” Mr. Sugarman told the Observer in a phone interview. “I felt if he really made a concentrated effort at running for mayor, he’d have a shot.”

Then, as now, Mr. Sanders seemed like the archetype of a fringe candidate: a bespectacled Brooklyn-accented eccentric with unruly receding hair and clothes in a state of seemingly perpetual dishevelment—not to mention a “flatlander” to those born and reared in the green mountains of Vermont.

The difference between the Bernie Sanders who pulled two percent of the vote in a special election for the Senate in 1972 and the Bernie Sanders who won re-election to that same body 40 years later with nearly three-quarters of the Vermont electorate behind him, and who now seeks the Democratic nomination for the White House, is a record of winning smaller offices and paying attention to constituents’ most basic concerns. The chart of his success could be read as a blueprint for the dark horses who every election cycle aim at offices—governor, Senate, Congress, president—far beyond their reach, and whose sweeping promises generate a cult-like excitement among a handful of supporters but never achieve a wider appeal by Election Day.

Mr. Sanders is a long shot to win the Democratic nomination, much less the presidency, but he is not a laughable long shot. Having served eight terms in Congress and one and a half in the Senate, he has the resume of a credible candidate. Compare him to the most prominent outsider presidential contender in recent memory: Ralph Nader, who when pressed by Chris Matthews on his qualifications in 2004, could only point to his experience working in the Department of Labor under Daniel Patrick Moynihan in the 1960s.

What got Mr. Sanders where he is now is what got him elected mayor in 1981: building a base from the bottom up, and shifting his focus from the grandiose to the granular. The low-income areas of Burlington always took the longest to get their streets cleaned after a smothering New England snowstorm, Mr. Sugarman recalled, with often just one sanitation worker on a single shift charged with shoveling out an entire neighborhood.

“I told him people aren’t going to care so much about the ideology, they care if the snow was going to be removed,” the professor said. “I think my role in this was to point him in a more concrete direction rather than an abstract direction. I thought if he focused on something that was in reach and that he was knowledgeable in, he would do well.”

Mr. Sanders, though still openly identifying as a socialist, ran as an independent on a platform of better blizzard clean-up and of a smaller property tax increase than the one the incumbent backed. After an aggressive campaign of door-knocking and riding around with snow crews, he won by 10 votes.

In office, Mr. Sanders’ major initiatives involved refurbishing public parks, planting street trees, improving the municipal waste and systems, revitalizing the city’s waterfront and attracting a minor league baseball team to the town. His governance recalled that of the so-called “sewer socialists” that controlled small cities from Milwaukee to Schenectady three generations earlier, who hard leftists sneered at for being more preoccupied with public goods than proletarian upheaval.

Mr. Sanders’ independent socialist allies gained control of the local board of aldermen, and he won four two-year terms as the city’s leader. It gave him a portfolio of accomplishments he could point to when, in 1988, he took his first shot at the open congressional seat covering all of Vermont.

“He established a good record, and then people took him seriously. And he had standing when he wanted to move up,” Mr. Hawkins remembered.

He lost by four points in a three-way race to the Republican, in a year when George H.W. Bush won the state. Mr. Sanders tried again in 1990 and succeeded—and held the seat for 16 years, before finally graduating to the Senate.

According to Fordham University Professor Zephyr Teachout—whose journey from Vermont to Brooklyn, and primary challenge of Gov. Andrew Cuomo, seems like a mirror-image of Mr. Sanders’ early career—Mr. Sanders succeeded by leveling his attention on bread-and-butter issues: expanding access to dental care in the countryside, helping people cope with credit card debt, increasing benefits for military veterans. Burlington was regarded as a cosmopolitan enclave in a largely rural and conservative-tilting state, but Ms. Teachout recalled that even her registered Republican relatives voiced support and admiration for Congress’ only self-identified socialist lawmaker.

“You’ll hear him talk about credit cards and teeth, and really connect with people in a very grounded way,” Ms. Teachout, who briefly worked as a consultant to Mr. Sanders’ campaign in the mid-2000s, told the Observer. “By talking about very specific things, I think has allowed him to cross party lines.”

Vermont, being the 49th most populous state, provided Mr. Sanders with a short ladder into national office. Burlington, the largest municipality, has fewer than 43,000 residents, making it a fraction the size of Buffalo or Syracuse, let along New York City. So outsider candidates here might expect to start several rungs lower.

Ms. Teachout, running on a broad opposition to corruption and a general liberal fatigue with Mr. Cuomo, garnered 34 percent of the vote in her primary challenge of the governor—34 times what Mr. Sanders received in his first gubernatorial run. But, in Ms. Teachout’s words, she “got lucky” because of the cloud of federal investigations hovering over all Albany and because of Mr. Cuomo’s blundering efforts to remove her from the ballot.

Veteran consultant and electoral analyst Jerry Skurnik, co-founder of the firm Prime New York, pointed out that she received just 84,000 votes in New York City. But if—like Mr. Sanders and Mr. Sugarman 30 years ago—she pored over her results to see where she performed best, she would see she outpolled Mr. Cuomo in six Assembly districts in the five boroughs.

“It’s the six you would expect,” Mr. Skurnik laughed—that is, those covering Park Slope, Brooklyn Heights, and from the West Village to the Upper West Side.

Mr. Skurnik pointed out that those six Assembly districts largely correspond with four City Council seats and one congressional district. But he pointed out all of them are currently in hands of a Democrat eligible for re-election.

“She would have to run against an incumbent. But she ran against Andrew Cuomo, he’s an incumbent, so that doesn’t have to stop her,” he told the Observer, noting that her gubernatorial bid gave her some amount of celebrity. “She’s better known now. You build on the strength that you showed.”

Ms. Teachout told the Observer she was interested in seeking elected office again but, unlike Mr. Sanders, said she was more likely to wait for a seat to open up than take on another entrenched politician. She was also not committed to keeping her ambitions to a smaller scale.

“I think I will have a look to where there are open races,” she said. “I’m certainly looking at different offices, but I’m not going to shut down the possibility of running again for statewide office.”

Mr. Hawkins’ electoral history also demonstrates the comparative strength outsider candidates show when they seek smaller offices. He has run twice for governor, once for state comptroller, once for the U.S Senate and once for Congress under the banner of a “Green New Deal,” and pulled between one and five percent of the vote.

But in 2009—a year when the Green Party did not even have a line on the ballot in New York—Mr. Hawkins challenged an incumbent city councilman in his hometown of Syracuse on a platform of improving constituent services and opening city contracts up to more women and minority-owned businesses, as well as bigger ideas like socialized electricity and creating municipal banks. He received 41 percent of the vote.

When the seat opened up in 2011, he ran again and came within 96 votes of victory. He fared less well running against the new incumbent in 2013, but still got 40 percent—far better than any of his runs for state or federal office, or even his campaigns for citywide seats in the 1990s and 2000s.

Mr. Hawkins, who is now running to oust Syracuse’s city auditor, agreed that the Green Party needs to focus on picking up local offices in order to ever have a shot at holding a state or federal position.

“If you can win a City Council seat, why not an Assembly seat, or even a congressional seat, or a local city seat like mayor?” he said. “We’ve got to replicate that several times in order to be credible or competitive when we run for statewide office.”

“The next breakthrough for us is to elect a council member in a city like Syracuse or Rochester or Albany. Or New York City,” he continued.

As for Mr. Sanders, does his quixotic campaign for the presidency mean he has reverted to what Mr. Sugarman termed “the politics of symbolism?”

“He always takes everything with great seriousness. When he says ‘I’m running to win,’ he means it,” the professor told the Observer. 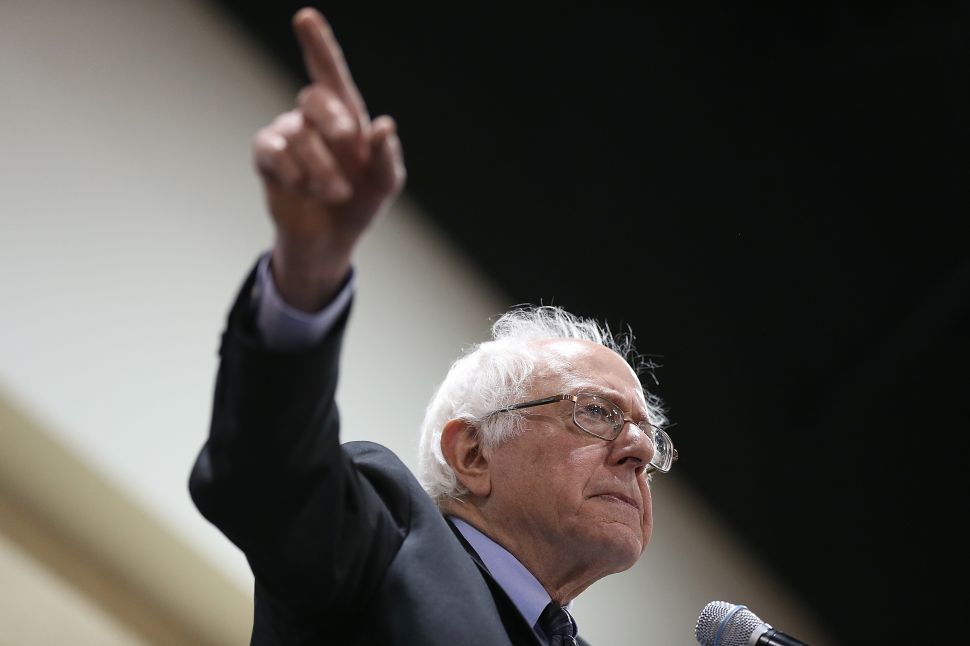