They say that the dead don’t talk.

We could add that neither do they marry.

And in this simple calculation is the answer to how the brutal government of Iran has solved its own gay marriage debate.

If you kill gay men and women for simply coming out of the closet, there is little chance they will agitate for the right to marry.

The fight for the rights of gays to marry here in the United States has once again made its way to the Supreme Court. The question this time is if all states should be legally required to recognize and allow gay marriages, even those fourteen states whose voters are against doing so. The momentum behind the fight for gay rights has been slowly increasing for over a decade, ever since Massachusetts became the first state to recognize gay marriage in 2003. And this debate has been front and center in the media, in political discourse, and in everyday conversation and debate throughout our nation.

The United States has a few dozen gay lobby groups that are devoted to the issue of gay rights and recognition under the law. And whatever your opinion is on gay marriage, polls show that the overwhelming majority of Americas want gay men and women to be able to live their lives enjoying full civil rights and freedom from discrimination. Even people with religious objections to homosexuality will insist that they love their fellow gay brothers and sisters and will do everything they can to ensure they feel safe and free in this great country, even if they oppose redefining marriage.

Which brings us to the strange contradiction in our country’s attitudes toward the freedoms of gays who live in the rest of the world.

It seems that while gay lobby groups, the media, politicians, and everyday citizens will speak out and protest with outrage at the slightest sign of discrimination against someone who is gay, there is hardly a peep when gays are arrested, tortured, and executed in Iran and elsewhere in the world. And while average citizens may claim ignorance as to the atrocities being perpetrated against gays in Iran, the lobbyist groups, the politicians, and the media have no such alibi.

These various groups are very aware that Iranian homosexuals live in constant fear at being discovered and outed, thereby facing extreme persecution and harassment. If caught in a homosexual act, the usual punishment is 99 lashes and a year in jail assuming that they show the judge they are repentant. And that’s when the judge is lenient. A death sentence is common.

Lobbyists and politicians are well aware that the number of Iranian homosexuals who have been executed under Iranian law since 1979 is estimated by human rights activists and opponents of the current Iranian regime to be in the range of 4000-6000 gays and lesbians killed for having sexual relations with someone of the same gender. These are staggering numbers that should shake the conscience of every decent person.

Furthermore, while Iran has very liberal laws with regards to transgender individuals, and in fact the government will help pay for such surgeries, these policies are actually used as another tool to destroy and persecute gays and lesbians in Iran.  That’s because Iranian homosexuals are actually told and encouraged by religious clerics, and even their own families, that they must undergo sexual reassignment surgery for their own benefit because the reason they are attracted to members of the same sex is that the true gender of their soul is trapped in the wrong body. Many of these innocent gay men and women are forced to make these life changing decisions at relatively young ages. They then must live with the pain and emotional scars and confusion of life-altering surgery that had been brutally forced upon them.

If this is shocking and disconcerting, it should be. Yet do we ever hear about these human rights violations in the news or from our politicians or even President Obama?  Do any of the gay lobby groups, or any other groups who claim to be so focused on human rights violations, bring up these injustices in a significant way that the average citizen of the United States could at least be aware that this is happening and voice their outrage as such stone-age barbarism?

Maybe it’s the fear that publicly speaking out about this topic could be construed as Islamophobic and is thus best swept under the rug. Or maybe it is the soft bigotry of low expectations that subconsciously accepts the idea that individual rights, freedoms, and the need for total equality is important for Americans but it really is not as important for Iranians.

There is actually a very good way of testing the true feelings and intentions of anyone who claims to care deeply about defending the rights and freedoms of a particular group or demographic. That test involves their attitude towards that group not just in the US but in the rest of the world.

A perfect example are the various Jewish groups whose mission is to protect Jews from discrimination and anti-Semitism in all its forms. To these groups, it is not just the rights and safety of the Jews in the United States that matters but the rights of every single Jew wherever they may be found. This stands in contrast to groups who profess a respect for gay rights in the US but who are silent about the indiscriminate murder of gays and lesbians in other parts of the world.

That Iran especially is given a pass as they slaughter gay men and women is a stain on the conscience of America. Here we are, the world’s most powerful nation, negotiating a nuclear deal with Iran that will lift international sanctions against the brutal regime. Yet, neither President Obama nor John Kerry has uttered a peep about Iran ceasing the slaughter of gay men and women as a precondition to a deal. Nor has there been any visible pressure exerted by gay rights groups that this be a central staple of the negotiations.

If you care about gays in Alabama but could not give a damn about gays in Iran, it turns out you are more concerned with the legal framework of the United States than you are concerned about the actual suffering of human beings.

While we debate whether gay men and women have a right to marry here in the United States, gays in Iran fight simply to be allowed to breath and survive.

Will we help them? 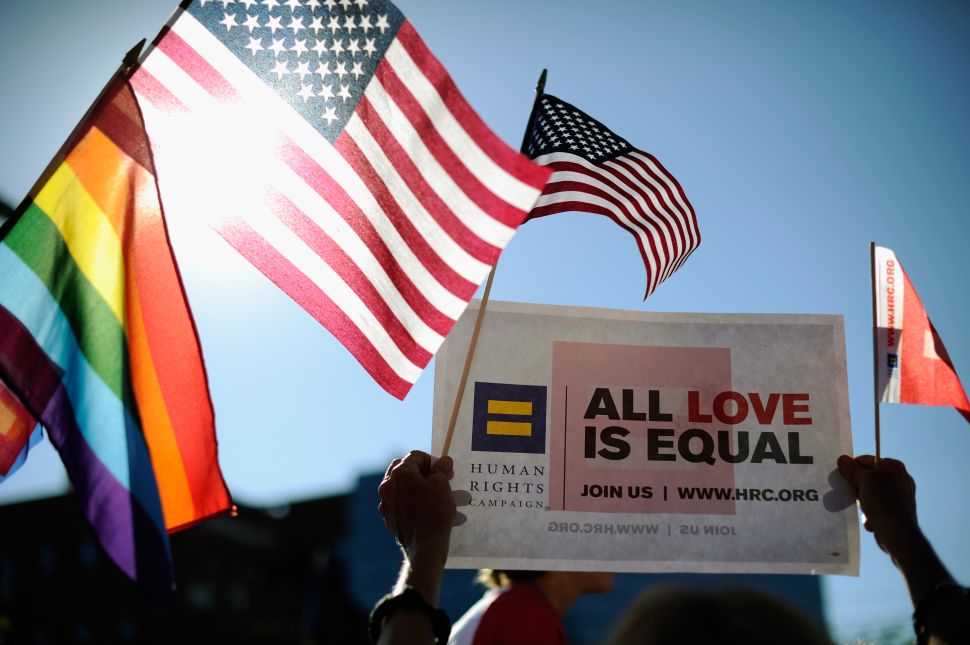