Here’s what to expect: Your phone will vibrate incessantly with Twitter mentions. You’ll receive angry, obscenity filled emails and anonymous comments on your blog. Bloggers will take you out of context (a columnist at The Guardian compared me to a mass murderer — seriously). And maybe, you’ll receive an inappropriate package at your home, as I did.

It’s easy to attack people on the Internet. Critics can act out against you at a distance “safe” for them without having to see how it makes you feel. They can say things in an instant that they would never say to you in person or in public. Twitter, especially, is a particularly easy venue for reactive people to react angrily. It’s simple to retweet or favorite a harassing tweet without reflecting on how this triggers notifications that impact an actual person.

Don’t be surprised if you feel anxiety symptoms similar to what you’d feel if accosted in the real world. When someone tweeted that I was an “abusive shitbag” to their ten thousand followers, my heart raced, I felt a sense of fear and I slept restlessly. I’ve even noticed small physiological responses when notifications alert me to someone favoriting a harassing tweet.

What Can You Do?

First, turn off your phone’s Twitter notifications. Take a mental health break. Practice self-care. Go for a walk, a run or take a yoga class. Talk it over with friends. It’s important to express your feelings offline to people who care about you. Take in the positive feedback.

Wait until you’re feeling on solid ground to read the criticisms. I recommend waiting at least a few days. In the meantime, ask a friend to monitor your Twitter account and to alert you if there’s anything important you need to respond to. If you must read the comments, skim them.

While you can block people, I prefer not to. I want to know what critics are saying so I can make sense of it. I’m also trying to encourage positive conversations online and it’s important to acknowledge people’s anger if you intend to respond in the future. In some situations, it may be powerful to share the responses publicly.

It’s instinctive to react defensively to hostility, but the sooner you depersonalize the criticism, the easier it will be to make sense of the response. People’s anger probably has much more to do with their stories than yours.

Most of all take heart: The rage may mean that you’re writing about difficult topics in a way that challenges culture. A friend said, “[your] pieces evoke emotion because they are thoughtful and question what we think we know.” Another told me performance artists always know their work is powerful when it stirs a strong emotional response.

Probably you should, but not right away and only if you have good intentions.

You should respond if you wish to correct key facts or can elevate the conversation to a higher level.

You shouldn’t respond to defend yourself or convince critics that they’re wrong; you will fail. (Read Shining Light on Internet Rage for a deeper analysis of why people react so angrily online).

Don’t recruit friends online to defend you; it’s understandable that they will want to avoid the fray and protect their online “brand” from a hostile fight — just like in the real world.

Let people support you organically. I was very touched by Alicia Ostarello’s Opening Up Your Ribcage for Public Criticism:

“Basically, my worst writing fears came true: [Jeff] was misinterpreted, misrepresented, and attacked. Instead of coiling beneath his quilt, [he] did basically the exact opposite: He wrote a follow up piece in which he sat down, deeply researched exactly what was said about him and began piecing together why he’d hit a nerve – and offered a response.”

If you do wish to respond, take your time with it. Seek feedback and advice from experts outside of your regular friends; they might be more comfortable understanding the points of view of your critics and offering direct feedback. Ask them not to pull punches. In my case, I reached out to female activists and accomplished writers.

Stay positive and don’t engage in personal attacks. Don’t try to rehabilitate your character; show people who you are through your reflection and honesty and the tone of your response. Hire an editor with sensitivity to the criticisms you’ve received.

If you’ve made mistakes, acknowledge them. I recommend not identifying people by name, except under certain circumstances; for example, in my editorial response to The Guardian, I’ve named the journalist (he’s a professional). Calling out our critics by name only further inflames the situation and invokes the specter of public shaming, which researcher Brene Brown calls counterproductive.

If you can, be funny and self-deprecating, as Tricia Romano did phenomenally in What I Learned About “Myself” from Internet Trolls; but, if the criticism of you deals with a serious topic, humor probably isn’t appropriate.

Sometimes I’ve found it helpful to create fact sheets or responses to common criticisms, as I did to educate people about Microsoft’s Nevada tax dodge and address the typical responses I’d hear from trolls.

Experts who journalist Nick Bilton consulted suggest taking your time with a response and doing so in a different venue than the criticisms.

During the attacks on me, I didn’t engage at all until the end of the week. I wrote a short placeholder acknowledging people’s anger until I could take the time required to adequately respond with a more reasoned response.

Once you’ve posted your response, you may feel more confident engaging in discussions. If you’ve been successful, the conversation may have shifted; but this won’t always be the case.

Ms. Jusino wrote, “it’s not about you or what really happened in your relationship or your article. It’s about needing something new today to be angry about. You will never, ever win over this crowd, because they’ve got too much vested in making you the villain of their story.”

Do let your critics know that you’ve responded. I’ve sent polite emails to most of the bloggers who critiqued me and some folks on Twitter, especially those with thousands of followers. But, here’s a good reminder why you shouldn’t feed the trolls:

Expect that critics will post your emails to them; two of mine did.

Say Your Piece, Let Go of the Reaction

Yoga philosophy teaches that while we have the right to take action, we’re not entitled to the results. Put your heart into responding but detach from how people receive it. You’re not what others think of you; especially Internet trolls.

There are many people who prefer to stay angry, hostile and toxic regardless of what we say. Just as we choose our friends and community carefully in the real world, don’t engage with these kinds of people online and don’t be fooled by how effortlessly Twitter connects them to you.

I appreciated this tweet which I discovered (ironically) when the above critic shared it:

Ultimately, haters gonna hate. It’s pretty unlikely you’ll be able to get angry, emotionally triggered people to be open to your ideas; and that’s what we’re talking about here. Who goes out in public and says the stuff trolls say online? Hurt, angry people.

A yoga teacher of mine, Sarahjoy Marsh, wrote, “[how people respond] will greatly depend on their own maturity, their comfort level with their personal vulnerability, and their willingness to be responsible in their interpersonal dynamics.”

When people are name calling, they’re triggered emotionally. So, have empathy for their experience and their wounds.

You can make the effort to respond in a positive way — but it’s ultimately up to them to find their way.

In my case, my most outspoken critics were defensive and doubled down their efforts at public shaming. However, over time, responding well can make a difference. After years of reporting on Microsoft’s tax dodging, my most recent article wasn’t attacked by a single troll.

Also, take comfort that the Internet and the real world rarely collide, despite all the attention the anger at me had — and the article in The Guardian, only one person in my life actually came across it on their own and emailed me. For the rest, it was news to them when I brought it up.

Don’t allow Internet harassment to intimidate you from leading the challenging conversations that are going to change the world. 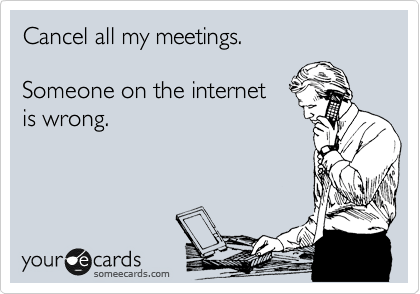