I love Ramsay Bolton, and I only slightly care who knows it. Sure, he’s responsible for the second most offensive* rape scene on Game of Thrones. Sure, he’s an insane bastard (sorry, former bastard) whose house sigil is a man being flayed alive. Sure, he turned Theon from a lovable rapscallion into a twitchy eunuch and probably plans on murdering his future half-brother in the womb. But what can I say? This guy just does it for me. Ramsay Bolton (née Snow), as portrayed by the moon-faced, fever-eyed Welsh actor Iwan Rheon, just. does. it. for. me.

To be a great villain, you have to possess a certain kind of charm or flair. Think Heath Ledger and Tom Hardy** in the Dark Knight films. Think Robin Lord Taylor as Cobblepot in Gotham. Think Loki in The Avengers/Thor or Lord Humungus in the only good Mad Max. (Boy, I’m really full of TERRIBLE OPINIONS today. Sorry!)  Comic book villains are memorable because they have fun. Unlike brooding protagonists (Bruce Wayne; all the Starks) and their equally earnest love interests, the truly iconic psychopaths in pop culture…well, they POP. They also tend to giggle and beam and have awesome accents. They just have fun with it.

So look: I’m not defending/denying the sexual assault of the wedding episode, nor claiming that Ramsay is a good character. But even in the relative terms of Sansa Stark’s four engagements, Ramsay is only the second biggest sadist. He still comes in behind Joffrey, who actually loathed his betrothed–showing her her father’s head on a pike, just for fun–instead of just placidly indifferent, the way Ramsay seems to be. (He certainly spent a lot more time torturing Theon than Sansa, and in a very sexually explicit manner that absolutely no one complained about at the time.)

But trying to debate Ramsay’s finer points defeats my argument here, which is that his very badness is what makes him GREAT. In a world where every other character’s motivation is known–sit on Iron Throne, rule Westeros, kill ice zombies, get yelled at by Gilly–Ramsay is an opaque wild card. We know it meant a lot to him when his father de-bastardized him, and we know that he’s worried about losing his title and inheritance as Warden of the North to his unborn half-sibling. But do we actually think Ramsay wants to be Warden of the North? I doubt it’s as important to him as like, flaying people alive and hunting them down with his Anastasia Steele of the kennels, Myranda.

Ramsay’s interest in the claim is more about being recognized, in the literal sense, by his father. In a way, he’s like Jon Snow’s evil doppleganger: they’re both dedicated to a cause the requires sacrifice (“What I want isn’t important now,” he tells Myranda), they’re both born a Snow bastard, and they both like the color black. A lot. But where Jon is earnest and noble and annoying to the point where you start sympathizing with Alliser Thorne, Ramsay never takes life too seriously. He takes his JOB seriously, and he’s PASSIONATE, but you know what they say: if you do what you love–hunting women as sport and filleting people like human fish–you will never work a day in your life, as long as you live in a brutal war zone where that kind of thing gets a pass.

Plus, I mean, did you HEAR how he was conceived? That was some Amanda Krueger-level shit. No wonder he’s got some issues he needs to work through with the help of his hounds. 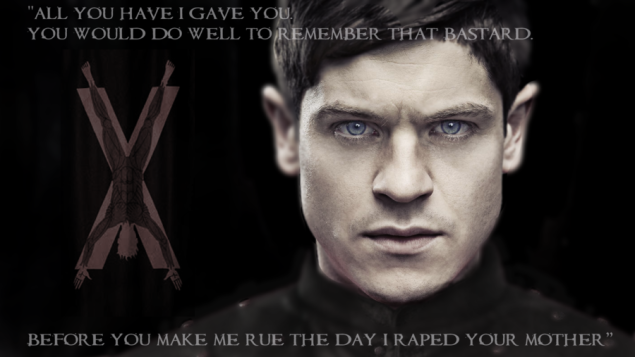 Hannibal Lecter gets his own TV show and he eats people. Ramsay doesn’t eat people! He just pretends to!

Also, that actor. Iwan Rheon. God, that man has the best face since Cillian Murphy (who was also a great villain in Batman Begins! I’m noticing a disturbing trend in my attractions!) You might remember him as the creepy-but-heroic Simon on the British super hero show, Misfits, where his skulking game was A++.

You know what? No. I refuse to even continue this article until you go over to Hulu and watch at LEAST the first episode of Misfits. Then come back to me and we’ll talk. Here, I’ll even embed it for you.
[hulu id=ntsmqujzfh_s7j2ebvmwtg width=512]

So yes, I am utterly, thoroughly compelled by Ramsay Bolton. He’s a rapist, a murderer, a sadist and a little emo, but he’s ALSO a welcome respite of whimsical madness in a show that has a tendency to take its quest/revenge plots way too seriously.***

*According to the Internet.

**Bonus points if you recognize the Game of Thrones actor in the opening of The Dark Knight Rises! Hint: he plays “CIA” (just “CIA,”) and loves chaos ladders and Baltimore!
[youtube https://www.youtube.com/watch?v=VRCM0jWEQjQ&w=560&h=315]

***Looking at you, Sand Snakes! After a strong start, you three are really getting on my nerves. Like, I can hear how their lines would be awesome if they were coming out of Oberyn, but they seem weirdly high school theater-y when coming from someone who used to star on Nick Jr. 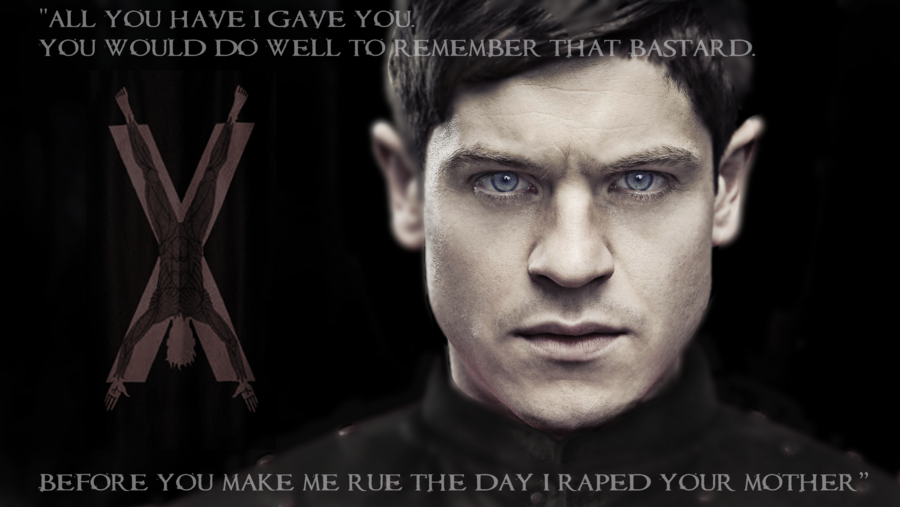