Here’s the state of comic book shows on TV right now: there’s a crap ton of them. There’s the dark and gritty (and amazing) over on Netflix with Daredevil and the dark and gritty (and depressing) on AMC with Walking Dead. Fox has my old friend Gotham, which is neither properly dark nor gritty but one time a pre-teen Bruce Wayne mercilessly beat a classmate’s face with a watch so it has its moments. NBC tried (and most likely failed) with Constantine, while half the CW’s ratings come from Arrow, iZombie, and The Flash. It’s that last one. The Flash, we’ve gathered here today to talk about. Because these myriad comic book shows right now, they’re all different, they all range from reasonably well-done to fantastic, but most if not all them fail at one thing: they don’t feel at all like an actual comic book. They don’t feel properly over the top, properly pulpy, properly fun.

Then The Flash went and said fuck that, fuck you, we’re putting an 800 pound telepathic gorilla in this thing.

Now, admittedly I haven’t seen much Flash. I watched the pilot, and it was in fact so much fun but it was also bogged down by CW’s tendency to say “if they LIKE that, then they’ll LOVE it with a love triangle.” But last night was special, because if you think anyone should miss out on the CW’s attempt at a CGI gorilla main character then I’m not sure you posses a soul, friend.

And CW…nailed it? No, they did. They totally nailed it. This was the most comic book-y a show can get without just literally showing you pages from a comic book. This is what Gotham wants to be so bad, what the Dark Knight movies and their thoughtfulness would have been downright appalled to be compared to. Some back story: Grodd from the comics is different. Grodd from the comics hails from a city of advanced gorillas called Gorilla City, because they were advanced enough to be telepathic but not quite advanced enough to come up with a more clever name than Gorilla City.

Grodd from The Flash is more of a science experiment that was enhanced by the particular accelerator explosion that pretty much started this show and gave Barry Allen his powers. And, like all former science experiment gorillas gifted with the power of mind control, Grodd is pissed.

This leads to countless outstanding things, such as:

The fact that The Flash team not only didn’t embarrass themselves with their CGI, but it looked incredible. True, they went with the Alien, shadowy less is more style for most of it, but Grodd full-on looked fantastic.

Also, ALSO, can we discuss how when the explosion happened people were aware Grodd escaped his cage? But it wasn’t a problem until right now? Like a regular gorilla running amok is something to shrug your shoulders at but now that we confirmed he has mind powers, we should probably look into this.

People have reported hearing “strange, animal-like noises” in the sewer that, surprise, it’s Grodd. The only way that would have been better is if they had said “strange, gorilla-like noises.” None of this is a critique by the way. This is all amazing. I haven’t been entertained by TV this much in forever.

Then, when Joe, Cisco, and Barry go to investigate, they bring a banana. They actually bring a banana. This is amazing. Then, later, when Grodd is literally forcing Joe to point a gun at his head through mind control, Joe pulls out that very same banana. “Is this what you want? Here. Have it,” he says. What an awful thing to assume, honestly, that a telepathic gorilla just made you hold a gun to your own head just to get that one specific banana. That’s wrong. That’s ape-ist.

There’s a fight scene between the Flash and Grodd, which involves Grodd catching the Flash’s Supersonic Punch because, well, he’s a big strong gorilla, so that was great. But really, it’s more than that because you actually find yourself rooting for the CGI gorilla. I mean, no, you don’t want Barry to die but you also really want Grodd to be okay, too. The show genuinely succeeded in making Grodd a sympathetic character. A side effect of his mind powers is Barry, and the audience, gets flashes into the lab experiments conducted on Grodd, and they’re horrific. And yet Grodd repeatedly refers to Dr. Wells, the man responsible for the experiments, as “father,” because that’s all Grodd knows.

In the end, the Flash only prevails because his love interest repeats the words “do it for me” over the headset while piano music swells, lest you forget this was the CW. Then Grodd gets hit by a train. We see later he survives but still, again, poor fucking Grodd man.

So thanks to The Flash and more importantly, thanks to Grodd, for reminding me and hopefully reminding every other comic book based TV and film out there that when done right, this whole super hero thing can actually be kind of fun. 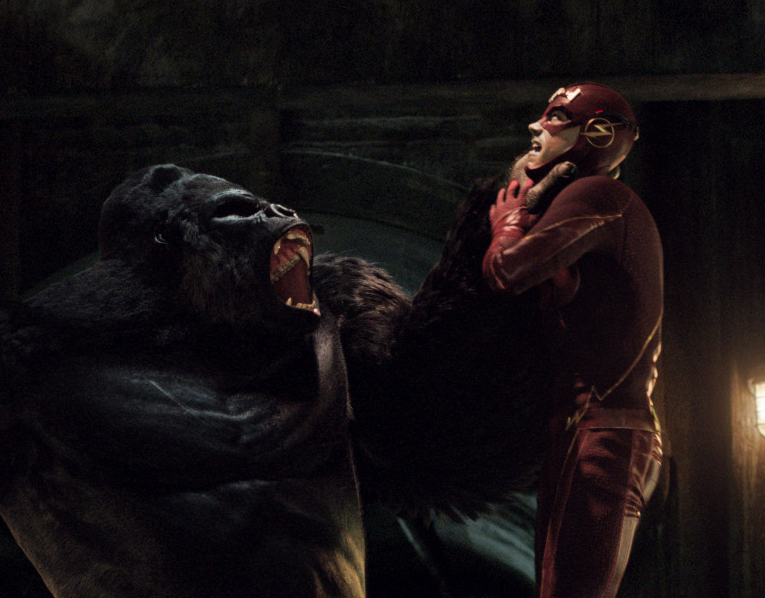