Farce comes in assorted sizes, but The D Train is so preposterous that even though it starts out as a regular fit, before you can label it, the shrinkage has reduced it to a bin for bargain basement rejects. By the time it ended, I was ready to send it back for a refund.

Jack Black does his best work since Bernie, and James Marsden, in a studied effort to move above and beyond his Ken doll image, emerges as more than just another 8 by 10 glossy, so their oddball chemistry is intriguing; it must be admitted that they are both very good. They work up quite a lather trying to save a movie that is so unusual it deserves to be better, but The D Train is so confusing it’s hard to track what anyone had in mind.

The first-time writer-director team of Andrew Mogel and Jarrad Paul are not experienced enough to guide the actors or the movie beyond a promising outline. It starts out as another in a long line of silly “high school misfits carry shame and guilt into adulthood” flicks in the disastrous class reunion genre. Then it takes a left turn into the realm of dark and serious psychological introspection that promises more than it delivers. So many t’s are uncrossed and i’s undotted that the movie is a mess. Still, I was fascinated by what it might have been.

Mr. Black plays Dan Landsman, a lifelong cretin from Pittsburgh who used to be the school’s most repugnant dweeb. Now he has a wife and teenage son, but he’s still such a social misfit that the biggest thrill of his life is his position as self-appointed chairman of the alumni committee for his high school reunion. None of the other graduates are interested in attending.

Then—caramba! He accidentally spots an old familiar hometown face named Oliver Lawless (Mr. Marsden), a cool dude from high school, now ripped and shirtless, selling Banana Boat sunscreen cream on a national TV commercial. If he can persuade a real celebrity to attend, everybody will buy a ticket! So he Googles Oliver, flies to Hollywood and meets him for a beer, impressed beyond reason when his old buddy actually says hello at the bar to Dermot Mulroney. What he doesn’t know is that Oliver is a coke-snorting, pill-popping washout who is a bankrupt pretender. He is also bisexual, and before the drunken night ends, he seduces square, bewildered Dan.

From the sex scene on, The D Train just gets edgier and more unhinged. Things weird out when Oliver pretends to be a corporate honcho who launches a phony business deal with Dan’s boss and also shows up unexpectedly to attend the class reunion as Dan’s houseguest. From here, the screenplay slips through the cracks into dragon country. Dan is jealous. Dan seems to want the one-night stand with Oliver to continue, elaborately concealing his true feelings from his wife, who wants to know why the two men are wearing the same colorful underwear, and why the buttons are ripped off the shirt Dan wore to L.A.

After what seems like a leap year of red herrings, the trajectory builds at last to the bewildering 20th anniversary of their graduating class in the gymnasium, where Oliver destroys Dan’s reputation in front of the whole town, once and for all. To say none of this resembles real life is like saying Diet Coke contains artificial sweeteners.

Either there’s a lot of explaining nobody bothers to do, or I missed the point completely. Is Dan a latent homosexual, or does he endure the seduction scene (replete with nudity and kissing) because he’s flattered that the school’s most popular jock has, after 20 years, finally accepted him as an equal? The characters are broad, but they all seem to be harboring some secret the viewer is never allowed to share.

Jack Black has never been more sure-footed and mature and James Marsden has never been looser or loucher. They both seem heads above their material. Kathryn Hahn is fine as Dan’s wife, but as written, her character is illogical and clueless. They’re all playing whatever the scene requires as it sputters and jumps through all the mood swings. The third act plays around with ideas of sexual identity that never ring true. The tepid and inconclusive ending, when the two men embrace with tenderness and tears to show their vulnerability, leaves everyone dangling. And, by the way, it is never quite clear why Dan calls himself “The D Train.” There isn’t a subway within 300 miles. ν 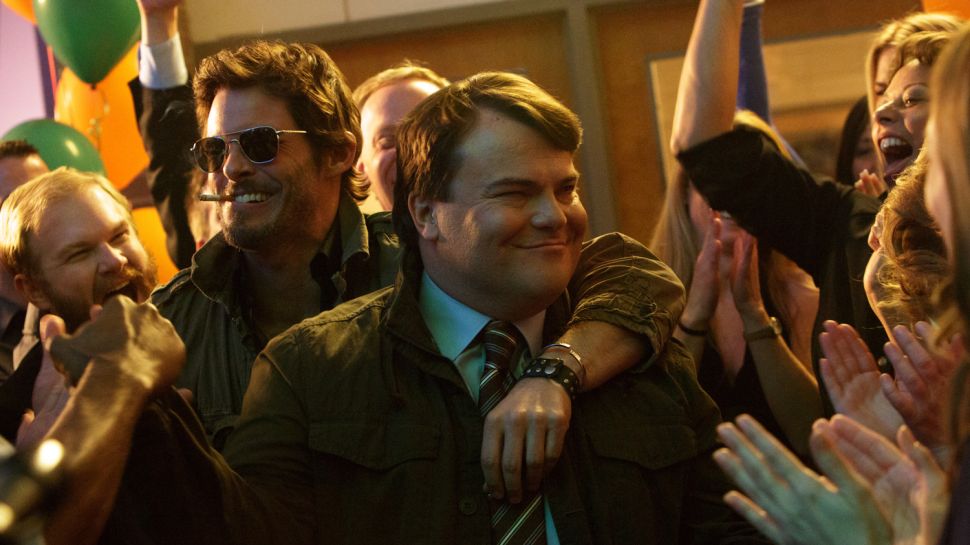