My friends and I are huge hip-hop fans. We used to joke around that the world would be much better place if our nation’s leaders settled their issues over diss tracks. Can you imagine Barack Obama dropping some bars over the “Control” beat? There would be no wars, no scandals and no foreign crises with our leaders keeping the beef on wax.

I thought we were one step closer to a better tomorrow with Jay Z’s recent comments directed at the biggest names in music. Over the weekend at his “B-Sides” concert, Jay Z had some choice words for those that are competing against his music service Tidal.

I don’t need no middlemen to talk to my n*ggas / I understand if you don’t understand I figure I’m Jigga / That’s where we differ / I take what’s mine you accept what they give you, I get you /  I don’t take no checks, I take my respect / Pharrell even told me ‘Go with the best bet’ / Jimmy Iovine offered a safety net / Google dangle ‘round a crazy check / I feel like YouTube is the biggest culprit / Them n*ggas pay you a tenth of what you supposed to get

This was definitely not “Takeover” but it got his point across, he’s frustrated with the reception his music service has received.

Yes, Tidal’s launch was a disaster from the beginning. The music service is touted as a “premium” outlet with HD quality music. And it talks about representing the artists and making sure they’re paid what they’re worth. Which is all great in theory. It’s the execution he got wrong. Literally anything would have been better than having some of the biggest names in music play the victim card and talk about how they need to get paid more.

Think about what else he could have done:

I’m a huge Jay-Z fan. I count Reasonable Doubt as one of my favorite albums and my writing has been heavily influenced by Jay Z’s rhymes (which is funny because when he writes, he doesn’t write. Right?) But the launch and his most recent comments show that he’s missing the point—and that he is out of touch with the very consumers he’s trying to reach and convert.

Consumers will gladly pay for quality products. That’s what makes this country (‘merica) and capitalism great. But the moment you try to pull one over consumers is when they’re gone. Jay Z, Kanye West, Madonna, Rihanna and everyone on that stage are not fooling anyone.

They’re not hurting for income. And yes, while the music model is antiquated and needs a shakeup, it’s not going to come from someone who routinely makes the Forbes list.

One would think that Jay Z, of all people would understand this. After all, it was on the underrated remix of Kanye’s “Diamonds From Sierra Leone” that Jay rapped “I’m not a businessman, I’m a business…man.”

(If you haven’t heard the line yet, just go to any tech meeting with white, middle aged B/D guys. It’s like they got together, had a summit and decided to make it their catch-phrase.)

But despite my hopes and dreams, businessmen don’t diss brands and don’t diss consumers who don’t use their service. Jay Z went full Ricky Bobby.

As of fan of both Jay Z and Kanye West, it’s been interesting watching their careers go in separate directions following their 2005 collaboration.

Kanye West, while releasing critically acclaimed albums like Graduation, My Beautiful Dark Twisted Fantasy and Yeezus over the past ten years, has struggled to break into other industries, such as fashion. It’s as if he’s always had the artistic chip on his shoulder. It’s that passion and honesty that has made him so polarizing. Yet it’s that same erratic, visceral behavior that has worried the decision makers in the industries he’s tried to break in to. An artist can’t run a business.

Jay Z on the other hand continued along the business path and among other things, became CEO of Roc A Fella Records, launched a champagne brand, and sold a clothing line. While his musical output wasn’t up to par with his previous work, it could be excused, seeing as how his focus seemed to lay in business. And perhaps it’s because of Jay Z’s state of mind and “business first” outlook that allowed him to make the most out of opportunities presented to him. He’s been a businessman first, a rapper second.

But with the hurried launch of Tidal (we see you, Apple) and with his most recent comments, Jay Z is looking to get back to hustling roots to get Tidal out of a tight spot. Unfortunately, I don’t think he can “sell water to a well” on this one. 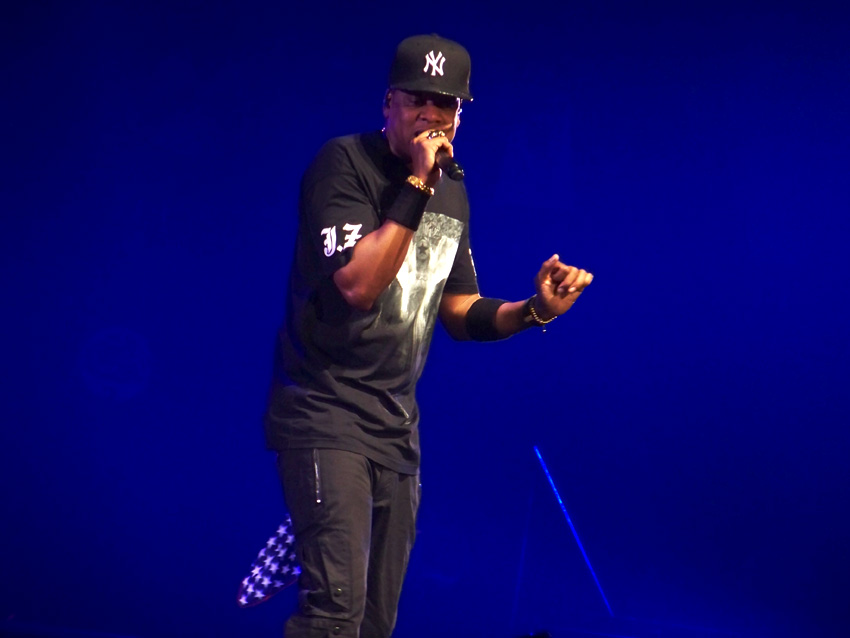