“I don’t mean to intrude,” the bartender said to the forlorn-looking man hunched over his cocktail. “But you look like the weight of the world is on your shoulders. You just lose your job or something?”

“No,” the man replied with a mirthless smile. “I’ve got a great job—and that’s the problem.”

“So what’s the problem?” the bartender asked.

“Did you happen to hear what the other candidates have been saying when they talk about themselves?”

“Yeah—well, I’ve got them right here,” he said, whipping out an iPad. “Here’s Ted Cruz announcing for president. He talks about ‘heading off to school over a thousand miles away from home, in a place where he knew nobody,’ where he was alone and scared, and his parents going through bankruptcy meant there was no financial support at home, so at the age of 17, he went to get two jobs to help pay his way through school.”

“Now—here’s Marco Rubio. Listen to his announcement.” On the iPad, Rubio was saying: “Both of my parents were born to poor families in Cuba. After his mother died, my father had to go work when he was 9 years old. My mother was one of seven girls raised by a disabled father who struggled to provide for his family … Here in America, my father became a bartender, my mother a cashier, a maid, a Kmart stock clerk.”

He swiped to another video.

“And Gov. Scott Walker? He goes all over the country talking about how his preacher-dad worked the grill at McDonald’s, and paying $1 for a sweater at Kohl’s. Here’s Ben Carson—raised by a single mother who couldn’t read. Here’s John Kasich: son of a mail carrier from a blue-collar town in Pennsylvania.”

“So,” the man said, taking a long pull on his drink, “what’s my guy supposed to say? His father was president; his brother was president; his mother is a Daughter of the American Revolution; his grandfather was a U.S. senator. You’re supposed to pull yourself up by your own bootstraps; Jeb probably had his custom-made by John Lobb in London. You’re supposed to face hardship, struggles. What have I got to work with? The day the family ran out of Chablis just before the Dover sole was served?”

He shut the iPad down and shook his head.

“Look, I get it. You want the voters to know that you fit the American Dream, that you’re a living symbol of opportunity, from the Log Cabin to the White House. And that symbol came from William Henry Harrison in 1840, so it’s not exactly new. Even if you’re rolling in dough, you want to let people know you’ve suffered; why do you think Hillary talked about being ‘dead broke’ when she and Bill left the White House, even with tens of millions in book deals and speeches waiting for them?”

“But it’s starting to sound like that old Monty Python sketch, where four smug rich guys in dinner jackets compete to see who started out the worst. ‘We lived in a box.’ ‘You had a box?’ Does being well born really mean you’re automatically out of touch?”

“I guess not,” the bartender said, “But take Mitt Romney…”

“Exactly. Every Republican is thinking about what happened last time, when our nominee was so clueless that he told kids that if they didn’t have money for college, they should borrow it from their family. Then there was the story about the special elevator for his cars! But does that mean that an affluent family disqualifies you? Does anyone think F.D.R. and Eleanor clipped coupons? Or that JFK had Jackie buy her clothes at Sears? They seemed to connect pretty well with the average Joe. And nobody seemed to mind that Jeb’s old man was an Andover-Yale-Skull-and-Bones aristocrat in ’88; it was only when the economy tanked that they turned against him. Of course,” the speechwriter added, “41 was a war hero … come to think of it, so was JFK—and Roosevelt had polio. Maybe the voters forgive privilege if you’ve had a brush with death. But my guy? Healthy as a horse, dammit.”

“Sounds like you’ve got quite a challenge on your hands,” the bartender said. “Pour you another? Johnnie Walker Black, right?”

The speechwriter shook his head. 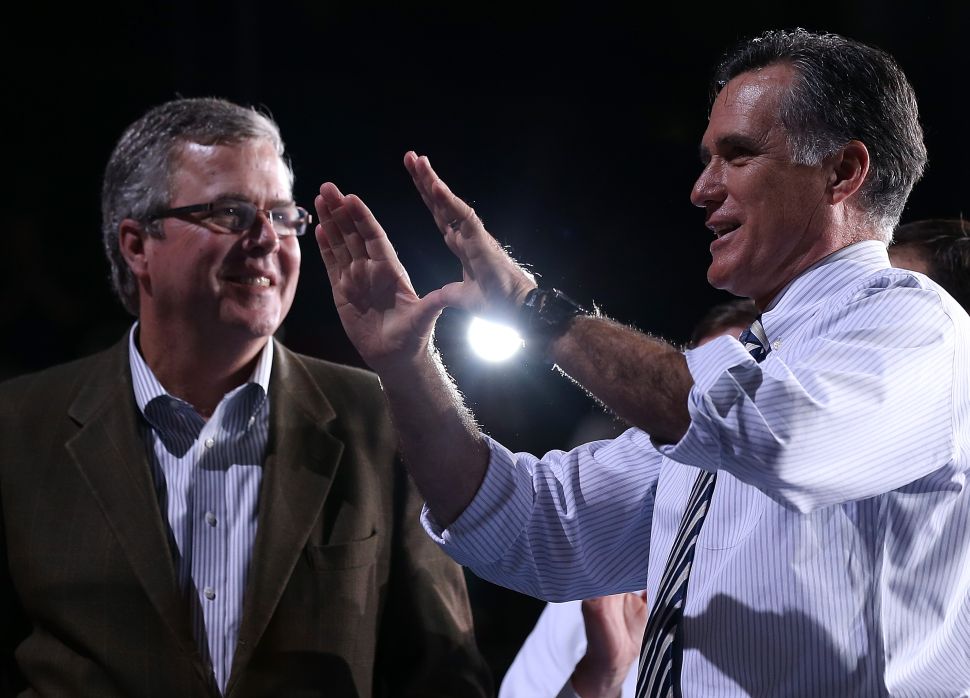