“Do one thing every day that scares you.” Whether you know that old chestnut because of Eleanor Roosevelt or because of those ubiquitous Lululemon bags, the directive is a valuable, if often forgotten, one. In a world that’s ever safety-first, it can be easy to avoid all risk. Why take the chance?

I’ll tell you why. Fear is essential—to moving forward, to fulfilling potential, to living life not just to the fullest but really, to living life at all. Some of life’s most rewarding experiences are those that inspire great fear. This can mean doing something you didn’t think you were physically capable of—cruising through the Arctic on the back of a snowmobile in pursuit of polar bears, maybe, or hiking through the Utah desert. It can also mean doing something you knew you were capable of—whether because others had done it before you or because you’d prepared for it—but which scared you anyway. Like giving birth. Or running a marathon. Or simply trying an adventurous new food while out to dinner in a foreign country (or even just out to dinner at the restaurant down the street).

We all have our fears, some of which we’re born with, or predisposed to have, but most of which we pick up along the way. Everyone’s fears are different. Maybe you fear speaking in public. Perhaps the thought of quitting your job to take a chance on entrepreneurship scares you. Falling in love: That can also be a pretty frightening prospect for many, even for those who think they want it.

But if you think back to some of the more rewarding moments of your life, you might realize that many, if not most, originated in fear. There’s a reason for that: that which doesn’t kill us really does make us stronger. We often talk about the value of taking “calculated risks,” or those risks that are well thought out—the most rational of risks—but there’s also certain value in taking risks that, if you thought about them a little harder, you might not take at all. Traveling to a remote island might require a trip in a tiny plane, but once you’re there, well, you might have the time of your life. Jumping out of an airplane—perhaps not entirely advisable, but those who have done it say it’s among the most thrilling experiences of their lives. Those risks, which seem foolish at the time—well, they have some great benefits.

What we get from such experiences is more than just bragging rights, the ability to say we’ve done it. Such experiences can also give us the confidence we need to take more mundane risks, like asking for that raise we know we deserve or telling someone how we really feel. It’s true that as a culture, we’re becoming more risk-averse. We convince ourselves that what we have is fine, whether it’s the job, the relationship, or the parenthood status. Sometimes that’s true—what we have is fine and pining for otherwise is more about the grass being greener than any real discontent. Oftentimes, though, deciding what we have is okay is the easier way out. It’s settling. And what we need to get out of that mindset is a real jolt—physical or otherwise.

Here’s the thing about risk. Risk opens you up to new challenges, new people, new opportunities. People who take risks are more creative, and learn, through risk, what they really want. The act of taking a risk also means that you may push to make things work. When you put yourself out on a limb, with a no-excuse approach, your natural problem-solving skills kick in. You’re open to new ideas, and you’re willing to try something new. You fully participate in your life.

If you’re a parent, there’s another reason to learn to take risks: Reasonable risks are healthy for kids. We are starting to realize that helicopter parenting often backfires, and has unintended consequences: namely, kids who lack confidence and are averse to taking even the most well calculated risks. Risk taking is a part of growing up. No one wants to raise a careless risk taker, of course. But if your kids see you taking risks in a healthy way, whether it’s trying a new food or a displaying a curiosity to experience new cultures, they’re more likely to do so as well.

Because we all have our own hangups, it’s difficult to prescribe one-size fits all approach to risk taking. But what I will say is that the easiest way to take more risks is to say yes more often. Saying yes typically keeps you on your edge, and keeps you from being complacent. We may not all be able to have foreign adventures or participate in extreme sports, at least not every day. But even the smallest every day risks work to build your self-confidence and self-respect, empowering you to feel stronger and more confident in taking on new endeavors. Even the smallest yes can send you on a road toward progress—and to learning that what you thought was out of our reach wasn’t so far out of the realm of possibility, after all. 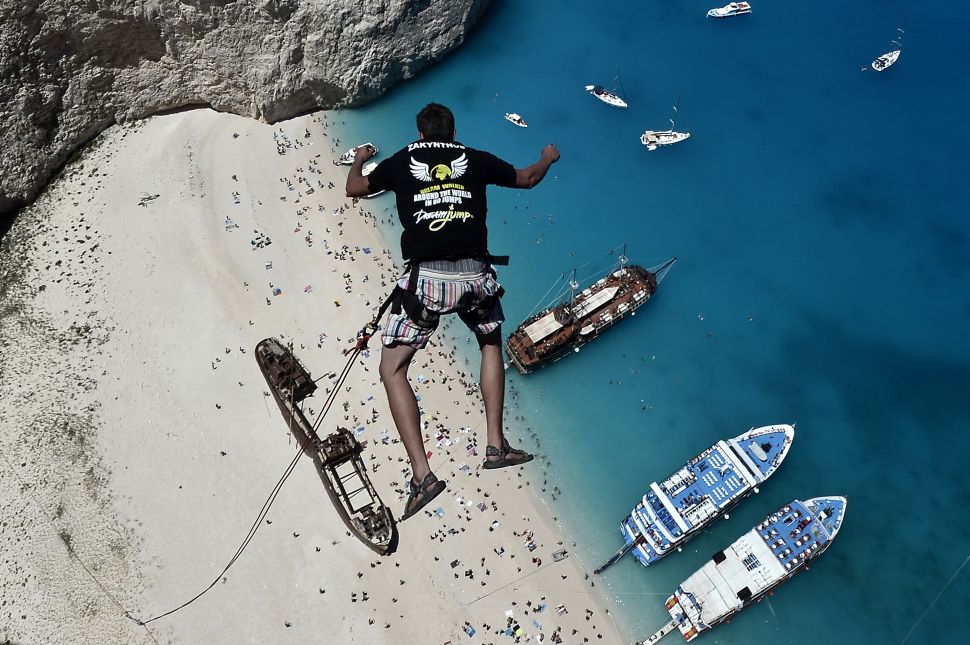