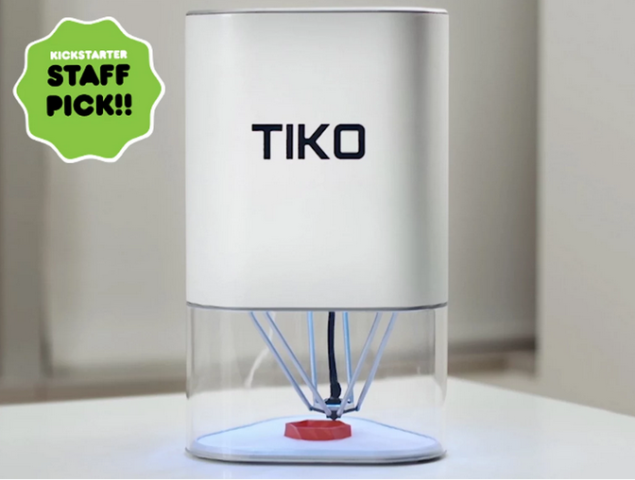 When we last talked with the folks from Makerbot, we discussed how 3D printers will soon be household appliances as common as microwaves, vacuums and well, regular printers. But they agreed that certain design and affordability standards need to be met first. Little did we know, a 3D printer set to meet those standards was being developed in Toronto as we spoke.

We’re talking about Tiko, the meticulously designed and shockingly affordable “unibody” 3D printer that’s had the industry’s experts and publications buzzing. The $179 3D printer surpassed its Kickstarter goal of $100,000 in three hours and finished up its campaign last Friday with a total of just under $3 million in pledges.

Tiko looks nothing like any 3D printer you’ve seen before. While most have a multipart frame, Tiko’s frame is one piece with three sets of arms that move in unison, essentially eliminating issues of misalignment or inaccurate prints associated with other products. The New York Observer spoke with Tiko founder and CEO Matt Gajkowski, who explained that Tiko’s unique design is actually essential to its affordability.

Are you out to make a commercial 3D printer for the everyday person? Something for enthusiasts in the industry? Who is this for?

If you look at our campaign, the subtitle is “the 3D printer you’ve been waiting for.” We believe there are people who have been wanting a 3D printer and have been window shopping, but haven’t bought one because they’ve been expensive, unreliable and haven’t been easy to use. We figured we would be making it more accessible to those people. It’s for those who want to learn something new and try new technology. It seems people from all sorts of walks of life came to make this happening.

Tiko’s design is drastically different than any other 3D printer out there. Why did you design your printer this way, and why hasn’t anyone else done this yet?

Some of the first 3D printers came out 10 years ago, but technology was much more primitive then, and the 3D printers made today are based on that. It just seems like there was a certain momentum in the design philosophy, and it took a little bit of what some may say courage, and some may say stupidity, to make something designed differently. And I would say it turned out for the best. I think on some level we thought incremental results wouldn’t do it. We don’t believe in evolutionary innovation, but revolutionary innovation—something radically different.

How are you able to make this printer that appears to be so much better at a cost that’s only a fraction of the price of all other 3D printers?

There’s this prevailing way of thinking that sophisticated and advanced technology have to be mutually exclusive from affordability. We don’t think that way; we think one can be a driving force behind the other. We have to keep in mind that 120 years ago, no one had cars. Now we all do because of the manufacturing advancements, and they’re a lot less expensive. It’s about the technology of how it’s manufactured. That’s what’s made it inexpensive.

The unibody thing was difficult to get right. But it simultaneously makes for a printer that is less expensive. A lot of what we’ve done has been pushing the boundaries of manufacturing, working directly with manufacturers in China to make these complete parts more manufacturable.

Some people have expressed concern about the project, which is no surprise considering the recent highly-funded Kickstarter scams and projects that never made it through production. How far along is your prototype, what work has to be done and what challenges do you see ahead?

It’s the unfortunate reality that there are always bumps in the road, but we like to think the six months we’ve given ourselves [to manufacture the product] are comfortable. We know there could be unforeseen challenges, especially when we’re pushing these boundaries, but we have been working so closely with our manufacturers, which should eliminate the potential for a lot of problems. Mike was born in China, is fluent in Mandarin and has connections with the manufacturers, and we’ve had them involved as an integral part of the design process.

These next six months aren’t pre-production—they’re testing and making sure that, when we release our product, it will live up to people’s expectations. We’re still exploring little refinements, but Tiko works. We could ship out our prototypes now, but we know we can squeeze a little more out of it, and we’re being really careful with that.

According to one of your updates on the campaign page, raising so much money so quickly enabled you to start manufacturing a few weeks before the funding period even ended. How is the process going so far?

It’s going pretty well. It’s been a little less than a week since our campaign ended. We don’t actually get the money for a few weeks, so we’ve been doing what we can until then and have definitely gotten a head start. We’re focusing on the long lead time components so we can have the most time to test them. In a few weeks, we’re going to set up 20 to 30 units at least and just have them running day and night to test the longevity. We’re going to load them up with sensors and collect data and make sure they’re reliable.

Have you heard from any other the major commercial 3D printing companies like Makerbot or Cube? Surely they’d be concerned if your printer could outperform theirs’, especially at such a low cost.

I don’t want to say anything specific. There are so many companies in this space—some are friendlier than others. We’re all here for the same reason: to innovate and bring 3D printing to everyone. So were happy to be friends with whoever wants to talk.

Do you have plans for other versions of Tiko. Say a larger Tiko that can print taller objects?

I can tell you we’re a really innovative company and we have a lot of plans. We’re not a one hit wonder. We had a lot on our R&D list.

I read that you were born to be an entrepreneur. Is this just one of many ventures we’ll see from you? What else is up your sleeve?

I think that actually got changed at the last minute. It was meant to say that I was born to be an engineer and raised to be an entrepreneur. My parents were entrepreneurial, but I was taking things apart and building all the time. I’m not an entrepreneur for the sake of it; it’s so I can unleash these technologies and make things happen. 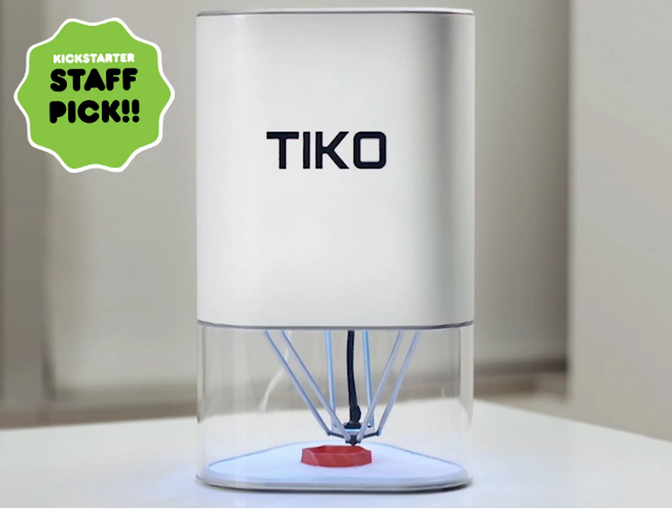