One of the greatest leaps of faith a person can take in life is to have a child. Life is never the same after you bring a defenseless human being into your world. And that’s just as it should be. Unfortunately, not everyone understands the responsibility that goes along with this.

This leads us to this episode of SVU entitled “Parents’ Nightmare,” which tells the story of a young boy being kidnapped from his school in broad daylight.

Owen, a trusting lad, leaves school with a man he sort of recognizes as a handyman his mom, Dana, frequently relies on to fix things now that she and Owen’s father are in the midst of a messy divorce. Things quickly escalate and the SVU squad rushes in to help locate Owen, who it soon becomes clear is being held for ransom by a man named Javier.

When Owen’s father, Sam, hears of the ransom demand, he steps up with the money, calms his jumpy wife, and goes to meet Javier in a basement apartment to trade the cash for his son. As the SVU team surrounds the building, Sam makes the exchange and rather uneventfully exits the building with Owen in his arms.

The fleet of foot detectives quickly corner Javier in an alley and arrest him for the kidnapping.

The immediate crisis has come to an end, but that’s clearly not the conclusion of this story.

In determining why Javier targeted Owen, the squad learns some interesting things about Dana and her ‘relationship’ with the man. At first, it seems as though she actually orchestrated the kidnapping, but then things take a turn and it appears that it was in fact Sam who arranged for Owen to be snatched. When confronted by Dana, who’s wearing a wire, Sam explains that it wasn’t supposed to be traumatic for Owen. The goal was simply for the boy to be held briefly in order to teach him not to be so trusting, and also to get scatterbrained Dana to take her role as a parent more seriously.

When Dana realizes what Sam has done and why, she’s a bit sympathetic, but the real shock for her comes when she begins to comprehend that her husband will most likely go to jail for what he’s done and she’ll be solely responsible for the care of their child, a concept that is obviously frightening to her. As Benson points out that she’ll need to step up for her son and may have to do something drastic, like say, get a job, the fragile and disorganized woman looks as though she may crumble under the strain of it all.

Thus concludes the examination of the case explored in this episode. Now let’s take a look at the underlying meaning of it all.

Regarding the technical aspects of this episode, one might notice the interesting pacing that took place here. For the first 25 minutes, it was a race against the clock until Owen was safely recovered. But then, things slowed down as the investigation into the motivation behind the kidnapping ensued. This combination of a ‘run and gun’ episode and what we’ve come to refer to as an ‘intimate’ piece made for an intriguing chapter in the series. In the end, there was no big ‘crime ring’ to bring down, no serial criminal to get off the streets. This was just about a really screwed up family, and yet it was still as compelling a tale as anything involving a clearly recognizable villain, or villains, of some sort.

Another interesting feature of this installment came near the end of the episode in a scene that featured just Dana and Sam. Scenes like this, that are absent of our featured players, are something that this creative regime introduced and apparently excel at. We don’t always need to have our heroes in every ounce of the story. In fact, employing this technique opens up new avenues of storytelling, something that has perhaps helped with the sustainability of the series.

The entirely of the storyline was interesting but the one scene that really stood out took place as Benson worked with young Owen to learn about the inner workings of his household. In a scene that maybe could have been cut a bit, it was refreshing to see that it wasn’t. Often, especially in procedurals, scenes feel ‘clipped’ as they’re manipulated so as to only serve the purpose of extolling information. This scene was allowed to ‘breath’ and for good reason – it reminded all why Olivia has this career (because she’s good at it!) and it felt a bit like a glimpse into Olivia’s mindset about how her relationship with her son might grow. Perhaps a small indication of how things might be in the future for her family unit? (Dare we hope that SVU continues for ten more years to see young Noah reach this point in his life!? Of course, all of this is assuming that the Olivia/Noah bond is secured, despite the obvious drama that is come with his father, but I digress….)

The most captivating part of this storyline was something that wasn’t on the surface but that lurked underneath all of it – the exploration of the contrast in parenting issues faced by Olivia and Dana. This facet of this piece surely wasn’t lost on any fan of SVU while watching Dana, a mom who doesn’t work and has time for yoga, yet still can’t seem to get her son ready in the morning, nor can she seem to be there on time to pick him up from school, while in this was juxtaposed with Olivia dropping Noah at day care, rushing in to take command of her squad, all the while most likely knowing she can only dream about having the time to go to a yoga class in the middle of the day.

In fact, Sam best summed up Dana’s style of tending to her son when he, talking about Owen reaching out to her during his ‘kidnapping,’ says, “He called you. You weren’t there.” It couldn’t have really been made any clearer that Dana, who can’t keep track of her phone on a daily basis, obviously has problems understanding the level of commitment that’s actually needed to properly care for a child.

That’s one thing that can’t be said about Olivia – she knows all too well what it means to commit your life to protecting a child, or children. In that regard, one could say that her career has absolutely prepared her for motherhood and all that it entails, a fact she’s most likely considered but never uttered aloud.

To this end, the title “Parents’ Nightmare” is extremely appropriate here. Notice that it’s not “Parent’s Nightmare” in the singular version, meaning something affecting just these particular parents, but rather it’s in the plural formation, noting that it means all parents.

Seeing a child improperly cared for is an agonizing thing to witness. Whether you yourself are a parent or not, I think we can all agree that there’s really nothing more painful than realizing that someone who’s a parent really shouldn’t be. This episode took an interesting line in showing that Dana wasn’t a totally incapable parent; she wasn’t evil or sadistic, she was just extremely clueless. Sadly, for every amazing parent out there, there are probably just as many like her. These types of parents are rarely featured on episodic television. We mostly see the extremely overprotective type or those at the other end of the spectrum who do unspeakable things to their kids. Telling this story in this manner is a nice way to help bring this ‘family’ oriented season of SVU to a conclusion.

As this penultimate episode of SVU is now in the books, the stage is set for the finale next week and while I have no in-depth scoop to offer right now, I do have it on good authority that as expected, it’s a big episode with many familiar faces from this season, and the entire squad, in play. What’s going to go down is being kept tightly under wraps, just the way it should be. But if this season has taught us anything it’s that when it comes to family – whether personal or professional – nothing is static. And we all know change be joyful or it can be painful. But, when it comes to being a parent, whether traditionally, symbolically or otherwise, that’s all part of the journey and you just have to have faith that somehow things will all work out for the best. Much like watching a child grow, you know that ultimately only time will tell just where it will all go. 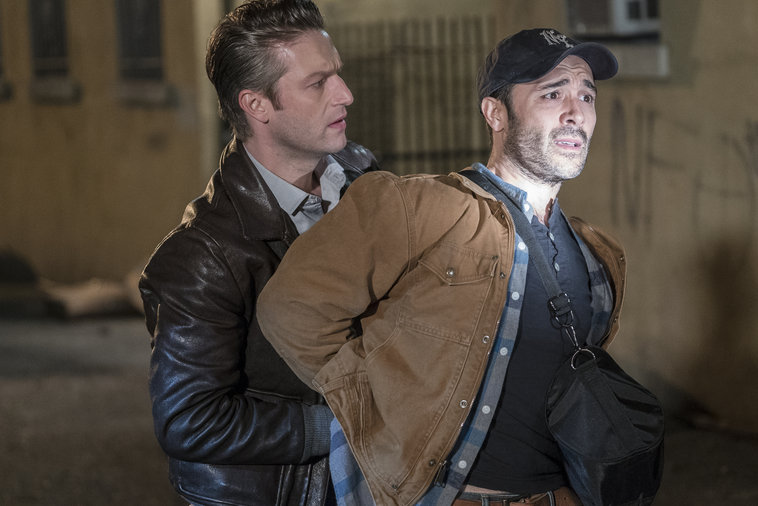