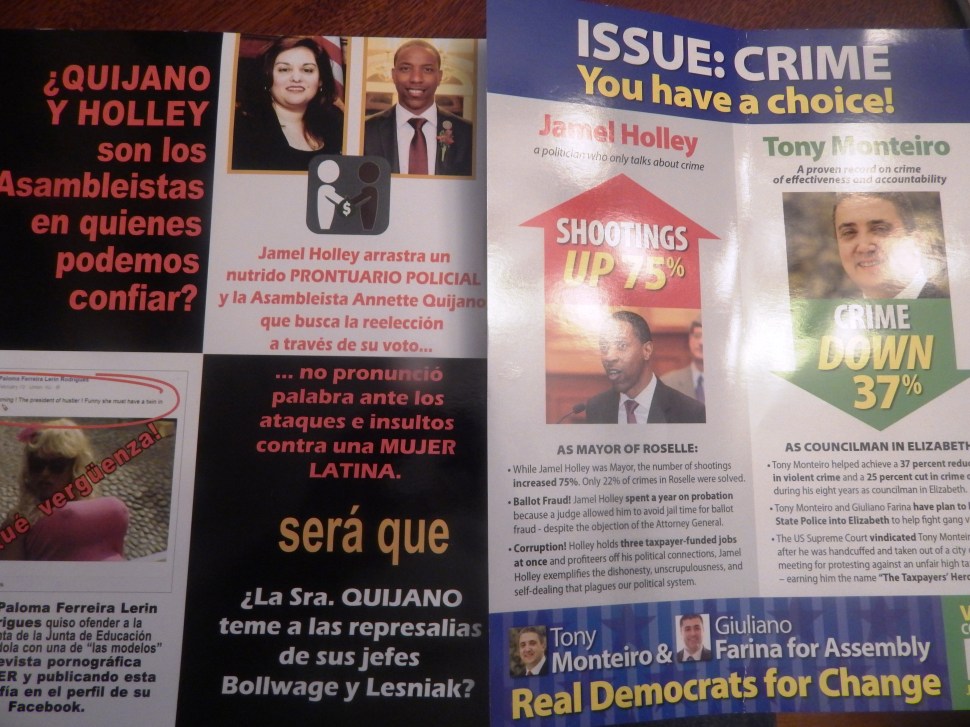 Mail originating from the challengers in LD20.

ELIZABETH – The air war in Elizabeth carries the usual pungent aftershock of public careers in tatters and reputations destroyed, as the same combatants keep climbing back into the fray, like reanimating armies without end.

A lot of the main salvos right now down the final days of the campaign season in front of June 2nd originate from Tony Monteiro, one of the Elizabeth Board of Education’s longest-serving soldiers, who’s focusing the bulk of his attacks on incumbent Assemblyman Jamel Holley (D-20) of Roselle.

“We don’t have their money,” he told PolitickerNJ, a reference to the Union County Democratic establishment that backs Holley and Assemblywoman Annette Quijano (D-20). But, the implication is, they will hit hard anyway.

In attack mode, Monteiro dredged up part of Holley’s past, a ballot fraud case that sent the former mayor Roselle before a judge, where he entered a pre-trial intervention program. “Our attacks are all on point,” Monteiro told PolitickerNJ. “They’re not personal attacks. I haven’t seen this yet, a case such as that of our current assemblyman, who faced ballot fraud charges and received PTI. In a case like that, anyone else would never have been allowed to serve in elected office.”

“Tony Monteiro calling out anyone’s integrity, let alone someone like Jamel Holley who has devoted his entire life to public service, is the height of absurdity,” said Quijano/Holley Campaign Spokesman Mike Makarski. “Monteiro claims he wants to lower taxes but he just passed a school budget with a massive $7 million tax hike. He’s throwing around negative accusations at the same time he and his allies were caught misusing $300 million in federal school lunch funds and he’s been reprimanded by the state ethics board for his shady conduct. To top it all off, we’re talking about a so-called Democrat who not only endorsed Chris Christie, he served on his transition team! Tony Monteiro is throwing out these desperate attacks because he knows he’s headed for another big loss on Tuesday.”

Even as he sits on a board backed up to a final handful of members with the majority, his friend Rafael Fajardo pulling out a series of unforeseen political contortions to ensure dominance – at least for the moment as the board plays defense – Monteiro wants to accomplish now what the court didn’t do then: eject Holley from public life.

“I feel really good about the campaign,” said the veteran School Board member. “We’ve been on the ground for last two months. Our intel is telling us that [Assemblywoman Annette] Quijano is not doing any campaigning and it’s creating divisions within the campaign between her and Holley.” 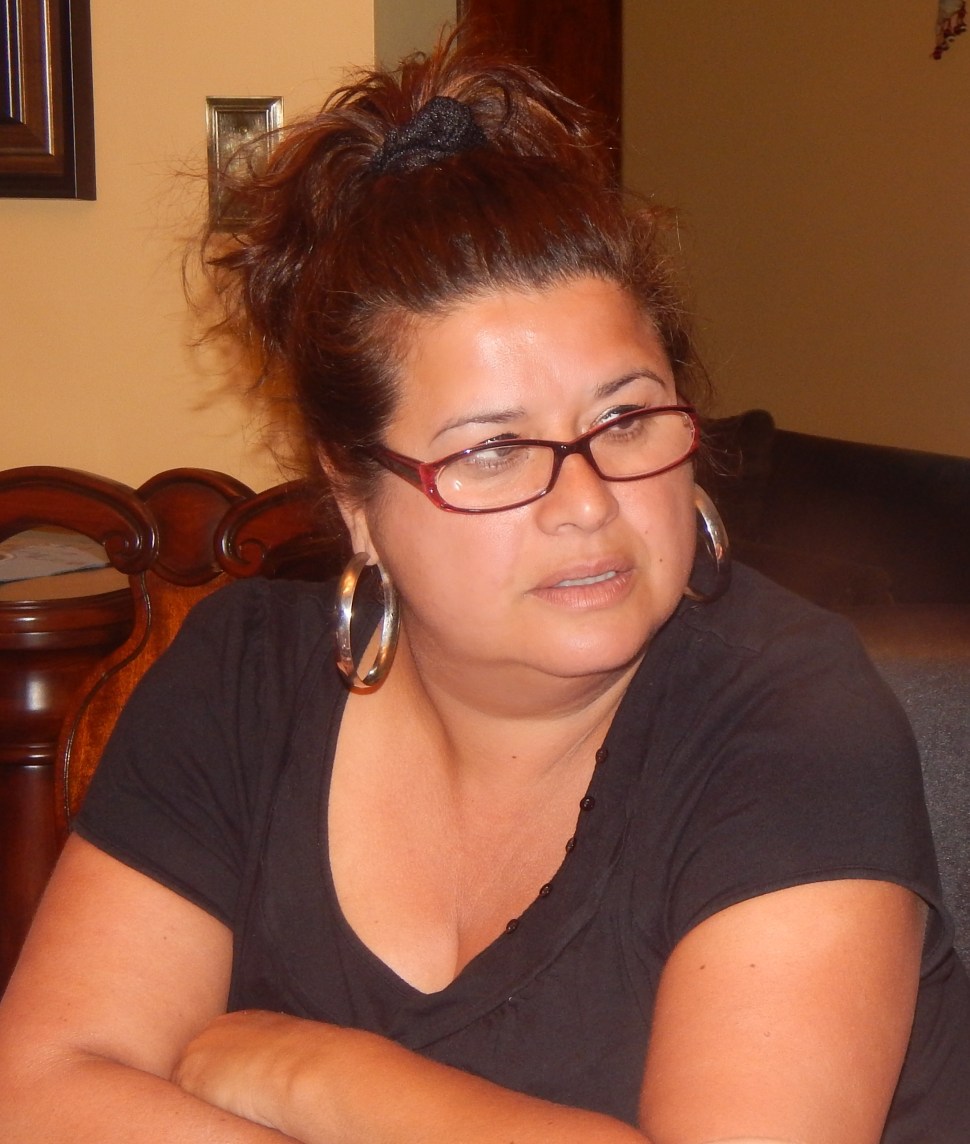 But as buzz dogs Monteiro concerning BOE strategy and a perceived prioritization of simply keeping a majority on the board come November as opposed to making inroads into the legislature next week, there’s another issue hovering out there, this one directly over Monteiro, namely the switch from Team Bollwage to Team Fajardo of Ana Maria Amin. Amin won a School Board seat last year that appeared to send Monteiro and his Board of Ed allies into the minority, only to turn around in the election’s aftermath and side with Monteiro to preserve Team Fajardo power.

PolitickerNJ sat down this evening (article to appear tomorrow) with a group of mothers – several of them special needs moms – ready to express their displeasure with the School Board at the ballot box next Tuesday. They want to punish Amin by blocking Monteiro from becoming an assemblyman. The mothers say they are tired of Monteiro using the Board of Ed dais for a campaign platform, and Board of Ed emails as political propaganda.

As for Amin, Mayor Chris Bollwage allies like Paloma Ferriera Lerin Rodriguez have the war paint on in advance of Tuesday. “She ran with our ticket,” Ferriera told PolitickerNJ, looking back at last year’s school board election. “I started introducing her to people. She came to my house. She ate. She told us, ‘We’re going to work on issues related to special needs kids.’ She said ‘We are going to bring back neighborhood schools.’”

Then Amin flipped. Now – ahead of another November School Board Election where control will once again be at stake – Monteiro is the closest campaign target.

“I think their anger is very misplaced,” said Monteiro. “Why are they so angry? I made the mistake of trying to have a dialogue with them Look, I’ll dialogue with anyone. All I said was ‘Why are you all so upset? How did she [Amin] betray you?’ They said she didn’t do the right thing. I said, ‘What exactly is the right thing? We’re all doing the right thing.’ Ana Maria Amin is there for all the people, not just special needs.

“You know what’s ironic about that night? She didn’t flip that night. She was selected as president and she voted for their [Team Bollwage] agenda. Then it dawned on her that she didn’t want to be vindictive and vile and she was so disgusted that she flipped in the next meeting.”

He’s keeping his focus on Holley.

The latter in response appears focused on an aggressive campaign work rate, especially in his hometown of Roselle, where he wants strong turnout to assist his ally, Mayor Christine Dansereau. But he’s been elsewhere too, campaigning in Elizabeth with Councilman Manny Grova, and in Union Twp., home to Monteiro’s running mate Giuliano Farina.

When it comes to Farina, a teacher in the Elizabeth School System, Monteiro’s as effusive with praise as he his vociferous in his condemnation of Holley.

“A wonderful person,” Monteiro said of his running mate, who earlier today campaigned alone in the Third ward, slow rolling in his SUV through a neighborhood generously speckled with Holley/Quijano and Monteiro/Farina signs. 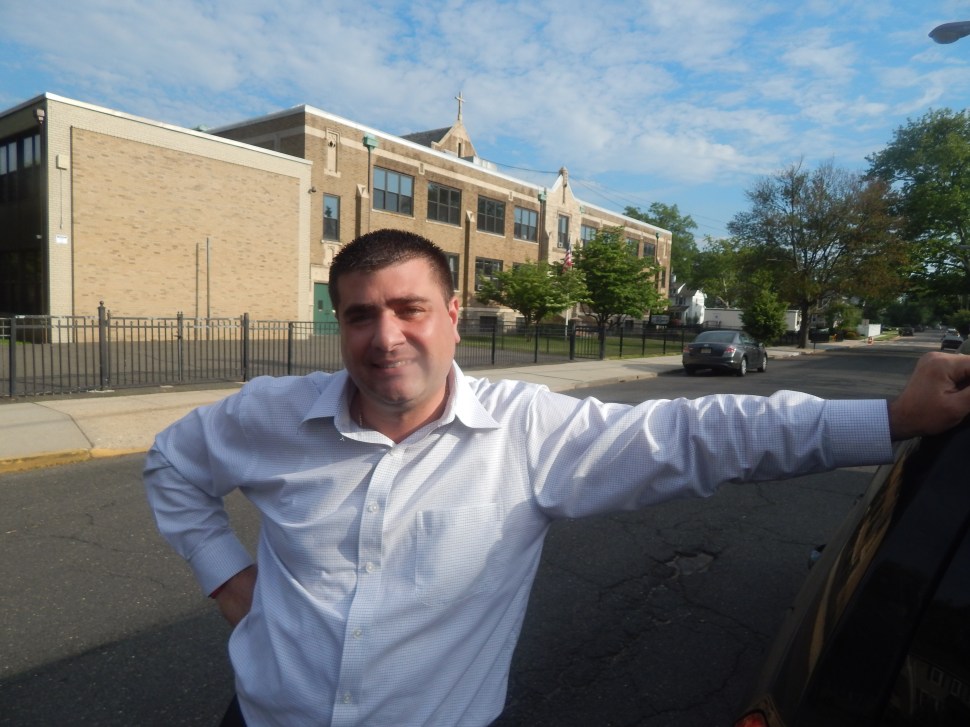 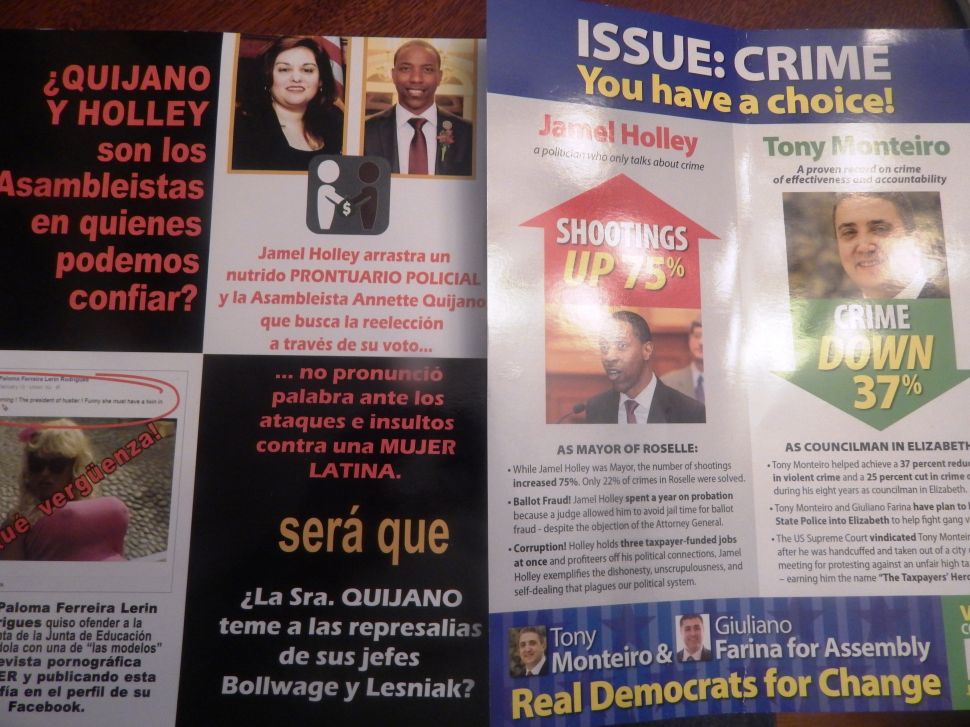