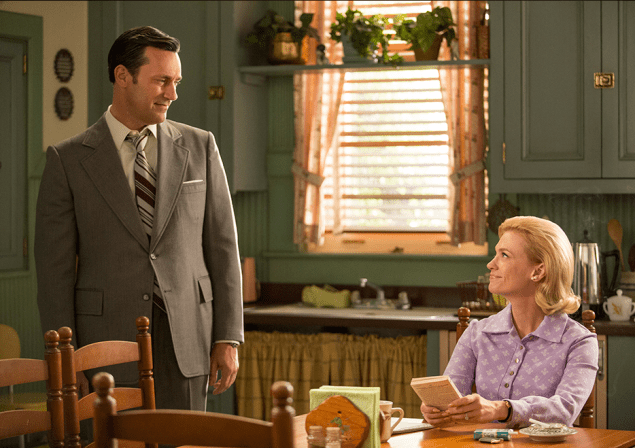 In “Lost Horizon” we see the dismantled ruins of the old SC & P offices. As the old offices are in shambles, to varying degrees, so are the lives of the old SC & P employees, some of whom are making the McCann transition faster than others.

For Don, what Jim Hobart sold as “advertising heaven” is just a nondescript labyrinth of a soulless cube farm, and one that he can’t seem to navigate. Fortunately for him, his helium -voiced secretary Meredith has become the most competent person on the whole  goddamn show and is handling every aspect of his life, including decorating his new and not yet livable apartment now that he’s staying at the Plaza during this transitional period. Somehow, we get the feeling that this transitional period doesn’t end with Don at McCann. For starters, there’s the fawning testimonial from Hobart who likens Don to his own personal white whale and claims to have acquired the company just to land him. Unfortunately, being the corporate equivalent of a stuffed and mounted trophy doesn’t exactly light a creative fire under Don. He completely checks out during a meeting with all the creative directors concerning the development of a “diet beer,” a meeting that will lead to McCann-Erickson’s iconic 1974 Miller Lite “Tastes Great, Less Filling” campaign. Of course, Don can’t stick around for that. During a presentation about the demographics of the standard beer drinker, lives in the Midwest, likes sports, relentlessly loyal to his beer brand, Don gets distracted by a plane flying over the Empire State building, picks up his lunch and walks out as the researcher leading the meeting rattles off statistics. Ted smiles at Don presumably doing what he threatened to do and ultimately couldn’t, leave advertising behind.

After what feels like a warm, farewell backrub to a Freud-reading  “Birdy” after a botched attempt to drive Sally off to school, we see Don assuming the role of hobo in the Cadillac and name-checking Jack Kerouac to his passenger, the ghost of Bert Cooper, who wisely speaks for all of us when he tries to talk Don out of his impromptu trek to suburban Michigan to track down Diane the diner waitress.

When Don pulls up Diane’s old home, he assumes the identity of the researcher giving the Miller presentation back at the office and puts on the ruse that he’s trying to track her down because she won a drawing for a fridge full of free beer. It’s a bit unsettling to see how easily Don slips into another persona. Just as he liberated himself from the psychological shackles of Dick Whitman by becoming Don Draper, the fact that he’s now a prized whale, caught and ready to be mounted has made the day to day of being Don Draper a bit too stifling as well.

Sadly, Don isn’t being nearly as convincing as he thinks he is as Diane’s ex-husband, played by Mackenzie Astin (The best Astin! Sorry, Sean!)  dressed like a Mormon, calls him out as another one of her suitors sniffing around for the damaged woman after she inevitably evaporates into the ether. There’s also an uncomfortable moment where Don realizes he’s staring the daughter she abandoned right in face and doesn’t seem to disagree with her when she says she’s entitled to anything her mom might have won.

Don doesn’t find what he’s looking for, which is just as well. What makes this tragic brunette so much more desirable than all the others is that she’s just out of reach. Although Don already blew off meetings with important clients for this failed mission, he figures he might as well pick up a hitchhiker and take him to St. Paul, which is in the opposite direction of New York. Maybe Don will end up in California after all.

Back at the McCann, the acquisition of SC & P claims its first casualty  in the form of the glass ceiling crashing firmly down on Joan’s head. She endures a brash McCann accounts bro tanking her call with Avon by inviting an executive in a wheelchair out for some holes of golf. She tries to solve the problem by having Pete Campbell transferred to the account, but gets stuck with Ferguson, who tries to sleaze his way into a weekend away with Joan. You know you’re dealing with some real pieces of shit when Pete Campbell looks the most respectful to women by comparison.

Joan seeks some post-coital advice from her boyfriend Bruce Greenwood and he gives her the advice that’s always worked for him. Unfortunately, it’s advice that’s always worked whe  wielded  by a man dealing with other men. When Joan marches into Jim Hobart’s office with Bruce Greenwood’s two pronged either-threaten-legal-action-or-hire-a-guy-who-knows-a-guy plan of attack, Hobart cuts her off right at the knees, offering just half her half a million dollar stake in the company in exchange for her getting the fuck out. Roger talks her into taking the deal and our beloved Joan goes out with a whimper rather than a bang. she was right to want to burn the whole place down.

If we needed any more proof that women aren’t taken seriously at McCann, there’s also the fact that Peggy is copy supervisor and doesn’t even have an office yet. The office makes a concession by offering her a space in the typing pool, but she’s content to haunt the remains of the SC & P offices with Roger, who is avoiding fading into irrelevance on the 26th floor, which is apparently McCann’s equivalent of a geriatric wing for convalescing ad execs. The two share some great scenes over an old bottle of vermouth and the moment with Roger at the organ with the roller skating Peggy gliding by has already been .GIF’d into oblivion. However, the key moment in Peggy’s superhero origin story comes when Roger gifts Peggy Bert Cooper’s creepy The Dream of the Fisherman’s Wife hentai painting. The thought of hanging such a confrontational piece of art challenges her long held belief that she needed to make men feel at ease.

“Who told you that?” an incredulous Roger asks.

And with that, a delightfully Peggy strides into the office with a cigarette hanging out of her mouth, and her sunglasses on, gliding through like a boss bitch and gripping the painting so that it faces outward. God forbid someone doesn’t catch a glimpse of the octopus pleasuring a naked woman as she strides on by. 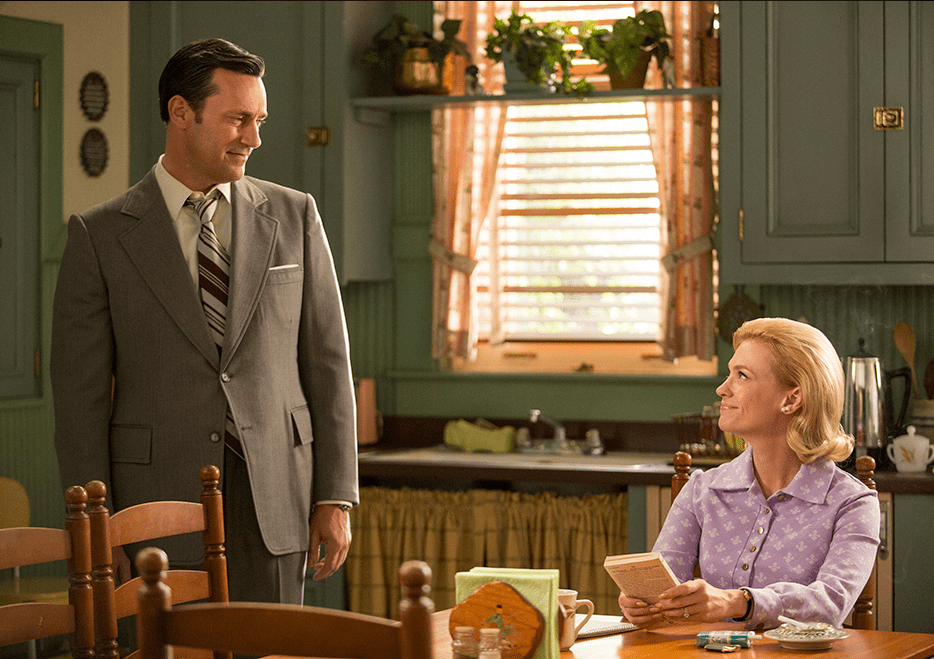