So much for the theories that Don was going to tumble out of a skyrise or that he’s DB Cooper.

Also, so much for the notion that Betty’s cancer would tether Don back to his children and back to New York. After Sally spills the beans that her mom has six months to live, Don’s insistence on taking custody of the kids is shot down by the fact that Betty has already made arrangements for her brother to raise Sally and the boys. Also given that Betty was already living on borrowed time, how long was Sally realistically supposed to sit on that secret? Anyway, given the fact that the mother of his children doesn’t see him as a stable and reasonable caregiver, Don is effectively off the hook and left to drift through west in until he eventually shows up greasy and unshaven on his pseudo-niece Stephanie Horton’s doorstep. At this point, Don has shed everything, including his family and is just reduced to an envelope full of cash and a Canadian tuxedo when he shows up at her fake niece’s door. As for Stephanie, she’s just as much a mess as she ever was, so if Don can’t be the rock for his own kinds, at least he can take care of her by giving her Anna and the OG Don Draper’s, and by proxy Megan’s old engagement ring to sell.

Stephanie is wise enough to know that this greasy hobo can’t reasonably save her, but she makes an attempt to save him from whatever turmoil landed him on her doorstep. Being the free spirit that she is, Stephanie decides that she’s going to take Don, or in this case, Dick Whitman, to her creepy meditation retreat in Big Sur. Unfortunately, she abandons him after Don tries to give her the same “You’ll be surprised at how much it never happened,” counsel he gave Peggy in season 2 after learning she’s wrestling with the guilt of giving an unwanted baby away. If there was ever a lesson Don needed to learn, it’s that you can’t just repress trauma and move forward like it never happen. Well, it’s one of several lessons Don needed to learn and he seemed to finally realize that when he called Peggy and tearfully confessed his litany of transgressions, including identify theft and fraud.

Don’s phone call to Peggy rounds out the trifecta of phone calls to the three most important women in his life, the mother of his children, his daughter, and his protege. Peggy was on the receiving end of the most unsettling call and being understandably shaken, reached out to her work husband Hot Stan. It was here that Matt Weiner saw fit to give us the definitive rom-com ending that I honestly didn’t think would happen with Hot Stan’s vulnerable confession of love and the fact that he rushed up to her office and kissed her in a moment that launched a thousand Tumblr gif posts. Hot Stan’s character has evolved a lot over the past four seasons, from Peggy’s chauvinistic rival to her supportive, but pleasantly combative ally. He’s the perfect foil and partner for Peggy, As TV writer Alex Reid pointed out, that dynamic is telegraphed by the fact that Peggy’s telephone cord is tightly wound while Hot Stan’s is loose.

However, Peggy and Hot Stan’s long overdue hookup shouldn’t overshadow her sweet send-off with Pete. Given the couple’s tumultuous past, it was nice to see them come together in a moment of mutual respect and admiration, with Pete telling Peggy that people will be bragging about working with her. The best part was Peggy’s horrified reaction over 1980 being so far away when Pete predicts that she’ll make creative director by then.

Of course, it seems like that opportunity comes a little earlier when Joan is offered the opportunity to start her own production company making industrial films. After suffering a humiliating defeat at the hands of Jim Hobart, it seemed like Joan was on the verge of comfortably retiring on her SC & P buyout money and doing fingernail bumps with Bruce Greenwood, I honestly didn’t think we’d see Joan again, let alone watch her pick the shards of the glass ceiling out of her hair and forge her own path, but that’s exactly what she does. After shooting Peggy some insanely lucrative freelance work writing scripts, Joan offers her the option of partnering with her under the new venture under the guise that she needs two names to make it a real firm, in this case, Harris-Olson. However, when Peggy stays put, Joan just uses her own names Holloway-Harris for the budding start up she’s expertly running out of her apartment. Hey, she said she needed two names, she didn’t say that they had to be anyone’s other than hers.

Also, if I had to wager on a character who would have to make a choice between career and romance, it wouldn’t have been Joan, but that’s exactly the ultimatum Bruce Greenwood gives her and he ultimately joins Greg Harris, Roger Sterling, and Bob Benson on her funeral pyre of ill-timed or ill-intentioned suitors.

While everyone else seems to get definitive endings, Betty quietly smoking in acceptance of her fate, Roger presumably getting married to the feisty Marie Calvet, Pete boarding a Learjet with the very Jackie O looking Trudy, Peggy receiving a sweet forehead kiss from her real life Brawny paper towel guy before getting right back to work, Don receives the show’s most ambiguous ending, which is what anyone would expect from a writer who cut his teeth on The Sopranos.

After being abandoned by Stephanie, and unloading onto Peggy, Don is left emotionally and spiritually exhausted, vulnerable and probably in the best condition to muddle through various tai chi classes and touchy feely group therapy sessions. Ultimately, it wasn’t the sad diner waitress Don was looking for, but a broken middle aged man who was consumed by the grief over being ignored by his family members and fading into life’s background. There was something cathartic in hugging that man and it showed when Don cracked a satisfied smile while participating in a group meditation session. You’d think he had finally reconciled the duality of Dick Whitman and Don Draper and achieved some sense of peace with the broken vows that he confessed to Peggy.

And with the cynical cut over to the iconic 1971 McCann-Erickson “I’d Like to Buy the World a Coke” ad spot, where the actors act as analogs to the participants at the spiritual retreat. we’re left to ponder if enlightenment is just the springboard to another great idea, another slogan, and a handy way to sell a product.

Sure, Don shed his car, family, apartment and belongings, but he never truly sheds being Don Draper. Just as he was searching for that one great idea in the pilot episode when coming up with the slogan for Lucky Strike, was that smile during meditation simply the tip-off that he finally found it? 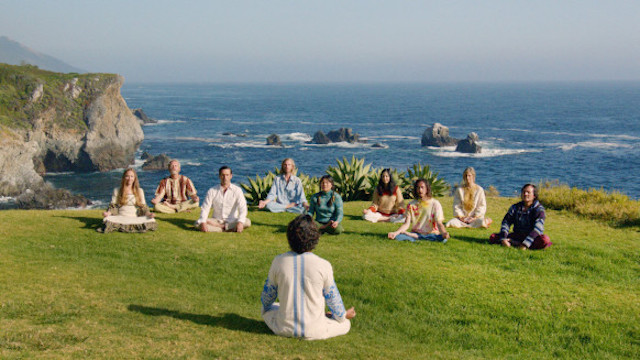