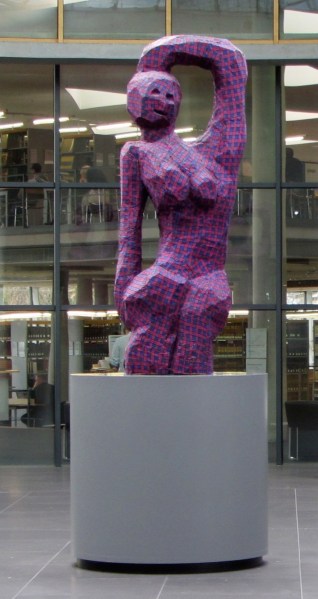 German art superstar Georg Baselitz, discussing his new commission for the town of Glyndebourne’s prestigious opera festival in the London Guardian yesterday, chose to repeat and expound upon his 2013 claim that, “Women don’t paint very well,” but wanting to be fair added: “It doesn’t just apply to painting, either, but also music.”

Mr. Baselitz gifted the world a few other nuggets of wisdom on the fairer sex, explaining that “if women are ambitious enough to succeed, they can do so, thank you very much. But up until now, they have failed to prove that they want to. Normally, women sell themselves well, but not as painters.”

Even more disturbing was the artist’s suggestion to Kate Connolly of the Guardian that “the market doesn’t lie,” in reference to the fact that the prices paid for artworks produced by men–particularly at auction–far exceed those of artworks authored by women.

Born in East Berlin in 1938, Mr. Baselitz is considered one of the first Neo-Expressionist artists and has found wide acclaim for his upside-down painting style and liberal reference of his country’s ignominious Nazi past. He shows his work with Gagosian and White Cube in London and is in the collections of most every major museum, including the Guggenheim (which turned over the whole museum to him in 1995),The Tate and the Hirschhorn.

Mr. Baselitz probably hasn’t heard of something called the gender pay gap; an American population survey begun in 1979. While the earning gap has shrunk from roughly 65 to 85 percent since 1979, the survey has never found pay to be equal between men and women and applies to almost every field imaginable, including the arts.

Therefore, one could choose to follow the flawed logic that higher prices for male artists prove that they are “better” than their female counterparts at making art. But in actuality, the art market is a system (like many) that was designed by men and leans towards their tastes and needs. Couple that with the fact that a large majority of art buyers–who are advantaged via the gender pay gap–are also male, and it shouldn’t be hard for even a child to understand that male art and artists are likely to benefit from such a system.

In the interview, Baselitz went on to bore readers about what a controversial provocateur he is while simultaneously discussing artworks he recently made for both an opera festival and Barney’s New York. (What a rebel!)

The real question here is “what percentage of the art world shares Mr. Baselitz’s addled brand of thinking?”