Mr. Obama “entered office believing America was too hard on our adversaries, too engaged in too many places, and that if we just took a step back, did some ‘nation building at home’–ceding leadership to other countries–America would be better liked and the world better off,” Mr. Rubio said at a Council on Foreign Relations event.

“He demonstrated a disregard for our moral purpose that at times flirted with disdain. He criticized America for having ‘arrogance’ and the audacity to ‘dictate our terms’ to other nations,” Mr. Rubio continued. “From his reset with Russia, to his open hand to Iran, to his unreciprocated opening to Cuba, he has embraced regimes that systematically oppose every principle our nation has long championed.”

Since entering the Senate in 2011, Mr. Rubio has shifted his foreign policy positions to the right, adopting many of the same muscular talking points of the Bush era GOP. In a Republican primary, his attacks on Mr. Obama’s various overseas initiatives, including normalizing relations with Communist Cuba and striking a tentative deal with Iran to limit their ability to build nuclear weapons, are popular. The emergence of the extremist Islamic State in the Middle East has given credence to the thought, in Republican circles, that Mr. Obama’s approach is feckless.

Mr. Rubio praised former President John F. Kennedy, a Democrat, for his firm opposition to Soviet Russia during the Cold War. He, as expected, invoked Ronald Reagan, the Republican president who presided over the Cold War’s end.

“Since the end of the Cold War, the threats facing America have changed, but the need for American Strength has not. It has only grown more pressing as the world has grown more interconnected,” Mr. Rubio said.

He chastised Mr. Obama for Russia’s invasion of Ukraine, the ongoing civil war in Syria and the rise of ISIS occurring under his watch. He pointed to China’s incursions in the South and East China seas. He blamed the president for North Korea’s nuclear arsenal and cyber-attacks launched on the United States and allies.

“Most threatening of all,” Mr. Rubio said, “we’ve seen Iran expand its influence throughout the Middle East and threaten to annihilate Israel as it moves closer to a nuclear weapons capability. The president’s proposed deal with Tehran will likely lead to a cascade of nuclear proliferation in the Middle East and could force Israel to take bold action to defend itself, making war with Iran even more likely.”

In 2012, Mr. Rubio backed negotiations with Iran over their nuclear program. But the charismatic senator, just 43, sees a different path for himself now. He contrasted himself with Ms. Clinton, who served as Mr. Obama’s first secretary of state.

“We simply cannot afford to elect as our next president one of the leading agents of this administration’s foreign policy–a leader from yesterday whose tenure as Secretary of State was ineffective at best and dangerously negligent at worst,” he charged. “The stakes of tomorrow are too high to look to the failed leadership of yesterday.”

Mr. Rubio said he would return defense spending to the baseline of the 2012 fiscal year, before sequestration cuts took effect. He bucked libertarians in his party, like Sen. Rand Paul of Kentucky, in calling for the full renewal of the Patriot Act.

“Some will argue that with all the fiscal challenges facing our nation, we simply cannot afford to invest in our military,” Mr. Rubio said. “The truth is we cannot afford not to invest in it. We must remember that the defense budget is not the primary driver of our debt, and every time we try to cut a dollar from our military it seems to cost us several more just to make up for it.”

Ironically, he found himself on the same side of Mr. Obama on the Trans-Pacific Partnership, a 12-nation Pacific Rim free-trade agreement . Many Democrats and labor unions oppose the agreement, arguing that it will lead to American job losses. Mr. Obama and Republicans champion the reduced barriers to trade as a boon to America and Asia.

“Those such as Secretary Clinton, who preach a message of international engagement and ‘smart power’ yet are not willing to stand up to special interests and support free trade, are either hypocritical or fail to grasp trade’s role as a tool of statecraft that can bolster our relationships with partners and create millions of American jobs,” Mr. Rubio said.

Mr. Rubio preached an unabashed interventionist vision. He argued America, as a democracy, has a moral obligation to go overseas to free people from oppressive regimes. He warned of “radical Islam” as the “source of atrocities” in the Middle East.

“As president, I will support the spread of economic and political freedom, reinforce our alliances, resist efforts by large powers to subjugate their smaller neighbors, maintain a robust commitment to transparent and effective foreign assistance programs, and advance the rights of the vulnerable,” Mr. Rubio said.

The story has been updated to reflect that the TPP free-trade agreement includes 12 nations, not 11. 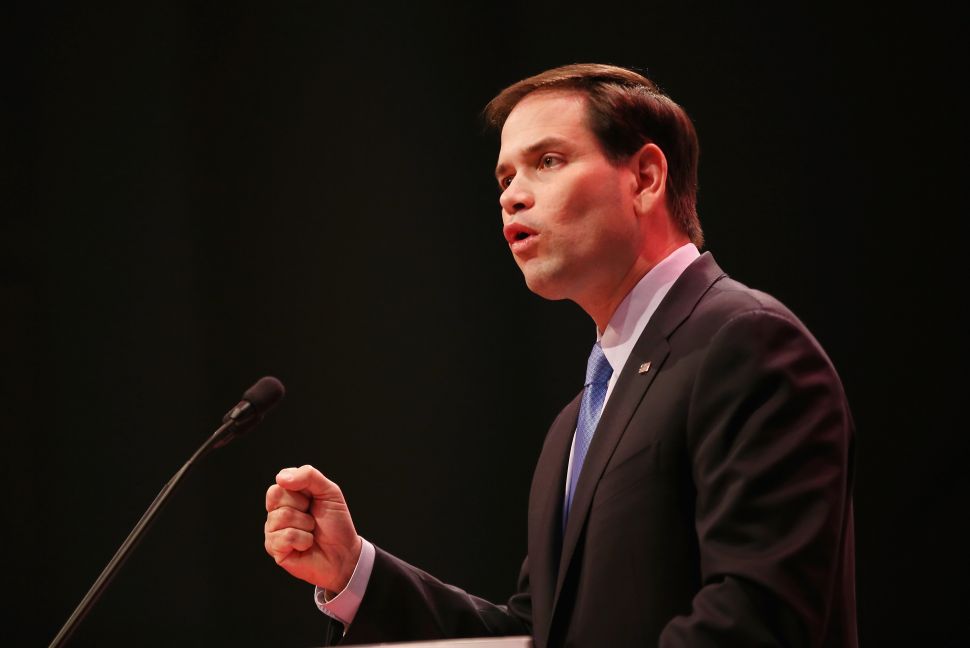