On Friday May 1, activists from Gulf Ultra Luxury Faction (GULF) organized a sit-in at the Guggenheim Museum and demanded a meeting with board members to discuss the state of workers rights at the museum’s Abu Dhabi location. The protest is the fifth unsanctioned action by the group to date.

At noon, GULF, a branch of the Gulf Labor activist group, unfurled a large, red banner at the base of the museum’s Rotunda that read “Meet Workers’ Demands Now!” and released thousands of red and blue pamphlets inspired by the artwork of On Kawara (the artist’s retrospective is currently on view) from balconies above, according to Artinfo writer Mostafa Hedaya. Protestors sang chants over the live reading of Kawara’s ongoing performance project “One Million Years,” and announced that they would occupy the space until they were able to meet with board members. Their list of demands were distributed on flyers that read:

WORKERS BUILDING GUGGENHEIM ABU DHABI DEMAND: A LIVING WAGE; DEBT JUBILEE – A fund to settle all recruitment debts; RIGHT TO ORGANIZE. This is an indefinite occupation in solidarity with the workers and their demands.

The museum stopped admitting new visitors shortly after the protest began and NYPD arrived at the scene. Another group gathered simultaneously outside the museum to protest, accompanied by artist collective the Guerrilla Girls, who are widely known for their own socially critical artwork and actions often directed at major museums.

The museum remained open during the protest until approximately 2:30 p.m. when it closed to the public, but allowed GULF members to stay.

The Guggenheim has been met with widespread criticism over its treatment of workers building the new Frank Gehry-designed location on Saadiyat Island in Abu Dhabi. Accusations against the museum include harsh transit and recruitment fees, seizing passports from migrant workers, substandard living conditions, low wages, and brutal work schedules. Investigations from the Human Rights Watch have been ongoing since 2009, according to the Times, which launched its own investigation into the conditions of workers building an N.Y.U. campus extension in the region in 2014.

Here, the Guggenheim’s latest statement on workers’ rights in Abu Dhabi, from February 2014. The group has been updating its Twitter with photos and videos since today’s action began using the hashtag #GuggOccupied.

The Guggenheim has provided the following statement to the Observer on the events that transpired Friday, May 1:

We are disappointed that the actions of today’s demonstrators forced the Solomon R. Guggenheim Museum to close its doors and turn away thousands of members of the public.

We have met with representatives of the group behind today’s demonstration on several occasions and have tried to maintain open lines of communication. We share their concerns about worker welfare in the Gulf Region, but these kinds of disruptive activities run counter to our objective of building the cooperation and goodwill necessary to further change on an extremely complex geopolitical issue.

Despite erroneous reports to the contrary, construction of the Guggenheim Abu Dhabi has not yet begun and a contractor has not yet been selected. In preparation for these milestones, the Guggenheim has been working with our partner, the Tourism Development & Investment Company (TDIC), and other authorities and stakeholders inside and outside of the UAE to continue to advance progress on conditions for workers.

The Guggenheim seeks, as we have from the start, to advance meaningful and verifiable actions. This is evidenced by our continuing contributions to the TDIC Employment Practices Policy (EPP). Significant and documented progress has been made on a number of fronts, including worker accommodation, access to medical coverage, grievance procedures, and retention of passports.

We believe the Guggenheim Abu Dhabi project presents an opportunity for a dynamic cultural exchange and to chart a more inclusive and expansive view of art history. These efforts at real action will take time to become a reality on the ground. We understand that this endeavor comes with great responsibility and we believe strongly in the transformative potential of the Guggenheim Abu Dhabi.

The statement can also be read in full on the museum’s website, here. 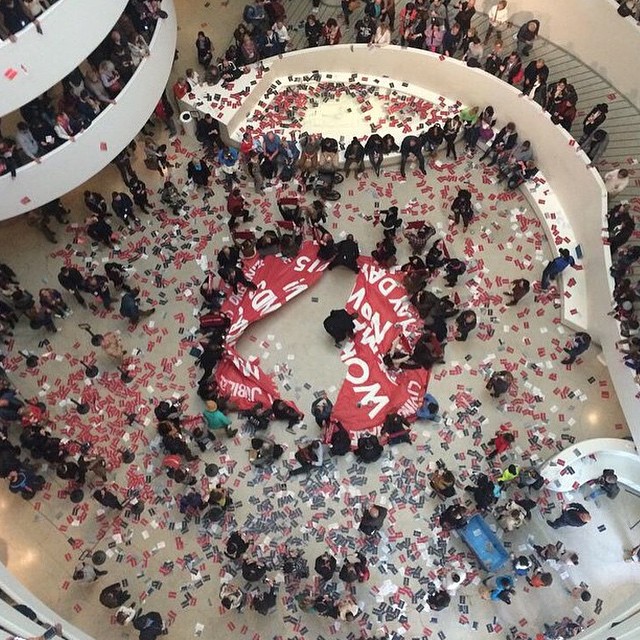