Hear Karen Dalton’s voice once, and it never leaves you.

Her soulful alto, warped and cracked and rich with a marrow-deep sadness, wraps itself around the handful of folk and blues sides she released during her lifetime, slipping between the shadows and salvation.

“Karen had a voice like Billie Holiday’s and played the guitar like Jimmy Reed and went all the way with it,” Dylan wrote in Chronicles, Volume 1.

Yet even Dylan couldn’t keep her from disappearing into obscurity.

Dalton died in southeastern New York of AIDS-related illness in 1993, but in the last few years, the Oklahoma native has enjoyed a commercial and critical resurgence, with Light in the Attic Records reissuing her only studio albums, 1969’s It’s So Hard to Tell Who’s Going to Love You the Best and 1971’s In My Own Time.

Now, on Remembering Mountains: Unheard Songs by Karen Dalton, Tompkins Square Records is showcasing an unseen side of her artistic personality: songwriter.

Both Dalton’s studio albums are comprised of covers—she arranged two traditional tunes, but recorded no originals—largely provided by the Greenwich Village folkies with whom she spent her days: Fred Neil, Dino Valente and Tim Hardin, among others.

In that context, Mountains is revelatory: the portrait of a craftsman of breathtaking, heretofore hidden talent, an artist well versed in both the joy and pain love can inflict.

The 11 songs on Mountains are culled from unreleased material Dalton’s friend and caretaker Peter Walker first published in a 2012 book about Dalton’s songs, poems and writings.

Inspired by Walker’s efforts, Tompkins Square Records owner Josh Rosenthal began reaching out to artists last year: “I didn’t have to ask that many people,” he said. “The people that I asked are the people on the record.”

“[Dalton] was one of the most authentic root sources of material for the folk music movement,” writes Walker in the Mountains booklet. “At the time she appeared, quick, competent, and full of purpose as she brought her artistic talents to bear on the political issues of the time.”

“People don’t know that she wrote and her writing is so good, people should know that she wrote,” Rosenthal said. “We’d love to know Karen’s original intent … but the truth is, it’s a song and just like Karen messed with older songs, re-arranged them, [and] sang them her way, these artists are doing the same thing with her material.”

A diverse slate of musicians tackles Dalton’s raw-nerved writings—Sharon Van Etten, Patty Griffin, Isobel Campbell, Marissa Nadler and Lucinda Williams deliver their own interpretations of what, in some cases, was little more than words on a page.

The results range from radiant (Griffin’s stirring, gospel-tinged take on “All That Shines Is Not Truth”) to harrowing (Julia Holter’s fuzz-filigreed “My Love, My Love” pulses with affection threatening to erupt into violence at any moment), allowing Mountains to double as a smartly curated survey of folk music’s elastic boundaries.

In her way, Dalton exploded the girl-with-a-guitar folk music stereotype—think of the ethereal delicacy of Joan Baez or Judy Collins—with her piercing, wounded voice, indebtedness to the blues, and formidable guitar chops.

Dalton also surrounded herself with the men who were shaping the Greenwich Village folk scene, assuming her place, unlike many women of the era, as a contemporary.

That strength—both artistic and feminine—helped inform the roster of artists Rosenthal assembled to breathe life into Dalton’s unreleased material, and helped underline Dalton’s role as a groundbreaking creative force.

“Karen’s career has a feminist bent to it, because she didn’t really have many contemporaries working in this style,” Rosenthal says. “The lyrics, for my ear and only speaking for myself, come from a deeply feminine perspective. … That’s why I chose all women for the album and I think it was the right choice.”

By no means are the Dalton archives emptied out on Mountains—Rosenthal said “there are maybe 10-15 more original songs” available in Walker’s book, although this may be the only Tompkins Square release.

As Karen Dalton’s music enjoys a well-deserved revival, what remains is appreciating its enduring impact, hidden in plain sight all these years.

“The fragility in her voice—she’s vulnerable—we hear that in a lot of these female singer-songwriters today, who I think, even if they may not be directly influenced by her,” Rosenthal said. “There’s no question if you listen to Cat Power, in some kind of way, you’re also listening to Karen. … It’s something in [Dalton’s] delivery and her cadence, the quality of her voice and just the sincerity of her work.” 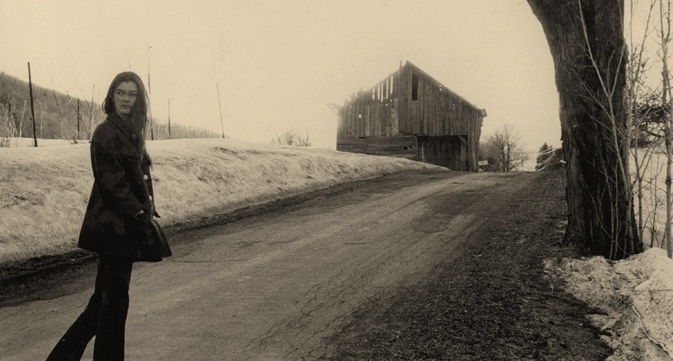