TRENTON – Senate Democrats today called for the Port Authority to fast-track construction of new rail tunnel between New Jersey and Manhattan  –as well as reconstruction and expansion of the Port Authority Bus Terminal — as the state continues to face ongoing transportation infrastructure problems. (Brush/PolitickerNJ)

TRENTON — The state director of one of the organizations behind a controversial lawsuit between public sector labor unions and Gov. Chris Christie’s administration over the funding of a broken pension benefits system said she was encouraged by the New Jersey Supreme Court’s hearing on the case here today. (Brush/PolitickerNJ)

NORTH BERGEN — Former township clerk Joe Mocco may have been taken off the political scene here more than 30 years ago, but the campaign of incumbent Mayor Nick Sacco says he’s still around — and is even working on the opposition’s team.

In a press release today more vitriolic than the last, Paul Swibinisk, Sacco’s campaign spokesman, alleged that Mocco is “back, running Lying Larry Wainstein’s campaign for mayor.” Mocco, who served both in town hall and as a local Democratic powerbroker in the 1970s and 80s, was indicted and sentenced to 20 years in prison along with nine others back in 1986 for racketeering, specifically for facilitating illegal garbage-dumping in the Meadowlands. (Brush/PolitickerNJ)

Noting police killings in Ferguson and New York City and a Houston Chronicle investigation that found “police have been nearly immune from criminal charges in shootings” in Houston and other large cities, Assembly Speaker Emeritus Sheila Oliver (D-34) on Wednesday announced she plans to introduce legislation to better ensure impartiality and boost community confidence by removing local prosecutors from cases involving a death from the action of a police officer. (Pizarro/PolitickerNJ)

Monmouth Poll: NJ voters want ‘anybody but Christie’ for prez

Few New Jerseyans believe Gov. Christie has the right temperament to be president and just 1-in-4 give him a decent shot at winning his party’s nomination, according to this morning’s Monmouth University Poll.  Garden State residents actually prefer to see the Oval Office occupied by Hillary Clinton, Jeb Bush, or Scott Walker rather than their own governor. (Pizarro/PolitickerNJ)

“[Doherty] made some charges about what he felt was the Governor’s lack of support for county and local Republican party organizations in 2013,” said Yudin, who declined to comment further on disparaging statements Doherty made about Christie’s 2013 strategy leading to what has become known as the Bridgegate scandal. “I couldn’t disagree more with the senator. My experience is exactly the opposite.” (Bonamo/PolitickerNJ)

The potential presidential candidate has said his “biggest governmental victory” was a 2011 law meant to fix once and for all New Jersey’s notoriously bloated and insolvent public pension system by imposing deep cuts. But on Wednesday Christie’s administration argued before the state Supreme Court that the law was unconstitutional, in a complex maneuver to defend $1.57 billion in additional pension cuts that appear to have violated its terms. If the court upholds a February lower-court judgment against Christie, as seems likely, the cash-strapped state must scramble to find the money before July 1. (Levine/Politico)

Lusitania: 100 years later; 60 from N.J. were aboard ocean liner sunk by Germany

Grace Hope French, a 24-year-old dressmaker from Passaic, was flirting with a handsome medical student when the torpedo hit. The Lusitania, the world’s fastest and most luxurious passenger ship, lurched hard to starboard, causing French to lose her footing and slide down the deck.

She searched for her good-looking companion, and then a life vest. Finding neither, French removed her coat, walked to the rail, and jumped into the Atlantic Ocean. (Maag/The Record)

GALLOWAY TOWNSHIP, N.J. (AP) — The leaders of a southern New Jersey university have hired a law firm to conduct a “comprehensive investigation” into the school’s purchase and proposed sale of shuttered casino.

The Press of Atlantic City reports the Stockton University Board of Trustees approved a contract Wednesday of up to $350,000 with Gibbons P.C. (Associated Press)

Assistant Attorney General Jean Reilly arguing that the pension reform law of 2011 — known as Chapter 78 — is superseded by three clauses in the state Constitution.

“Plaintiffs’ contention that Chapter 78 creates a legally binding right to an annual appropriation of a prescribed amount construes the statute in a way that runs afoul of the appropriations, veto and debt limitations clauses,” Reilly said. (Aron/NJTV)

As thorny as pension funding is, the compromise he forged four years ago would likely be a feather in Gov. Chris Christie’s cap should he become an official presidential candidate. But Bridgegate trials are looming. And his popularity is declining in an increasingly crowded field of Republican contenders. NJTV News Correspondent David Cruz was in Manchester, New Hampshire to get the lay of the land in the nation’s first primary state.

A full helping of legislative hearings are slated for today, March 7, in Trenton. The state’s proposed $225 settlement with Exxon Mobil — which is nearing the end of its 60 day public comment period — is the main highlight. Here’s a quick look at what else is going on. (Brush/PolitickerNJ)

Getting lurid in West New York

The unmistakable political fingerprints of operative Pablo Fonseca appeared this week on a mailer (above) targeting Commissioner Count Wiley and his allies as the May 12th election nears in West New York.

It’s getting ugly up in North Bergen.

Less than a day after alleging a convicted former township clerk was running the mayoral hopeful’s campaign for mayor, incumbent Nick Sacco’s camp slammed Larry Wainstein and his team for employing a street operative arrested yesterday for aggravated assault on a school security guard at North Bergen High School. (Brush/PolitickerNJ)

Former Jersey City Police Chief Robert Cowan filed a lawsuit this week against Jersey City Mayor Steven Fulop and Public Safety Director James Shea and others alleging that city officials asked him to “cover up” several activities, including driving under the influence by superior officers in the police department and an out-of-state DUI involving a high ranking member of the Fulop Administration.

“I’m using a number of consultants, and he’s one that I consulted,” Bramnick said of the Christie confidante dismissed by the governor after Bridgegate. “The guy is not a criminal. The bottom line is he hasn’t been charged with anything and he’s very good at what he does. He doesn’t server a death sentence. (Pizarro/PolitickerNJ)

A weakened Newark City Council President Mildred Crump hung on to her throne today while the council voted to make Amador the vice president of the governing body, a move Crump initially resisted as she insisted on lone dominance. (Pizarro/PolitickerNJ)

Titled “The Shady Bunch,” and maybe we’re dating ourselves here to act like the blogosphere knows about that 20th Century offering called “The Brady Bunch,” the ad dives into Wainstein’s alleged circle of allegedly sketchy advisers and supporters. 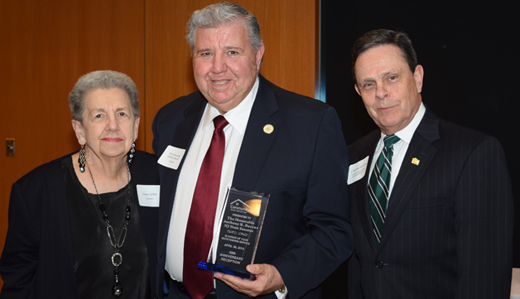