So this is where it started, at sedate events like this under wooden colonial crossbeams – for Gov. Chris Christie – who once occupied a chair on the Morris County Freeholder Board before losing reelection, only to later improbably vault to political super-stardom and Bridgegate aftershock, a stunning arc far removed from these one-term freeholders staring at a countywide landscape and aiming at another term. (Pizarro/PolitickerNJ)

NORTH BERGEN — To get a sense of how diabolically vicious mayoral races can get in this small Hudson County borough, one has only to listen to the town’s current executive, Nick Sacco, explain how he’s decided to shut down the schools next Tuesday in order to keep the politics out of the classrooms on election day. “We just can’t subject our student body to it, if this is going to be as nasty as it is,” Sacco says.

Yes, in North Bergen, even the kids become bargaining chips in the fierce political standoffs that take place across street corners and doorsteps all over town. This year, Sacco himself is one party in that battle, a 25 year incumbent looking to fend off a challenge by local businessman and notorious establishment agitator Larry Wainstein. The two camps have lobbed accusation after accusation at one another these last few weeks, from questions of residency, to voter fraud, to general allegations of impropriety and misconduct. Inevitably, the race has gotten ugly. (Brush/PolitickerNJ)

Scutari goes to war against (or for?) those with ‘acting’ in front of their titles

Senator Nicholas P. Scutari (D-22) wants to limit the term a person may serve in an acting capacity for positions that require the Governor’s nomination and consent of the Senate for appointment to six months. (Pizarro/PolitickerNJ)

Scutari goes to war against (or for?) those with ‘acting’ in front of their titles | New Jersey News, Politics, Opinion, and Analysis

TRENTON — A Democratic state senator — who was integral in bringing the first of their kind to fruition under the state’s last governor — wants to make New Jersey’s tax incentive programs for successful businesses more accountable under the current Republican administration.

State Senator Ray Lesniak (D-20), at a press conference in the statehouse today, announced the introduction of legislation that would reform the way the state’s Economic Development Authority handles business tax incentive programs to make them more transparent. The bill comes at a time when an uptick in corporate subsidies under Christie’s administration has drawn the scrutiny of Democrats and liberal advocacy groups, many of whom see the Republican mixing politics and policy ahead of a likely 2016 presidential run. (Brush/PolitickerNJ)

“Leafy” might be the best adjective for Morris County, that northern New Jersey haven of mountain and swamp land with deer-strewn spaces that put its imprimatur on everyone from George Washington to Chris Christie to Jay Webber, an abode that now finds itself rent asunder once again – not by the muskets of war or the caustic countywide declarations of then-Freeholder Christie – but by a particularly brutal Republican Primary. (Pizarro/PolitickerNJ)

HACKENSACK – State Senate Majority Leader Loretta Weinberg (D-37) smiled as an assembly of New Jersey power players filed into the Stony Hill Inn in Hackensack on Wednesday night for a belated 80th birthday celebration. But the event was also held in the hope that it’s right on time for another idea: getting more women inside these types of power rooms.

“I am not about to leave the managing of my legacy to a group of men,” said Weinberg, 80, considered by some to be the conscience of the Legislature, about the creation of a Loretta Weinberg Legacy Fund to be used to foment greater female participation in New Jersey politics. “What I want this money to be used for is to bring whole generations of troublemakers into this.” (Bonamo/PolitickerNJ)

Days away from facing voters in the May 12 municipal election, West New York Mayor Felix Roque addressed the issues that have arisen in a classically contentious Hudson County political campaign. Roque talked about a lifetime trip that has taken him from his boyhood home in Cuba to a career as a doctor and a second career in political life. (Bonamo/PolitickerNJ)

A mother of twins was applying for public assistance in Passaic County, N.J., when she made the seemingly uncontroversial claim that one man was responsible for her progeny.

The truth, it turns out, was not so simple.

In an unusual ruling in State Superior Court in Passaic County, Judge Sohail Mohammed found that egg and sperm had colluded to create a medical oddity, according to a report in The New Jersey Law Journal on Thursday. The man who the woman said was the father of her twins was deemed responsible for only one. (Mueller/The New York Times)

Some may say that New Jersey Governor Chris Christie has been vindicated in the so-called Bridgegate scandal with last week’s indictments of several former staffers. After all, Christie himself was not named.

New Jersey Gov. Chris Christie has ducked major GOP gatherings in Iowa and South Carolina and appears to be focusing his potential presidential campaign on New Hampshire instead, a move that analysts said could make or break his White House dreams.

The Port Authority will “step up to the plate” to help design, fund and build new train tunnels under the Hudson River, its chairman said Thursday, a sudden change in policy for the bi-state agency, which has not included funding for the massive project in its 10-year, $25 billion capital plan.

The shift by the Port Authority comes as Amtrak continues to work on the tunnel project, known as Gateway. Already, the federally chartered company has built the foundation for a new tunnel between 10th and 11th avenues on the West Side of Manhattan at a cost of $185 million. Now, phase two, to extend that effort west of 11th Avenue, is under way, said Amtrak board Chairman Anthony Coscia on Thursday. (Maag/The Record)

WASHINGTON — A federal appeals court ruled on Thursday that the National Security Agency’s collection of millions of Americans’ phone records violates the Patriot Act. It is the first appellate ruling to weigh in on the surveillance program that has divided Congress and ignited a national debate over the proper scope of the government’s spy powers. (Nakashima/Washington Post)

Gov. Chris Christie’s latest visit to the Granite State started at the Farnum Center, a drug treatment facility in Manchester. Drug courts and prison alternatives were discussed at a roundtable where after he met with the press.

“The drug war is 30+ years old now. Well intentioned at the start, but completely, in my view, a failure and ineffective,” Christie said. (Cruz/NJTV)

The Governor’s nominations are subject to the advice and consent of the State Senate. Governor Chris Christie also filed the following direct appointments with the Secretary of State’s Office. (Pizarro/PolitickerNJ)

Chief Justice Stuart Rabner today announced that Superior Court Judge Stuart A. Minkowitz will lead the Morris/Sussex Vicinage, effective May 28. He will succeed Assignment Judge Thomas L. Weisenbeck, who is retiring after 10 years on the bench, four as assignment judge. (Pizarro/PolitickerNJ)

Smith stressed the importance of independent thinkers who can work with others. He said Jersey City businessman Alston reached out to him for the support and he complied. (Pizarro/PolitickerNJ)

Governor Chris Christie today announced action that has been taken on the following legislation: (PolitickerNJ Staff)

Scapicchio remembers Christie on the 1994 campaign trail in Morris

In latest sign that O’Malley is running for president, he hires a national political director

As he prepares to launch a White House bid in the coming weeks, former Maryland governor Martin O’Malley has brought on a former aide to President Obama to serve as his national political director, O’Malley aides said. (Wagner/The Washington Post)

Insurance goliath John Graham and his son, Ryan are no stranger to local politics.  In March, the elder Graham was honored and inducted into the 2015 Essex County Democratic Committee Hall of Fame.  In addition to being heavily involved in Essex County politics, Graham has also previously served as national finance co-chair for Hillary Clinton when she ran for president in 2008, and also as state director for John Kerry, when he ran for president. (Cahil/Parsippany Focus)

KEENE, New Hampshire – At a country club here in the southern part of this crucial, early voting state, New Jersey Gov. Chris Christie broke from some of his potential 2016 Republican presidential rivals, saying he believes in climate change and that humans have something to do with it. (Frumin/MSNBC)

Is ISIS winning the Internet war with ‘Fancy Memes’?

No matter how many zillions of munitions we drop or drone-fire onto the territory controlled by ISIS, we’re woefully far behind in the propaganda war—and nowhere is this more evident than the increasing Meme Gap. But internet legend turned senator Cory Booker wants to turn the tide. (Biddle/Gawker) 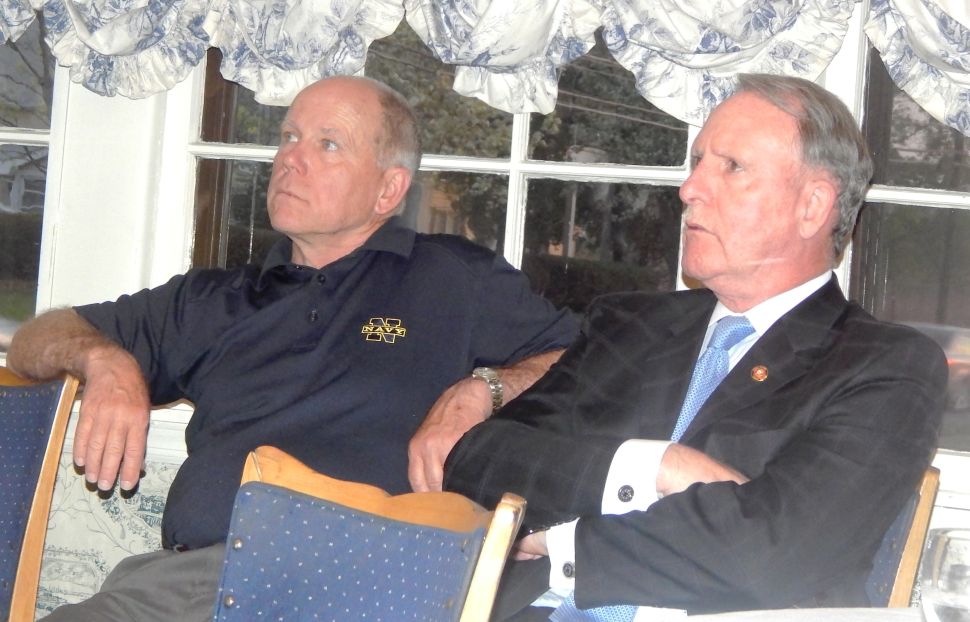