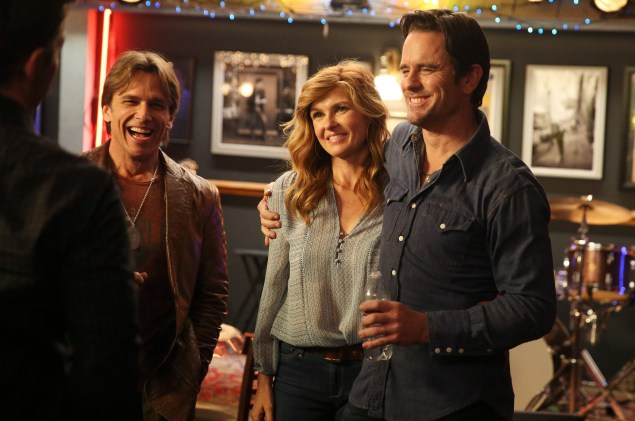 Let’s go through our storylines, shall we–

Will and his dad – Will’s story has always held real stakes. I’ve mentioned this before but I think Chris Carmack does a fantastic job of showing Will’s internal struggle. I like that his father showing up puts his relationship with Kevin into question. Will cannot reconcile within himself that wanting love from his father means taking steps back in terms of wanting love from a partner. This is not reinventing the wheel in terms of story but it’s nicely played and feels true to life. I wish Will could get out of his own way and let himself be happy, or be honest with his father, or accept the love that Kevin offers him – but these are complicated issues for a gay cowboy and it’s never going to be as easy for him as we wish it could. Next week the tabloid story breaks. I hope when it does that Will chooses the right support system to get him through it.

Teddy’s scandal – Teddy gets out of shit so easily. It’s like every week the writers say, “have we had enough of Teddy? Should we kill him off or throw him in jail or something?” Then they’re like, “Nah. We like him. Keep him around.” How many hail marys has Teddy been handed like a soft pass? Many. The Mayor’s got friends all over town and now that they now how much Lamar Wyatt venom runs through his veins, they’re gonna use it. PS – does anyone know what Teddy did for a living before he was Mayor? Was his job description literally just “Mr. Rayna James”? How does that line of work qualify one to be mayor in the first place? I digress. The point is that Teddy is wearing a wire and in doing so, may implicate Tandy in a scandal. This is all kinds of wrong because not only are his lil girls spending the week with her in San Francisco, but she’s made a whole new life for herself on the non-profit scene! Poor Tandy. Teddy just can not stop stepping in shit. Personally, my favorite version of Teddy is as a good guy. The Teddy who didn’t realize Natasha was a call girl, and even when he did, keep seeing her because he was lonely, not because he was a sex deviant. The Teddy who takes Daphne out for ice cream. The Teddy who feels like a boring loser arounf all these musicians. Bad is just not his color. Teddy wants to be a square, it’s how he feels most comfortable. Every time he’s tried to threaten someone, it just looked like bad acting. (Which is actually either good acting on Eric Close’s part or more likely, good luck on the producer’s.)

Layla and Jeff – watching this Layla / Jeff relationship play itself out is like watching a slug slowly die and squirm as salt is poured over its body one flake at a time. I am the first to admit that Layla has never been my favorite character, but hasn’t she been tortured enough already? Did she have to legally sign her entire life & career over to Jeff after we watched him (not so subtly) manipulate her all episode? Jeff’s behavior is that of an adult male mean girl. He’s using Layla as a pawn to get back at Jade for rejecting him over ten years ago and he’s doing it using TWITTER! If Layla wasn’t sad collateral damage in the process, it would be hilarious watching Jeff try to wield what little power he has left in the world. That power, which use to be wide spread, has been boiled down to conning an underage reality star into an S&M relationship. Because yes, despite racking up a collection of bad decisions to rival someone twice her age, I believe that Layla is still not old enough to drink.

Scarlett and Gunnar (and Caleb and Kiley) – Every time Scunnar sings it’s a dream and their performance at the Bluebird was no exception. These two protest a little too much that the only thing between them is music ie, the way Scarlett was shaking those hips on stage told a wholly different story and everyone could see it. But The Exes are right to try and keep it professional. Classic acting rules say that if you want to keep it hot on stage, keep it chaste off. Scarlett should marry Caleb (a la Rayna and Teddy obvs), have a couple kids, divorce him in fifteen years and then she and Gunnar can get back together in the Nashville reboot coming to Hulamazon in 2030.

Kiley is a master manipulator and Jeff Fordham could take a trick or two out of her handbook. Inspired by last week’s “your brother raped me confession” Gunnar forgives Kiley for lying about Micah’s parentage, dropping him on his doorstep and promptly disappearing. Gunnar confesses that even if Kiley ruined his opinion of Jason, at least she’s restored her own place in his heart. Based on the self-satisfied look on her face during that convo, I think we can say for sure that the whole rape story is a big load of hooey. Kiley slow-walks over to Gunnar, gives him a boner inducing kiss and excuses herself to a bedroom in his house to which he’s not invited. Manipulation station. Get this bitch outta Nashville.

Juliette & co – Finally the people in her life have realized that J is suffering from postpartum depression. She refuses to believe it, but at least now they’ll stop giving her shit for not wanting to stay home with the babe. I dunno what the next step is, but hopefully it involves getting J some help. Sidenote: Hayden P. has never been better.

Rayna and Deacon and Beverly – Someone leaked to the press that Deacon needs a new liver and needs one bad. You’d think this would start a rally cry from the Deacon Clayborne fanclub for its members to get tested for a match. Instead, the only change is that radio personalities treat him like he’s already dead. It seemed overly harsh to me that people would be performing tributes and eulogies while the man is still breathing but hey, what do I know? Finally, Bev shows up at the end of the episode to offer her bro a liver. Everyone is relieved but did I detect a hint of jealousy from Ray that it would be Beverly and not herself who’s gonna be Deacon’s savior?

I say that if Nashville is getting canceled (and please god, no!) they should throw their cards down and kill Deacon. It’ll be sad enough anyway. We might as well mourn properly.

Here’s hoping next week’s not the last! 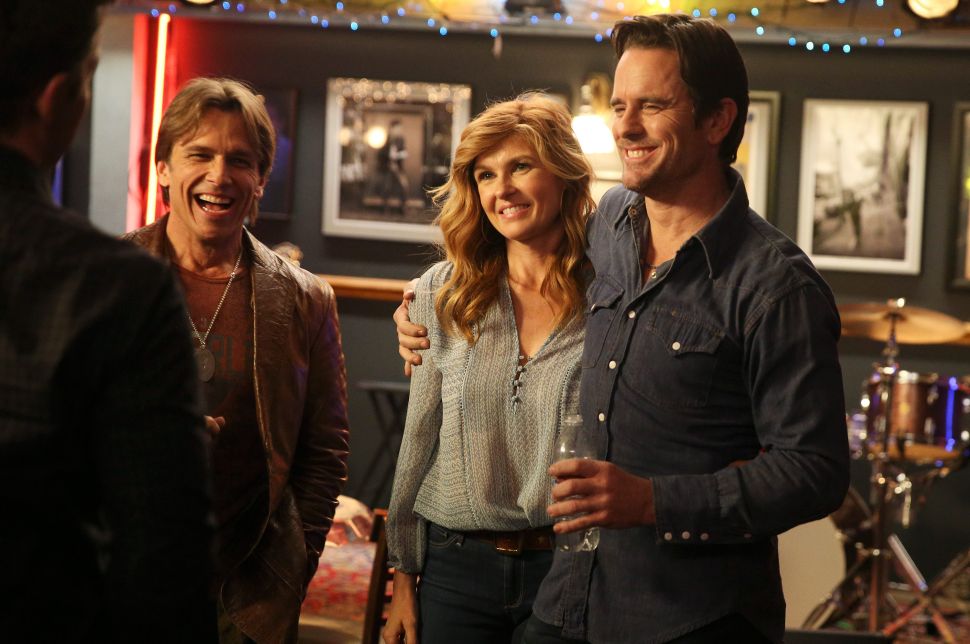