Senator Dick Durbin of Illinois is one of the more thoughtful Senate Democrats on questions of foreign policy. In a recent meeting with the Observer, Mr. Durbin, who is also one of President Obama’s strongest congressional allies and serves at Senate Minority Whip, concisely explained why he was reluctant to commit U.S. ground troops to fight ISIS. “I do not want to see the United States invading another Muslim country. I don’t believe that is ultimately going to stabilize the Middle East,” Senator Durbin said emphatically. “The Bush, Cheney, Rumsfeld formula ‘we’re going in to Iraq to show you don’t mess around with us’…didn’t prove their point very effectively.” Mr. Durbin makes a pretty convincing argument. Given the violence and disorder resulting from the U.S. invasion of Iraq, repeating that scenario elsewhere in the Muslim world should be avoided.

The challenge raised by Mr. Durbin’s is that if an invasion is not on the table, the policy options open to the U.S.—no-fly zones, delivering humanitarian assistance, negotiations or sanctions—have not proved particularly fruitful in recent years. Domestically this creates a political dynamic where the Republican Party, Rand Paul notwithstanding, still dominated by neoconservatives on foreign policy questions, present themselves as aggressive and solution oriented while Democrats seem to be simply negative and lacking confidence in the U.S. This could explain why Hillary Clinton has sounded so much like a neoconservative Republican since leaving the Obama administration and planning her own presidential campaign.

The Democrats, particularly the Obama administration, are increasingly trapped between their view that the interventionist approach of the previous administration was disastrous and the Washington consensus that the U.S. can, and should, try to solve every major geopolitical problem in the world. When I asked Senator Durbin about this perception, he responded, “You’re right. The Western point of view is that there’s a solution to every problem. I don’t think other parts of the world share that; and some of them have seen these problems for centuries.”

This leaves the Obama administration a very narrow bandwidth in which to craft foreign policy. The administration continues to eschew aggressive military solutions but also no longer has the political strength to build a new consensus around a less internationalist approach to foreign policy. More than six years after George W. Bush left the White House, Republican ideas are the driving American foreign policy. For example the perception of Russia as an increasingly dangerous regional bully, which Republican hawks like John McCain articulated when Vladimir Putin’s army first invaded Ukraine, is now the consensus view in Washington.

It remains true that President Obama assumed office during a time when the American people’s commitment to overseas involvement was ebbing, and that the President’s primal foreign policy mistake was to assume that was a new consensus rather than part of an ongoing cycle. That mistake has contributed to the Democrats current foreign policy conundrum as reflected by Mr. Durbin’s analysis. Hillary Clinton’s position as the all but uncontested frontrunner for the Democratic presidential nomination means that it will likely not be a campaign issue, but it is apparent that, if elected, President Clinton can not expect to pursue a neoconservative foreign policy without encountering resistance from her own party and that the Democrats still cannot agree upon a broad post-Bush foreign policy to call their own. 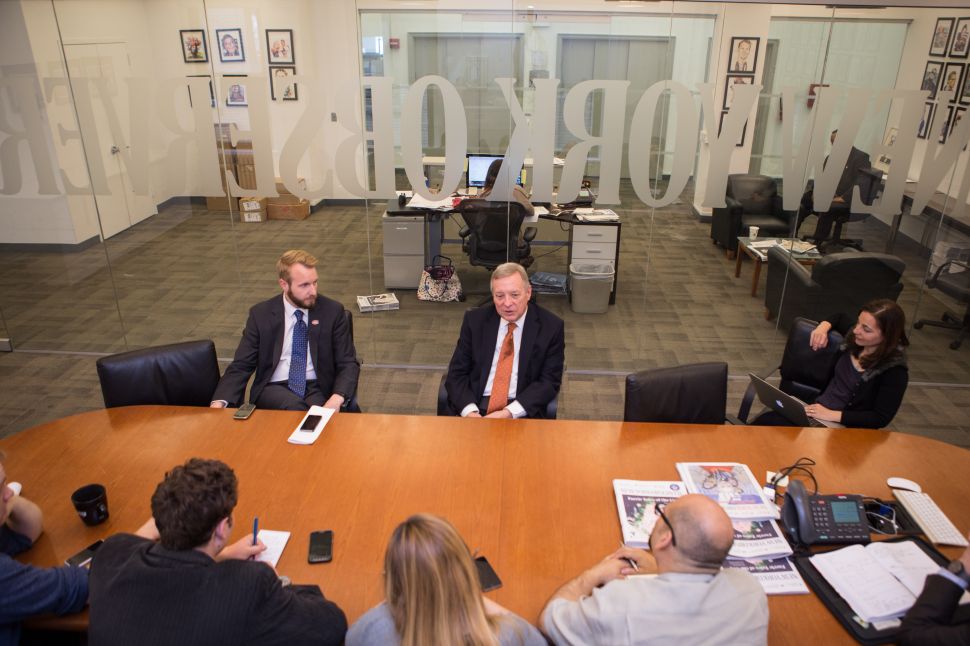