Last Friday my phone was ringing with word that a piece I had written for The Hill in 2012 was discussed in the first Clinton emails that were publicly released. In that piece I harshly criticized the Republican-dominated House Oversight and Reform Committee and its then-chairman, GOP Congressman Darrel Issa of California, for abusing the institution of Congress to wage a taxpayer-financed partisan witch hunt against Secretary of State Hillary Clinton over the tragedy at Benghazi.

The GOP attacks against Hillary Clinton over Benghazi, which began in 2012 and have continued to this day, are reminiscent of the unsavory tactics of Richard Milhous Nixon, a pioneer in the dark art of abusing Congressional power to attack and destroy political opponents. Nixon, who ultimately came to be known as “Tricky Dick”, first reached national prominence through his role on the House Un-American Activities Committee in the 1940’s.

Nixon and that committee abused hearings, investigations, and subpoenas to wage wars of character assassination and personal destruction against their enemies lists including liberals who were accused of being communists, Hollywood stars who were blacklisted, and early supporters of civil rights who were tarred and feathered as not being true Americans.

Why do Republicans resort to the tactics of Richard Nixon in their vendettas against Hillary Clinton today?

Republicans cannot compete against Hillary in the contest of experience. The GOP field for 2016 is composed of a conga line that will ultimately reach 15 to 20 politicians

who look small compared to the former first lady who was at the center of the most admired modern presidency in decades, was a United States Senator widely respected by her colleagues and often praised by Republicans including John McCain, and was a Secretary of State who has long been one of the most admired and respected women in the world.

Republicans cannot compete against Hillary in the battle of ideas. They dread the idea of the first woman presidential nominee in any major party winning a huge majority of women voters who know she will champion causes such as pay equity for women and higher wages for all workers with a passion and conviction that will lift the lives of working women and men more than any GOP candidate can dare to dream of.

Republicans cannot compete against Hillary in the battle for history. They dread the idea of a Democrat who is the first woman president leading a presidency that will come to be as fondly remembered as the two terms of the Bill Clinton presidency, which could bring a major political realignment that could last a decade or longer.

Unable to compete on the terrains of experience, ideas or history, the Republicans are reduced to reviving the ghost of Richard Nixon and his partisan politics of personal destruction and abuse of power that represents the brand of politics that Americans have come to detest—which is why it will not work in 2016.

When Democrats took control of the House in 2006 and Democratic Rep. Nancy Pelosi (D-Calif.) became speaker, she treated the institutions of the House of Representatives with honor and respect.

To her great historical credit, Ms. Pelosi as speaker move to pass major legislation to create jobs, improve healthcare, protect the environment and make life better for Americans. Ms. Pelosi and the Democrats never abused their power in Congress the way Republicans did when they revived the ghost of Nixon and began legislatively stalking Hillary Clinton in 2012.

Nixon’s ghost first resurfaced in the 1990’s with the non-stop partisan vendetta against Bill and Hillary Clinton waged by another congressional committee led by Republicans, which began stalking the Clintons almost from the moment Bill Clinton was inaugurated as president in 1993.They raised it to new heights with their obsession to destroy Bill Clinton.

The Republican Congressional inquisitions that began during the first term of the Clinton presidency were designed to defeat Bill Clinton in his reelection campaign, but even when they failed and he was reelected in 1996 by a large margin, Nixon’s ghost continued to corrupt the Republican soul.

While Bill Clinton was creating record numbers of new jobs, balancing the budget and creating a historic budget surplus, Republicans revived the ghost of Nixon yet again after his reelection in 1996. They passed articles of impeachment against President Clinton in the House, put him on trial in the Senate, and attempted to remove him from office in apartisan coup d’etat.

The Clintons vanquished Nixon’s ghost again. The articles of impeachment were defeated in the Senate, President Clinton’s approval rose to stratospheric heights, his presidency became known as a modern golden age of job creation and American prosperity and Bill Clinton—with Hillary as his full partner in his presidency —remains America’s most popular living former president, having led the most fondly remembered presidency of our times.

And yet, like the cancer John Dean warned Nixon would destroy his presidency, the ghost of Nixon has returned yet again and metastasized into the stalking of Hillary Clinton with the House Benghazi Committee, which seeks to preemptively impeach her before she is even elected as America’s first woman president.

I first criticized the partisan Benghazi investigation by House Republicans in October 2012, weeks before the presidential election, in my piece that was referenced in the Clinton emails. At that time the GOP plan in the latest incarnation of Nixon’s ghost was to use a taxpayer financed Congressional inquisition to smear Hillary Clinton in order to defeat President Obama and elect Republican nominee Mitt Romney.

Nixon’s ghost was foiled again. President Obama was reelected in a resounding victory and Hillary Clinton became the frontrunner for the Democratic nomination in 2016. But like a bad date that never seems to end Nixon’s ghost appeared once more, even after the ill-fated Benghazi inquisition that failed to smear Hillary Clinton or deny Obama his reelection to a second term.

Nixon’s ghost was thwarted in 2013, but the Republican inquisition continued in 2014.

If Republicans riding the ghost of Nixon get their way, these taxpayer-subsidized inquisitions will continue to stalk Hillary Clinton through Election Day 2016 for a time period that could ultimately be longer than all of the years of American participation in the Second World War.

The mainstream media should report the story of this abuse and not merely treat these abuses of power as sporting events as each charge in the stalking of Hillary Clinton is first reported, and then retracted or debunked, followed by a new charge, that is equally disproven.

Nixon’s ghost should be laid to rest. These partisan investigative committees in Congress should be abolished as an intolerable abuse of power and breach of trust, as the House un-American Activities Committee was finally abolished and as Richard Nixon was ultimately forced to resign before he would have been impeached for high crimes and misdemeanors.

Any congressional committee pursuing investigations of wrongdoing should be composed of an equal number of Democrats and Republicans, with a chairmanship that rotates between the ranking Republican and ranking Democrat every year, to prevent these abuses from ever occurring again, through one-party inquisitions such as the stalking of Hillary Clinton by Republicans in a Congress that is now disapproved by nearly three-fourths of the nation in the latest summary of polling from Real Clear Politics.

What you read here is a manifesto for mobilization of Democrats, liberals, moderates, women and swing voters with a social conscience to rise against these abuses of power.

America witnessed what happened when Richard Nixon rode his abuses to the power of the presidency. Americans must not allow those who ride the ghost of Nixon today to seize the power of all three branches of government tomorrow.

It is time for America to say farewell to Nixon’s ghost today, tomorrow and forever. 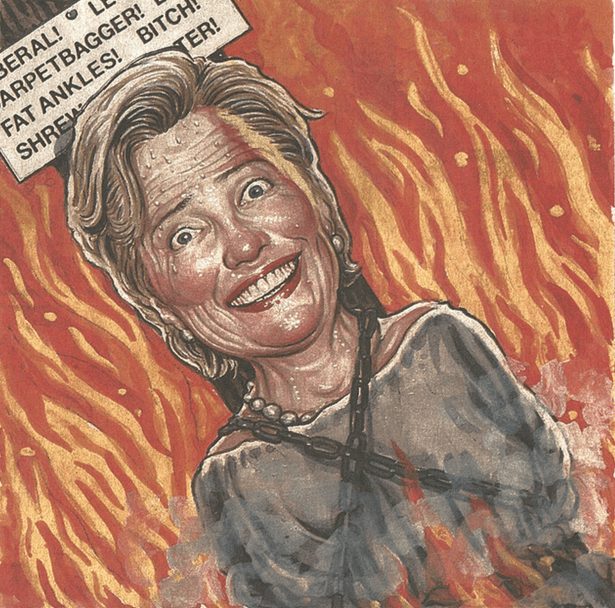