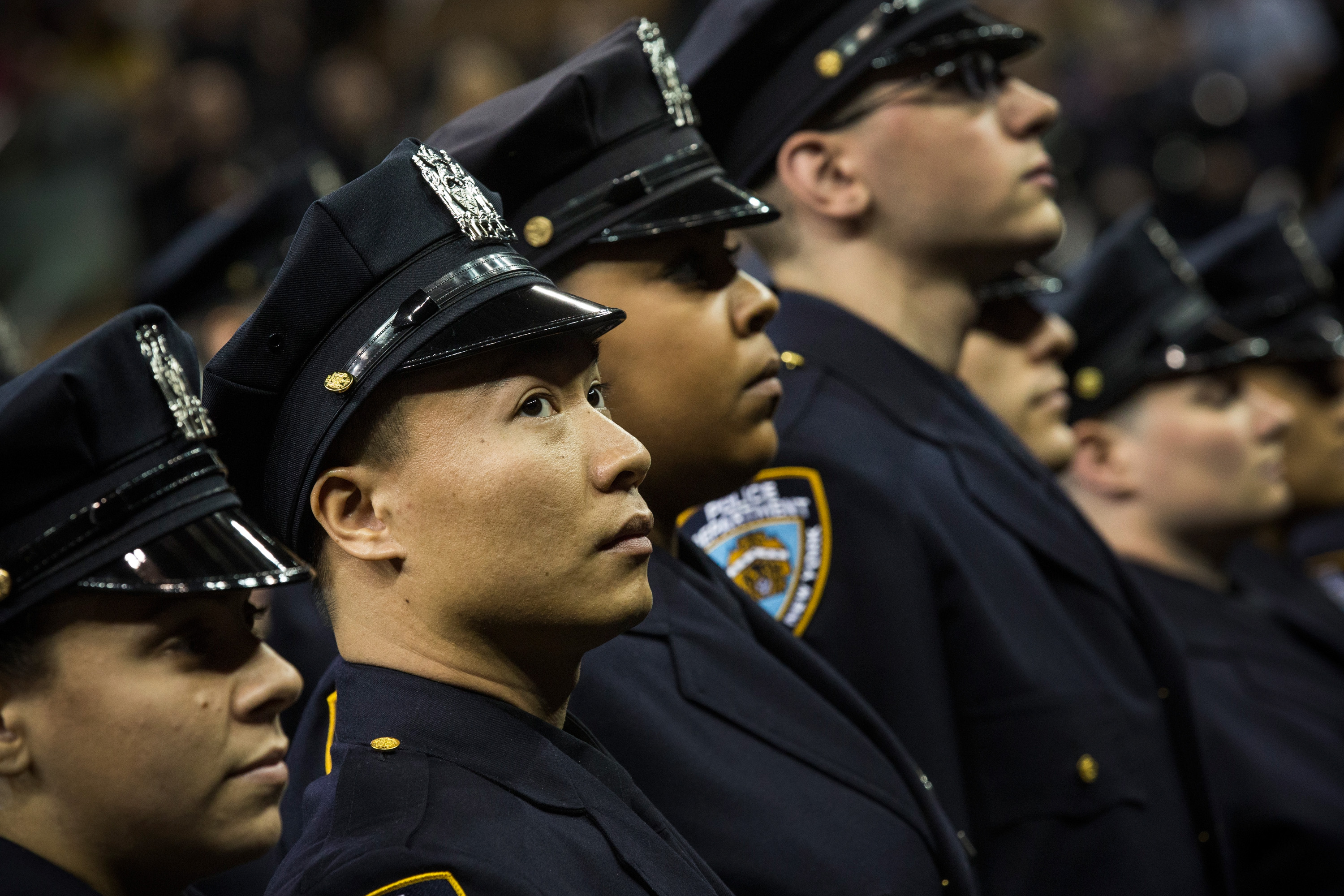 Members of a 2014 class of the New York Police Department. (Photo by Andrew Burton/Getty Images)

Despite a request from the City Council for the second year in a row, Mayor Bill de Blasio did not include funding for 1,000 new cops—or any new police officers—in his proposed executive budget today.

The plan to staff up is not part of the $78.3 billion budget proposal for fiscal year 2016 that Mr. de Blasio is presenting to the press this afternoon in City Hall’s blue room. It would cost $68.7 million in the next fiscal year, and closer to $100 million a year in the out-years, and is backed by City Council Speaker Melissa Mark-Viverito.

“It’s very disconcerting to us. We believe it’s important to this Council. We will continue to push,” City Council Finance Chairwoman Julissa Ferreras told reporters outside City Hall this afternoon. “This Council feels that we have room in this budget to do this this fiscal year. And we understand the mayor doesn’t agree, but we don’t agree with him.”

Mr. de Blasio has not yet taken questions on his budget, but several Council member who were briefed by the mayor on the budget today told reporters that Mr. de Blasio said that the reduction in stops made of people on city streets meant more officers were free for policing.

The City Council has repeatedly argued that hiring more cops would reduce the department’s hefty budget for overtime—the NYDP is expected to spend $672 million on overtime this year—by $50 million.

Councilman Daniel Garodnick said he believed Mr. de Blasio’s rebuttal, and the idea that the drop in stops required further examination of staffing figures, was “worth considering.” But he had hope the mayor’s position would shift during the behind-the-scenes negotiations that will lead up to a budget deal in June.

Councilman David Greenfield said the additional officers were a quality of life issue for middle class New Yorkers who find that when they call police for an issue like a car accident, they may wait up to two hours.

“The reason for that is there aren’t enough cops,” Mr. Greenfield said. “The issue of police officers is a solid middle class issue that a lot of middle class New Yorkers are very concerned about, and I would tie it to the quality of life issue.”

The issue of hiring more cops has unified many—though not all—in the council. For moderate Democrats in outerboroughs and the body’s few Republicans, hiring more police is always a win with constituents. In the progressive wing of the Council, members have argued more cops will help ease the tension between police officers and the community by putting more cops on the beat, getting to know neighborhoods. (Whether hiring cops will have that outcome is up for debate.)

The Council does have someone in the administration on their side—Police Commissioner Bill Bratton, who has said he too believes the department needs more officers.

“I think it does,” Mr. Garodnick told the Observer. “I think it will be surprising if we don’t see progress in this conversation in the coming weeks.”

The executive budget will be followed by yet another round of City Council budget hearings, while a budget negotiating team works toward a deal behind closed doors ahead of the June 30 deadline.