“Katie Mocco is a young attorney, a world-class, Olympic-level judo athlete. She volunteered with my North Bergen Concerned Citizens Group,” said former North Bergen mayoral candidate Larry Wainstein in response to comments made by Sacco about Mocco to PolitickerNJ. “She has helped special-needs children and other groups of people. She’s bright. She’s energetic. Why Nick Sacco is trying to dirty her up is beyond me. It’s shameful.”

During the impassioned North Bergen mayoral campaign, assertions were made that the Wainstein campaign had been subsumed by former township clerk Joe Mocco, who was convicted on racketeering charges in the late 1980s.

Wainstein rejected any inference made by Sacco that either he or Katie Mocco were corrupt as a result of any direct or indirect association with the former township clerk.

“The things that happened between Nick Sacco and Joe Mocco happened over 30 years ago. I wasn’t involved. I was 13 years old,” said Wainstein, 43, a wealthy local businessman who plans to remain involved in North Bergen politics. “Corruption in North Bergen happens because Mayor Nick Sacco enables it. It starts at the top.” 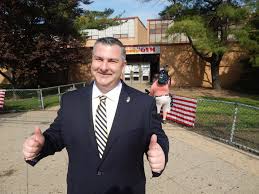