Police Commissioner Bill Bratton today announced the death of Brian Moore, a 25-year-old police officer who was shot in the face in Queens this weekend.

Moore was shot Saturday evening after he and another officer, both in plain clothes, approached Demetrius Blackwell, 35, after seeing him tug at his waistband, according to the NYPD. Mr. Blackwell, who has been arrested, responded in part by opening fire.

Mr. Bratton spoke to the press today outside Jamaica Hospital, where Moore had been placed in a medically-induced coma. He praised the young officer, who came from a police family, as an “extraordinary young man.

“I’ve only come to know him in death,” Mr. Bratton said.

Moore’s death is the third line-of-duty slaying the NYPD has seen in the last six months. Officers Rafael Ramos and Wenjian Liu were gunned down in December by an assassin who wrote on social media he hoped to take revenge for the deaths of unarmed black man like Eric Garner and Michael Brown at the hands of police.

Mr. Bratton said Moore was among 55,000 police officers “every day who are in the streets of New York, who work very hard to keep these streets safe.”

Appearing with Mr. Bratton was Patrolman’s Benevolent Association President Patrick Lynch, who in the wake of the December shooting had harshly criticized Mayor Bill de Blasio for showing sympathy to protesters and calling for NYPD reform, and who turned his back to the mayor at a hospital the night Ramos and Liu died. That kind of rhetoric has been absent in the wake of Moore’s shooting.

Mr. Lynch said the PBA was about the “take part in a sad, sad tradition” of mourning a fallen cop.

“We’re going to lift up Brian’s family for devastation that they’ll never pass, that will never go away. There’s no closure for a New York City police officer’s family in death,” Mr. Lynch said.

He said officers, like Moore’s family, would also be plunged into grief—but would then hit the streets to do their jobs.

“While they’re squaring their shoulders, the public should thank them and pat them on that same shoulder and say ‘thank you for what you do every day,'” Mr. Lynch said.

Chief of Department James O’Neill said he had worked with Moore’s father in the warrants squad during the 1990s.

He called the officer a brave man who “took an oath 4-and-a-half years ago to keep the people of this city safe, and that’s what he was doing when he was shot and brutally murdered.”

Mr. Bratton took no questions this afternoon, but is expected to appear shortly with Mayor Bill de Blasio at One Police Plaza to address the press further on Moore’s death. 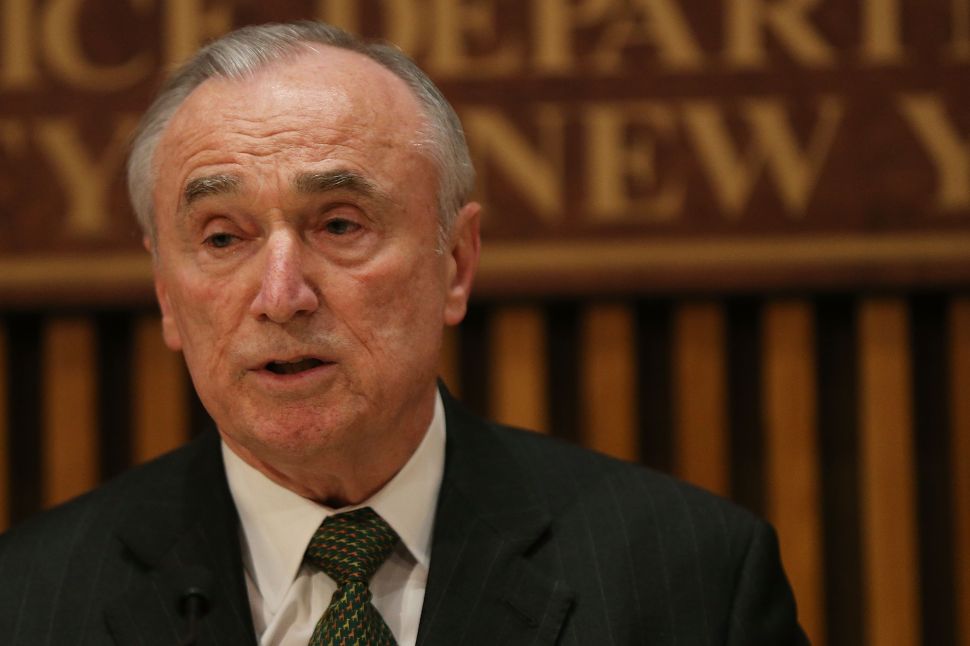