A nuclear-armed Tehran presents an urgent threat to freedom. Opposing the Iran deal are two unlikely allies, Saudi Arabia and Israel. And it’s just the latest sign of a thaw in a relationship that proves the wisdom of the old Sanskrit proverb, “the enemy of my enemy is my friend.”

Saudi Arabia officially dropped the Arab boycott against Israel in 2005 as a condition of joining the World Trade Organization. Last July, Prince Turki Al Faisal, Saudi Ambassador to US from 2005-2006, published an op-ed in the Israeli newspaper Haaretz. It did not mention the Palestinian people’s “right of return” to their former homes in current Israel, a key demand of Palestinian activists for decades. Even more surprising, Faisal’s article did affirm the importance of the Holocaust and the Jewish people’s historic claim to Jerusalem.

Prince Faisal wrote “Imagine if I could get on a plane in Riyadh, fly directly to Jerusalem, get on a bus or taxi, go to the Dome of the Rock Mosque or the Al-Aqsa Mosque, perform the Friday prayers, and then visit the Western Wall and the Church of the Holy Sepulchre… If, the next day, I could visit the tomb of Abraham in Al-Khalil, Hebron, and the tombs of the other prophets, peace be upon them all. I could then drive to, and visit Bethlehem, the site of the Nativity. I could go on to visit the Yad Vashem Holocaust center and museum as I visited the Holocaust Museum in Washington, when I was ambassador there.”

Ironically, as the State Department attempts to lift the economic boycott against Iran, President Obama and his supporters are pushing a new boycott — against Israel. From the White House to Congress and from the New York City Council to America’s college campuses, Democrats are boycotting opponents of Obama’s pending nuclear deal with Iran. While some Democrats applaud lifting economic sanctions against Tehran, others want to slap such restrictions on Israel.

When Israeli Prime Minister Benjamin Netanyahu addressed a joint session of Congress on the dangers of a nuclear Iran; 58 Democratic members of Congress boycotted his speech. Vice President Joe Biden, who serves as the president of the Senate, also skipped Mr. Netanyahu’s appearance. As for Mr. Obama, he refused to meet in person with Mr. Netanyahu and virtually boasted that he did not even watch the remarks by the leader of America’s closest ally in the Middle East.

Last April 20th, U.S. Senator Ted Cruz (R – Texas) discussed the dangers of the Iran deal with a small group of Jewish business leaders at a private dinner, security briefing, and discussion that I organized. This event was held in the Manhattan home of two gay entrepreneurs who dared to meet with Mr. Cruz — as if America were a free country, and as if dialogue with people of opposing viewpoints fostered consensus and mutual understanding. Once this gathering became public, the gay community and its caucus in the New York City Council led an 11,000-person-strong economic boycott against the hosts of this gathering and the hotel that they own and manage.

Media reports indicate that gay college students are some of the loudest voices screaming for boycotts, divestment, and sanctions against Israel. All 58 Members who boycotted Mr. Netanyahu’s speech received top scores from the Human Rights Campaign for their support of gay-rights issues.

On May 5, Mr. Cruz told journalists that Democrats are terrified to vote on legislation that would require Iran to recognize Israel’s rights to exist as a Jewish state. Rather than go on record and expose the Democrat senators’ fundamental opposition to Israel, they are blocking every amendment on the Iran deal, in hopes that this tough vote does not come up.

Even as Democrats and their allies move to distance themselves from Israel, GCC countries, including their business leaders, journalists and politicians, are moving closer to Israel. “In an accident of fate,” writes UAE industrialist Khalaf Habtoor, “Israel and Sunni Arab states find themselves on the same page vis-à-vis the Iran threat. Were an Arab country perceived to be hostile to the US or the international community, it would be attacked without hesitation. On the other hand, this administration is treating its ‘favorite enemy’ with a silk glove instead of the iron fist it deserves. This sure feels like a pro-Iranian administration.”

Dubai-based publisher Madarek last year released an Arabic translation of Saudi Arabia and the New Strategic Landscape by Joshua Teitelbaum, a professor at Bar Ilan University’s Begin-Sadat Center for Strategic Studies in Tel Aviv. Mr. Teitelbaum encourages US  policy makers to cement America’s alliance with Saudi Arabia by addressing the Iranian threat to Saudi domestic politics. In his book, he explains that Gulf Cooperation Council countries such as Bahrain, Kuwait, and Saudi Arabia, which have significant Shiite populations, have been jittery about Shiite Iran for years. Such jitters are very well founded, Mr. Teitelbaum argues. Among other worries, in 2009, according to Israeli sources, the UAE uncovered an Iranian plot to blow up the world’s tallest building, the Burj Dubai, now called the Burj Khalifa.

Madarek is owned by Saudi journalist Turki bin Abdullah Aldakhil, General Manager of Al Arabiya Television News Network in Dubai. He also interviewed scholar Rashid Al-Khayoun on Al Arabiya regarding the Farhud — a 1941 pogrom against Iraqi Jews, which prompted their exodus. Mr. Aldakhil also founded the Al Mesbar Center for Arab Scholarship and Expertise for Peace and Stability in the Middle East. In September 2014, this think tank published Yusif Al-Mutayri’s paper, “Jews of Kuwait: Presence, Situation, and Emigration (1860-1952).” This work highlighted the historically meaningful economic and cultural role of Jews in Kuwait. Just a few years ago, it would be unthinkable that an Arab institution would recognize Jews as capable of anything other than “anti-Palestinian oppression.”

The last decade has witnessed improved understanding and growing trade between Israel and the six member nations of the Gulf Cooperation Council: Bahrain, Dubai, Oman, Qatar, Saudi Arabia, and the United Arab Emirates. Credit Suisse launched an emerging-market credit fund in 2010, headed by the Qatar Investment Authority, Saudi Arabia’s Olayan Group, and Israel’s IDB Holdings. In 2006, Idan Ofer, chief of Israeli shipping company ZIM came to the defense of DP World, which was embroiled in the debate over allowing Dubai’s companies to manage U.S. ports. In a letter to then-Senator Hillary Clinton, Mr. Ofer wrote: “DP World has been an industry leader with regard to security and works closely with us on an ongoing basis to maintain the highest security standards in all its terminals around the world.”

While Saudi Arabia and the UAE slowly have been improving their relationship with Israel, they have at the same time been resolute in their opposition to Iran. According to news accounts, Wikileaks cables uncovered these gems:

In a 2008 cable from Saudi Arabia’s then-ambassador to the U.S., Adel al Jubeir, King Abdullah offered “frequent exhortations to the U.S. to attack Iran and thus put an end to its nuclear weapons program,” As Mr. al-Jubeir recalled the king’s advice to America: “He told you to cut off the head of the snake.”

“That program must be stopped,” Bahrain’s King Hamad said, according to a November 2009 cable on Iran’s atomic ambitions. “The danger of letting it go on is greater than the danger of stopping it.”

This past April, hours after Secretary of State John Kerry told a U.N. nuclear non-proliferation meeting in New York that a deal with Iran was “closer than ever,” Riyadh appointed as its new foreign minister Adel al Jubeir, the kingdom’s former ambassador to Washington. This is the first time that position has been held by anyone outside the royal family. Mr. Al-Jubeir’s appointment sent a clear message: Jubeir was the target of a foiled plot by Iranian agents who aimed to assassinate him in 2011 as he dined in a Georgetown restaurant.

Mr. Cruz told the small group of Jewish business leaders I assembled (and he repeated in Washington the following week) that “the next president who enters the White House in January of 2017 is likely to encounter a world with Iran on the verge of having nuclear weapons where sanctions will have been taken off the table by Barack Obama, because they cannot be placed back with our allies in any reasonable period of time to prevent Iran from acquiring nuclear weapons, which means in all likelihood the next president will face a binary choice: Either allow Iran to have nuclear weapons or use military force to prevent it. This deal makes war a certainty.”

In March it was reported that Israel and Saudi Arabia are completely in synch on Iran. Several reports have surfaced detailing meetings between the Mossad and Saudi intelligence to coordinate in-flight refueling of Israeli aircraft and rescue operations for downed pilots en route to demolish Iran’s nuclear capability.

At last week’s Camp David summit, the gulf states staged a boycott of their own. Four invited heads of state didn’t bother to show up to meet with Mr. Obama, underscoring the growing divide between the White House and America’s former allies of the GCC. It also signaled a realignment of Israel and the GCC, much to the chagrin of Obama, Congressional Democrats, and the ayatollahs.

Kalman Sporn is a Middle East strategist and advisor to Vatican based Dignitatis Humanae Institute. Reach him on Twitter at @kalmansporn. 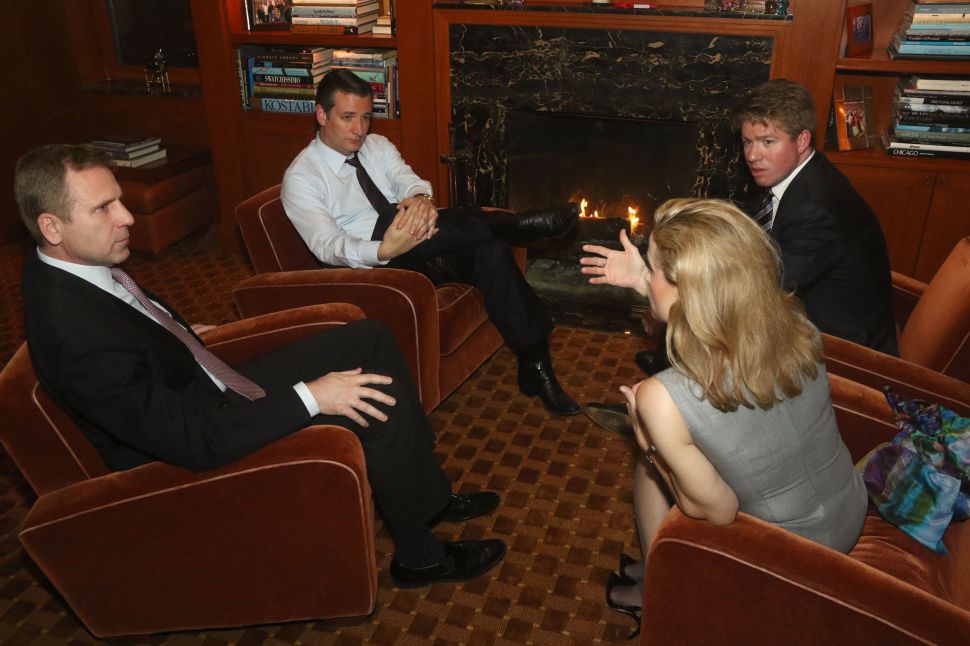