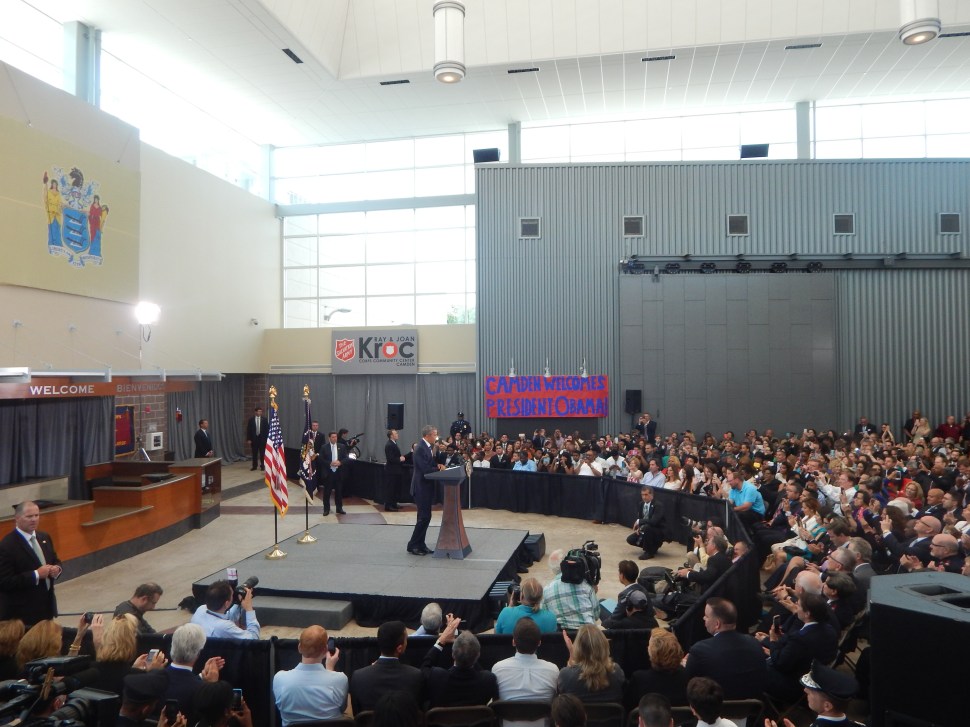 CAMDEN — President Barack Obama told a roomful of residents and state officials this afternoon that if the project of community policing and urban revitalization can work here, in this 80,000 resident city in South Jersey, it can “work anywhere” in the country.

Obama, speaking at the Salvation Army Ray and Joan Kroc Corps Community Center of Harrison Road after visiting the county’s police headquarters earlier today, said he was wants to hold Camden up as “an example and promise to the nation” of what can be accomplished when lawmakers, police, and local stakeholders come together to solve problems within their communities.

He said that while Camden is “still a work in progress,” officials here are “on to something.” He rattled off a list of statistics highlighting the reduction in crime and drug-related arrests the city has seen in recent years — violent crime down 24 percent, murder down 47 percent, a black market for drugs cut by 65 percent — and attributed the progress largely the work of police building “trust” with residents.

“You’ve made real progress in just two years,” Obama said. “That’s why I’m here today, because I want to focus on the fact that other cities across America can make similar progress.”

Last year, Obama named Camden a “Promise Zone” after commissioning a task force to study the work urban leaders across the country were doing in the areas of community policing and reform. The designation will help the city secure federal funding for revitalization efforts, officials say.

Obama is not the first public official to tout Camden, historically one of New Jersey’s most violent cities, as a success story — Gov. Chris Christie, who was not here today and whose name Obama did not mention over the course of his 20 minute speech, has also strongly leaned on Camden to underline the state’s achievements in urban renewal and police reform. But the president’s visit does mark the continuation of an ongoing strategy by his administration to address inner city poverty and injustice, a mission spurred by the unrest surrounding recent instances of police violence in places like Baltimore, MD, and New York City.

Earlier today, and during the speech, Obama detailed a policy to ban federal transfers of certain types of military-style gear to local police departments, saying overly-militarized law enforcement can “alienate and intimate residents.” He also called for enhanced officer training and the use of body cameras in local departments to increase transparency and combat the kind of oversights that occurred in Baltimore, where Freddy Gray, a black male arrested for possessing what officers claimed was an illegal switch-blade, died in police custody earlier this year.

“In some communities that sense of unfairness and powerlessness has contributed to dysfunction in those communities,” Obama said. “You know, communities are like bodies. And when the immunity system is down, they get sick. And when communities aren’t vibrant, where people don’t feel the sense of hope and opportunity, then that can fuel crime and unrest. We see it in places like Balitmore and Ferguson and New York. It has many causes, from basic lack of opportunity, to some people feeling unfairly targeted by their police forces.”

He stressed that while these measures have worker in some communities, there is no single solution — there “has to be a lot of different solutions and approaches that we try.”

“One of the things I’m trying to focus on is that a lot of the issues that have been raised here, and in places like Baltimore and Ferguson and New York, go beyond policing. We can’t ask the police to contain and control problems that the rest of us aren’t wiling to face or do anything about,” he said. “If we as a society aren’t willing to expand opportunity to everyone who is willing to work for it, then we’ll end up seeing conflicts between law enforcement and residents. If we as a society aren’t willing to deal honestly with issues of race, then we can’t expect police departments to solve with these problems.”

In the end, Obama said that both residents and public officials must “take responsibility” for the problems facing urban America.

“In the city hall in Camden, you’ve got an inscription by Walt Whitman: ‘In a dream I saw a city invincible,'” Obama said. “In a dream I see a country invincible, if we care enough to make an effort on behalf every child in America.” 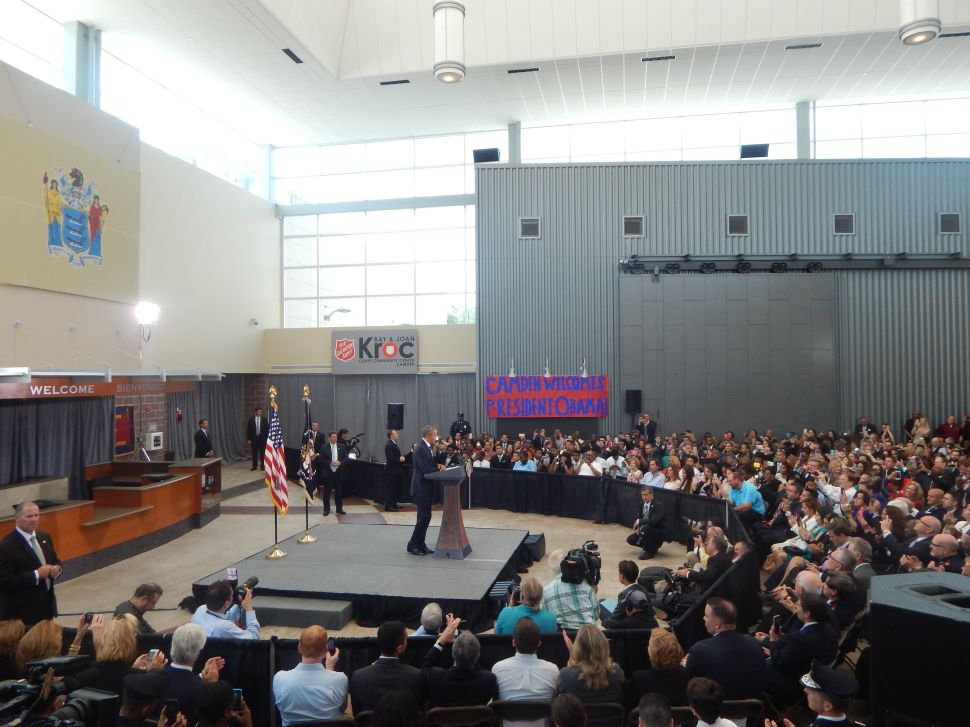