Well, looks like it’s that time again: dead-body disposal time! Seth, so recently killed by his clone-bro Rudy in Felix’s downstairs hallway, is now in his bathtub.

You’d think clone club would be old hands by now at figuring out what to do with inconveniently impossible-to-explain corpses. But no. Felix proposes that they ask Mrs. S, who knows all sorts of nasty-type things like how to dissolve a body. Sarah doesn’t want to ask her, though, having so recently depended on her to get Kira out of the country.

(And now I’m confused. All of those arrangements for Cal and Kira to move to Iceland, and all of the tearful goodbyes, all of that happened after Rudy broke into the loft and grabbed Kira, and then shot Seth. Presumably it all took at least, say, a day? So why are Felix and Sarah only now dragging the body into their place? And why does it look like he was just shot minutes ago, with bright red blood streaking the floor and their clothes? The timeline seems awfully wonky.)

Before they can figure it out, there’s a pounding at the door. It’s Art, who quickly discerns that something is amiss, barges his way in, discovers the body, and is, shall we say, displeased. Sarah: “OK, first off: It wasn’t us.”

Somewhat surprisingly, that’s totally true in this case. This murder basically had nothing to do with them—it just happened to go down in their hallway. Which makes me wonder: Why didn’t Sarah just call Art as soon as Seth was killed? They’re really totally blameless here, so why not bring the cops in? I mean, Art already knows about these clones: He showed Sarah a surveillance photo of them only like a day ago, after they sprang their creepy twin sex game on an unsuspecting drunk girl.

But instead, Fee and Sarah decide to try to hide it, making themselves look super-shady. (Which they are. But they’re not usually quite this dumb about it.)

Miraculously, it turns out to be a good thing they still have the body, since Cosima and Scott want to examine its brain to figure out why Castor clones start “glitching.”

See, their major malfunction is different than whatever is wrong with Cosima and the other Leda clones, as it seems to be neurological. Which explains why the Castor boys and their “mom” Virginia are so desperate to find Doctor Duncan’s tissue samples from the “Castor original,” as they may hold the only way to cure this “design flaw.”

In fact, it turns out pretty much everything any of the male clones has done on this show has been all about finding these tissue samples (or otherwise discovering a cure for their glitch). For example, Mark wasn’t actually AWOL when he joined the Proletheans, he was undercover—the military had discovered that cult leader Henrik Johanssen had somehow gotten his hands on Duncan’s samples, and so Mark was sent in to join the group and try to find them.

When he failed, the Prolethean compound burned, and Mark pretty much dropped off the map, Team Castor sent Rudy and Seth in to try to flush out the samples instead. And they arranged for the capture of Helena in order to see if she has the same glitch as the boy clones—this was the purpose of the torture “stress test” and the Blade Runner eyetap “neurocog.” She passed, though, so now they’re keeping her to try to see whether her better-working biology can help them. But their best bet for a cure is still the tissue samples, so they’re sending Rudy back out to find Mark.

Of course, if they knew the truth, they would be actually torturing Helena for information instead of just stress-testing her, as she is the only one (except for Kira, possibly) who knows where the samples are: She stole them from Henrik’s compound and hid them in Felix’s loft on the night of the four-clone dance party, a.k.a. the best use of green-screen technology in cinematic history, a.k.a. my forever happy place.

(Oh also, note how bad at his job Mark is. He spent years with the Proletheans and never found the tissue samples, but off-her-rocker Helena, who didn’t even know what she was looking for, managed to scuttle away with them in just a few weeks.)

Mark thinks that Henrik left the samples for safekeeping with an old friend from his militia days, Willard Finch. He wants to finish his mission and bring them to Team Castor in exchange for his freedom, so he can go live happily ever after with his new bride, Henrik’s daughter Gracie.

Showing wisdom and fortitude beyond her years—being forcibly impregnated by your father with his test-tube baby will apparently grow you up right quick—Gracie convinces Mark to let her get the stuff from Willard without bloodshed. But the package he gives her is just Henrik’s papers. So Mark decides it’s his turn and goes after Willard.

In the meantime, and by fairly unlikely coincidence, Sarah and Art have just met Willard themselves. See, the reason Art came to the loft in the first place was that he got a lead on the ex-Prolethean midwife who helped impregnate Helena. She tells them that Mark and Gracie ran off together in Henrik’s truck, which Art traces to the town where Willard lives.

Willard doesn’t give them much, and Art goes back to the city. But Sarah stays and runs into Gracie, whom she tells that Mark has been lying to her: He’s a clone.

A disillusioned Gracie runs into her mother’s arms, and Sarah runs to Willard’s to find Mark. He’s still there, having tortured Willard accidentally to death trying to get the tissue samples out of him. Just then, Cosima calls Sarah to tell her that their brain scans have revealed that the Leda and Castor “originals” were actually siblings. Genetically, therefore, Sarah and Mark are—surprise!—brother and sister. A fact that comes in immediately handy for Sarah when convincing him not to kill her.

And then Mrs. Johanssen shows up and blows Mark’s brains out with a rifle, while Sarah looks on helplessly.

In other news: The Defense Department is thinking of shutting down Project Castor, because its “weapons system,” i.e. the clones, is “malfunctioning,” i.e. has a degenerative brain disease. So Paul has to go to D.C. to convince them to extend their funding. But not before Helena faces him down from her prison cell and makes the astute observation that the dirty boy has already slept with three of her sisters: Beth, Sarah and Rachel.

Speaking of Beth: Art admits that he was in love with her, and now he seems to be developing feelings for Sarah. And speaking of Rachel: she’s pretty severely brain damaged, but apparently improving. Doctor Nealon tells her that the world thinks she’s dead, but that she still has a role to play—something involving the Castor clones.

And finally, as always, Alison: She’s off doing her thing in Bailey Downs. Her thing now involves being a drug dealer—ahem, “pharmaceutical entrepreneur”—who passes pills under the guise of selling homemade soaps, and using her new profession to make friends with/wheedle/blackmail everyone to garner support for her run for school trustee.

The way Orphan Black is set up, it is always tempting to treat Alison’s life, so separate from the intrigue surrounding her sisters, as a kind of comic relief sideshow. But her scenes are always so cleverly and subtly written that it’s a mistake to do so; her world is always reflecting, distorting or underlining what’s happening in the rest of the show.

For example, this episode was once again centered on biological materials—blood and bone, tissue samples and brain matter—and the uncanny disconnect between how we see ourselves, as people with minds and souls, and the messy and inert stuff we’re really made of.

“God, is this what we are?” Cosima exclaims as she cuts the top of Seth’s skull off with a saw and slices out his brain, while Scott and Felix look on and retch.

And you’d think this world of bone saws and sinews is very distant from Alison’s sphere of social cattiness and small-town politics. But then we see her in her garage cooking up a new batch of homemade soap. And of course, what is bubbling in those pots? A key ingredient in soap (as anyone who has seen Fight Club knows) is rendered animal fat—which has to remind us that there in the garage, buried just below their feet, lies the moldering body of Dr. Aldous Leekie.

“Soap is the perfect cover” for their drug dealing, remarks Donnie—but every mask is just another version of the thing it hides. The episode’s body horror isn’t a far-off spectre for Alison. It’s always there, simmering away just beneath the surface. 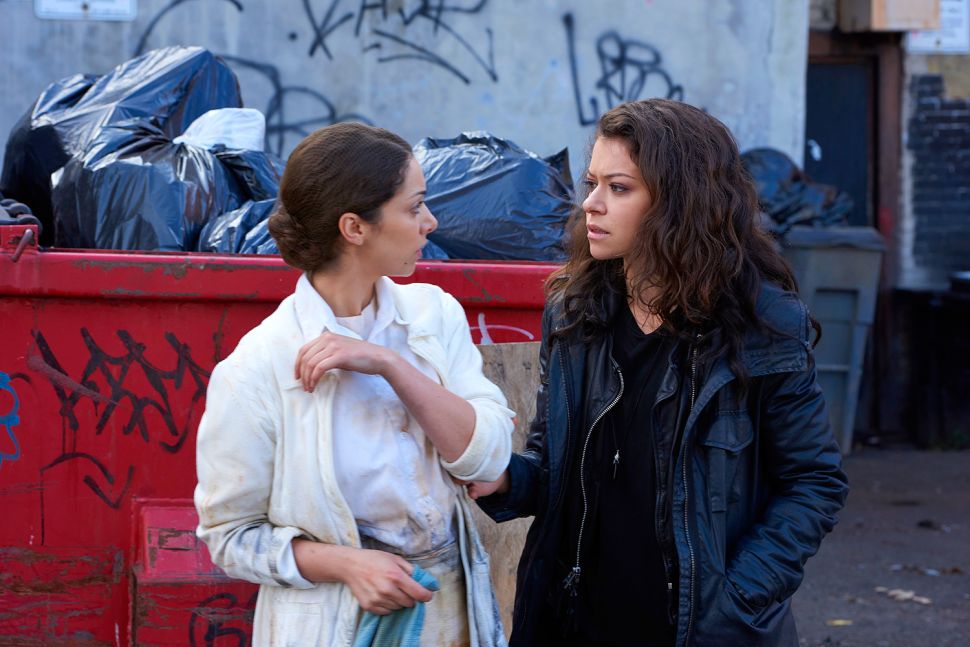