For such an outwardly chaotic show, you’ve really got to admire the constant and clever use of symmetry in Orphan Black’s writing. At the beginning and toward the end of this episode, we witness twin sisters Sarah and Helena, off on very different missions, separated by thousands of miles (and god knows how much mental illness), doing the same thing: Each puts her own life and safety on the line to rescue someone whom she should, by all rights, think of as her enemy.

This mirroring—remember that Helena is literally a mirror image of Sarah—is even more explicit, because the two men that they rescue are clones of one another. But while Sarah saves a mortally wounded Castor clone’s life, Helena liberates another by killing him, putting him out of his misery.

The clone Sarah saves is Mark, late of the Proletheans, who’s just been shot by his terrifying mother-in-law Bonnie Johanssen. But Mark’s not dead, and Sarah, who was being threatened by him only moments before, now comes to his aid, spiriting him away and tending to his wounds. Including a truly wrenching scene in which she removes a bullet from his leg with a pair of needle-nose pliers, because one thing we know for sure about Orphan Black is that it will never flinch from showing us the reality of the human body, in all of its meaty, sinewy, bloody glory.

Mark tells Sarah about Henrik Johannsen’s notebooks, and she sends a cellphone photo of one of the pages to Cosima (whose only other purpose in this episode is to pine over Delphine and to reluctantly let Felix put her profile up on “Sapphire,” which is either some sort of Tinder for lesbians, or just this show’s alt-reality version of regular Tinder, and either way it’s stupid). Anyway, miraculously, out of the probably thousands of notebook pages, the random page Sarah sends Cos just happens to be the specific page on which Henrik took notes about his successful creation of a clone from the Castor tissue.

Henrik and Bonnie did have a baby who died. So Mark and Sarah go dig up the creepy baby coffin in a creepy little cemetery out back of a creepy house. Because little dead Abel Johanssen’s DNA should be able to cure the Castor clones—and hopefully then the military will let both Mark and Helena free.

But then clone Rudy breaks up the party with his scar and his gun and his general psychosis, and Mark only narrowly saves Sarah from being shot by pulling rank on his brother. Which raises one interesting question: If these male clones are not only genetically identical but were raised all together, then they have both nature and nurture in common. So how do they have such different personalities, such that some of them attain higher ranks than others in the Army? What other factor is in play here?

Meanwhile, Helena and her imaginary pet scorpion have devised a weird plan to escape from their desert prison, involving carving a key with her teeth out of a bone she saves from her lunch. (Amazing that she left any bones behind—don’t you just sort of assume Helena eats everything and anything they put in front of her? The sandwich and the paper it came wrapped in and the plastic tray they served it on, etc.? Like a goat?)

But instead of escaping along her planned route, Helena gets curious about the clone they seem to be experimenting on in a nearby lab. His name is Parsons, and he is strapped to a chair with the top of his head removed and his brain exposed. He begs Helena to kill him, and she obliges, stabbing him in the brain with a scalpel. And then Doctor Cody and the entire base converge on Helena and she’s back where she started.

While everyone else is trying as hard as possible to escape from their various cages, Alison is determined to walk headfirst into one as it slams into place around her. It seems Ramon not actually the owner of the drugs he sold to Alison and Donnie. He was selling them for a dealer and had presumably planned on skipping town with them until Alison offered to buy his business. How much more convenient to skip town with the Hendrickses’ money and leave them (literally) holding the bag. Now the big bad dealer wants his goods back. But then he turns out to be an old bad-boy boyfriend of Alison’s (played by Justin Chatwin), and she makes a deal with him to be his conduit to the suburban housewife community. There’s no way this could possibly go wrong.

(Honestly, I’d really be tired of Alison and her terrible decisions if it weren’t just so delightful watching the way she and Donnie interact. Kristian Bruun’s willfully obtuse line readings get better with each passing episode.)

And finally we have poor little Gracie, who is making some very bad decisions of her own. Her mother brings her to where the remaining Proletheans are holed up, in the house of a sketchy old blind man with the dubious name of Mr. Appleyard. He is some kind of country doctor, it seems, and he creepily rubs Gracie’s pregnant stomach. As if it weren’t clear enough that these people’s belief system and way of life is a dead-end, the hymn they’re singing as he feels her up is “Nearer My God to Thee”—you know, the song that the band played while the Titanic sank.

Anyway, Gracie suffers a miscarriage, and Bonnie promptly blames her and then tosses her out on her ass. Coldly explaining that she let her daughter back into the fold only because she brought the child with her, and now she has no use for her anymore.

And maybe now it’s time to ask: Has Orphan Black actually, on some level, been a show about abortion this whole time? With all this talk of women being merely vessels for children, a scene of a miscarriage, and the entire future now hinging on who controls a coffin with a dead baby in it, there seem to be quite a lot of plot points surrounding the nature and future of fetuses.

Also striking is the way Helena treats the suffering Parsons like he’s her child, singing to him, calling him “lambchop,” right before she kills him—with a scalpel. (And what song is playing softly in the background while she does it? Yep, “Nearer My God to Thee.”)

Not that the show seems to be taking any clear stance on abortion. It certainly seems to place a huge value on lineage and children, with multiple plots that revolve around saving vulnerable kids, including unborn ones. On the other hand, it is also fundamentally a show about a group of strong women who defy powerful men’s attempts to control them and their bodies. In the end, it’s an issue that is like everything else on Orphan Black: more complicated than you think. 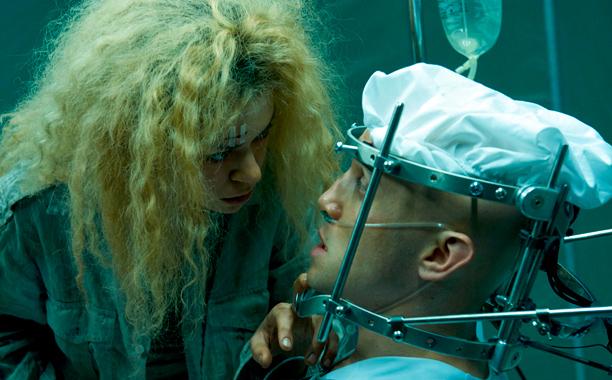