It’s hard to imagine a television show giving a word as much power as Orphan Black does with the word ‘sister.’ Every time any character says it aloud, it becomes increasingly freighted with the weight and import of all that a relationship between sisters could possibly be or mean.

Witness Cosima’s eyes lighting up as she half-truths to her (slightly jealous) new lover Shay that Sarah is “my friend. She’s like my sister.” Or Felix—who has never once appended to Sarah the prefix “adopted” or “foster—screaming at brain-damaged Rachel with genuine fear and rage: “Tell me where my sister is!” Or Helena finally being goaded into action by her imaginary friend, the devilish scorpion Pupok, by the suspicion that “your sister is more important than your baby.”

But the most devastating example in this week’s episode is spoken by a character we’ve hardly seen or heard from: Beth Childs, the clone whose suicide in the very first scene of Orphan Black set all of its events in motion. Sarah, trapped in a fever dream, is led into the past (by yet another sister, Marian Bowles’ clone daughter Charlotte) to finally “meet” Beth face to face.

After reminiscence and recrimination—Sarah did hijack Beth’s entire life, after all—dream-Beth turns to her sister and tells her she’s been looking at the whole clone puzzle the wrong way. “Stop asking why; start asking who.” In other words, you’ve been spending all of your time trying to figure out what your purpose is, or why clones were created in the first place. When you really should be asking who: for whom were you created, perhaps, but also who are you, really? And for whom are you doing all of this?

And then she looks straight into Sarah’s eyes and says that one word: sister. Reaching back from death to give her the embrace the word implies, that relationship and that forgiveness, which Sarah has clearly so desperately needed—and also supplying at least part of an answer to her question.

And then she turns and throws herself in front of that train once again. And Sarah gasps awake, her fever breaking. I don’t know about you, but suddenly I found I had something in my eye.

Sarah’s fever is brought on by Dr. Virginia Cody, who intentionally infects her with Rudy’s blood, basically just to see what will happen. Since Sarah’s biology is unique; just like she should be sterile like her sisters, she also reacts differently to the infection. She gets a fever but she’s nowhere near as sick as Gracie or the other women.

Being that the Castor clones, genetic siblings to Sarah and her sisters, generally get their female victims sick through sexual contact, this whole thing with Rudy’s blood being injected into Sarah without her consent is not just a horrifying violation but one that reeks of incest. It is also exemplary of the twisted way in which Dr. Cody pursues her research.

Because it turns out that she is actively encouraging the clones to go out and infect women with their nasty sperm. Because she is trying to isolate the pathogen to use as a biological weapon, one that will supposedly “end all wars.” Though why this particular disease, which eats men’s brains but makes women sterile, would be such an important, peace-bringing bioweapon is left very vague, and it sort of seems like Dr. Cody is just another crazy science wingnut.

That’s certainly what Paul Dierden thinks. With the help of a sympathetic Mark, he finds evidence of Cody’s illegal “field test” on innocent women. He puts the base on lockdown until an extraction team can arrive. But his contact in Washington never actually sends a team. The unnamed bureaucrat clearly already knows about and is probably directing Cody’s research, so instead he calls and tips off Rudy, who is out in the desert hunting the escaped Helena. Rudy breaks back into the base and sets Cody and one of his clone brothers free. (The show keeps suggesting that there are lots and lots of Castor clones, but we’ve only seen five—Mark, Rudy, Seth, Pearson and this guy in camo fatigues, whose name may be Miller—and two of those are already dead. Where are all of the others? Are they off on other secret missions? Or did the show just decide it was using Ari Minnen/green screen too much?)

Paul figures out he’s been set up, breaks Sarah out, and kills the other clone, but not before the clone gets him a good few times in the belly with a knife. He sneaks Sarah into a tunnel that will get her off the base, and then holes up to bleed out in Cody’s office. When she and Rudy find him there, he begs her to just use her knowledge to cure the clones, and leave the bioweapon research alone, but instead she just shoots him in the chest over and over. Which is when he reveals the grenade he’s been cradling in his lap, and blows himself and the whole office up, including all of the research—and the dead baby skeleton that was the Castor clones’ only hope for a cure to their illness.

Dr. Cody and Rudy dive out of the way, but it seems possible they were caught in the blast, being that Sarah, who is much farther away down in a tunnel, was knocked flat by it. (Ah, who am I kidding? This is a thriller TV show. There’s no way Rudy and Cody aren’t coming back.) Sarah comes to and there’s Helena, who has come back to rescue her after all, after swallowing her scorpion buddy to survive in the desert. (Who knew an imaginary friend could make a nutritious, sustaining emergency meal?)

It’s Cosima who discovers that the Castor pathogen sterilizes women. Delphine and her amazing hair have returned to Dyad, supposedly because she has heard that Sarah is missing, but actually mostly to tell Cosima she misses her, and to telephoto-lens-stalk her new girlfriend. She does discover what Cos and Scott missed, though: The brain of dead clone Seth and the blood of alive-but-sick Gracie have the same weird protein defect. So they bring Gracie in for more tests, and it turns out she’s sterile. Which is disturbing but also kind of a relief for her, as it marks her final and complete break from her procreation-obsessed cult family.

The visit also gives Felix a chance to visit Rachel (“Take me to the Cyclops!”) in order to pump her for information on Castor that may help them find Sarah. He tortures her pretty cruelly, which only as much as she deserves, all things considered—but it’s still hard to watch her being humiliated in her wheelchair, protesting in stuttering, brain-damaged speech. She doesn’t know much about Castor, it turns out. What she does seem to know is something about Dr. Duncan’s secret codes: Scott discovers the same inscrutable symbols in her art-therapy paintings that appear in the margins of the late doc’s copy of The Island of Doctor Moreau.

And Donnie and Alison continue to be hilarious drug dealers. They dance in piles of money in their underwear. Donnie buys a new car (the fact that his idea of a sweet ride to buy with their ill-gotten gains is a Subaru is utterly priceless). And they plot to buy Alison’s mother’s handmade bath and body store, Bubbles, as a front for laundering their drug money, much to the grudgingly impressed pleasure of their new boss, the least scary drug kingpin in North America. 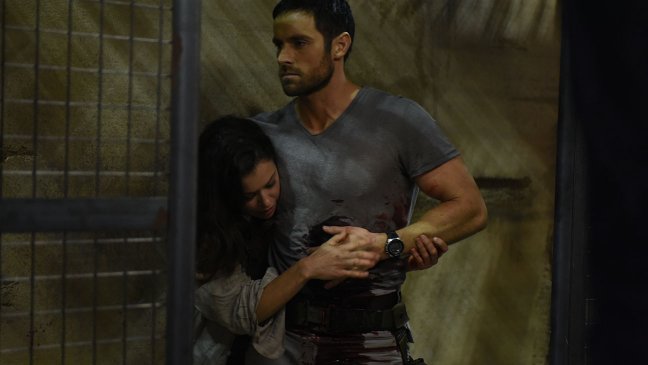