A coalition of Orthodox Jews and secular parents united this morning to demand that Mayor Bill de Blasio provide universal half-day pre-kindergarten slots to every parent in the city that wants one.

Speakers at the press conference, held outside a park in Bay Ridge, Brooklyn, accused Mr. de Blasio of making a “bizarre” decision to neglect half-day providers in favor of full-day programs, burdening both religious and secular parents who do not want their children in a program for the city-required six hours and 20 minutes.

“Many parents are actually saying, ‘We either don’t want, don’t need or can’t use full-day UPK. Instead, we want half-day UPK.’ And the option we’re giving them is full UPK or nothing,” said Councilman David Greenfield, a Democrat who represents the heavily Jewish neighborhoods of Borough Park and Midwood. “That doesn’t really make sense because parents have different schedules, they have different needs, children are different.”

Mr. Greenfield said many young children can’t “cope with” the full-day schedule, a complaint echoed by parents at the press conference. He also blasted the de Blasio administration for announcing on May 1 that they were soliciting proposals for a limited number of half-day programs without telling parents how many slots there would be and giving providers only three weeks to get back to the administration.

“Parents should have an option,” Mr. Greenfield continued. “Effectively what we’re telling parents is it’s the mayor’s way or the highway and that’s not fair because it doesn’t work for parents who have very diverse needs.”

“At this point, we have to stop playing games with parents,” he added, predicting that the majority of Orthodox students will not be enrolled in universal pre-K based on current requirements.

The press conference brought together Orthodox Union, a powerful advocacy group for the Orthodox Jewish community, and two leaders from the organization NYC Parents for Pre-K Choice, along with a handful of parents and the president of Community Education Council 20, covering schools in Bay Ridge, Dyker Heights, Bensonhurst and Kensington.

Orthodox Union has a fraught history with the mayor. After Mr. de Blasio announced that pre-K programs servicing Orthodox Jewish communities could accommodate their need for religious instruction by spreading out the required number of secular instruction hours over six days a week and providing for a “short break” in the secular school day for “nonprogram activities” like prayer, Orthodox Union slammed the de Blasio administration for not reducing the required hours for instruction. Mr. Greenfield and Jacob Adler, the director for policy at Orthodox Union, also called for Mr. de Blasio’s pre-K programs to require five hours of instruction, the amount mandated by New York State.

A de Blasio administration source said the administration is waiting for proposals to come back before determining how many half-day slots would be available.

“We saw a truly incredible response from families applying for full-day pre-K this year, and we will continue to encourage parents to give full-day programs a very close look, and urge providers who apply for half-day contracts to also apply for full day contracts since our half-day offering will be modest,” Richard Buery, the deputy mayor overseeing the pre-K expansion, said. “For families seeking to apply for half-day, we expect applications to open in June.”

But parents were not placated by the administration seeking an unspecified number of proposals for half-day slots.

“Our goal is not to threaten full-day pre-K but to give all parents the opportunity to be the parent and make their own judgments about what’s the best for them,” said Andrea Stockton, a member of NYC Parents for Pre-K choice. “It seems unnecessary to force full-day programs on everyone simply to meet a stated goal.” 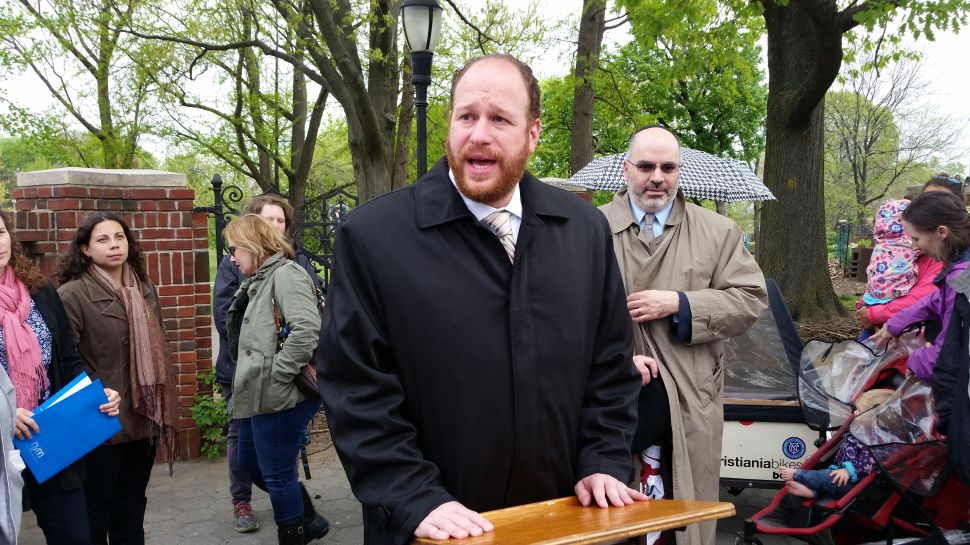