There are only three sure things in this world: you’re born, you die, and somewhere in between you’re betrayed by an Irishman. It’s the circle of life, and it’s what “The Watch,” this week’s episode of Outlander, is all about. And as is too often the case when universal themes are addressed, the specifics wind up mattering very little. If you’ve seen a complicated labor, a botched raid, or feckless Fenian in any TV show or movie before, nothing done with them here will cover new ground.

The birth storyline is the most perfunctory of the three. The moment Jamie’s very pregnant sister Jenny cries out in pain, you know you can kiss at least fifteen minutes of screentime devoted to a woman screaming, another woman saying “push!”, a baby crying, and a mother weeping tears of joy goodbye. To the show’s credit, a couple of scenes in the otherwise standard sequence stand out: The closeup of Claire’s hands on Jenny’s belly as she attempts to palpate the baby out of breech position provides a tactile, physical link between the Miracle Of Birth and the flesh that produces it, while Jenny’s speech about how it feels to be pregnant — featuring a lengthy comparison to the sensation of vaginal intercourse and delivered with her body’s curves silhouetted through her translucent gown — directly connects conception and delivery. But there are no surprises otherwise — certainly not the biggest potential surprise of all: an easy, happy labor, which remains all but unseen on television — and the crosscutting between Claire and Jenny during the birth and their husbands Jamie and Ian en route to an appointment with a redcoat ambush is a shopworn cliché.

That ambush storyline also has its moments, and they too are drowned out by more predictable fare. Things get off to a rough start right away, when last episode’s cliffhanger — omg, people have come to capture Jamie! — is revealed to be much ado about nothing — nbd, they have no idea who he is. “They” are the Watch, a squad of rough customers who protect lightly defended lands from raiders and redcoats alike, for a price. Jamie, going under an alias, at first feels the price is to high, and the central-casting goons who put their feet up on his table and light his hay on fire to spite him do little to dissuade him. As is now custom with Outlander, they’re so overtly repugnant that there’s nothing to hold our interest, either.

But Jamie is won over by their leader, Taran MacQuarrie, and I’m betting a decent chunk of the audience is as well. MacQuarrie’s a thief, but he’s no bully, and Jamie’s brother-in-law Ian has come to value his efforts in keeping clan lands clear of brigands and Brits alike. Taran’s a veteran of the same French wars as Jamie and Ian themelves, and he sees in the clandestine clan leader the same warrior spirit that drove him to his current line of work once the wars wound down. “I’m a fighter, and damn good at it,” MacQuarrie tells him as they ride to a potentially lucrative raid in the strongest dialogue of the episode. “I got tired of fighting for rich dukes and monarchs. I realized the world was mine, and money taken is twice as sweet as money earned.” Emblematic of this attitude is a death’s-head watch (get it?) he’d stolen in a previous raid, with the inscription “Pale death visits with impartial foot the cottages of the poor and the castles of the rich.” If the grave awaits master and servant alike, why not be your own man in the interim? This sequence’s striking writing, and its emphasis on characters willing to go against the grain in a harsh and unforgiving system, are reminiscent of Game of Thrones, a high compliment indeed for any drama of this sort.

In the end, though, our brave boys fall right into a trap laid for them by the British, leaving Ian to limp back home and tell Jenny and Claire the bad news: Jaime and Taran have been captured. Yes, again. This was the doing of Horrocks, the Irish lowlife who went AWOL from the redcoats and who provided valuable eyewitness testimony for clearing Jamie’s name. This, of course, means he recognizes the man, and threatens to expose him unless he coughs up tons of cash. That, of course, gets him killed, as neither Jamie nor Ian are ultimately willing to take that kind of risk. In the meantime, though, he was working another angle entirely, planning the Watch’s raid so that they’d wander right into the redcoats’ crosshairs in exchange for a pardon from the Crown. Actor Lochlann O’Mearain’s twinkling eyes and prodigious beard give him a memorable look — he’s the Robin Williams of the revolutionary era — but you can see his character coming from a mile away.

That’s Outlander’s problem in a nutshell: intriguing details don’t matter much if you’re bored to tears by the time you see them. And in an ep like this one, with the show’s trademark sexual openness off the table, there’s even less to keep the mind (or loins) occupied. Oh well, tune in next week for a daring (yawn) rescue, or something. 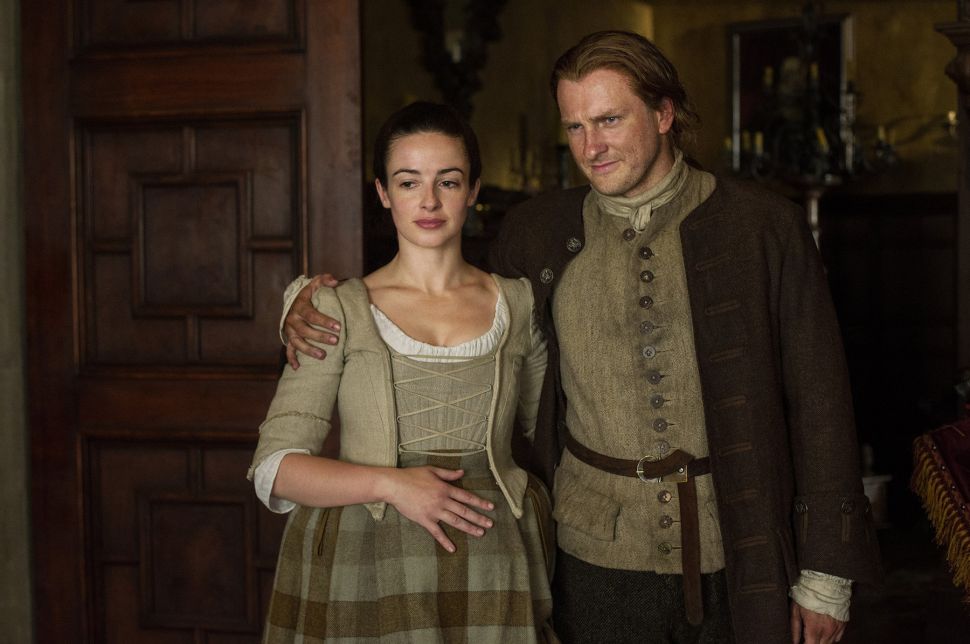