There’s a quote attributed to Star Wars impresario George Lucas via his ex-wife, Oscar-winning editor Marcia that speaks directly to what you and I and everyone who watched Outlander this week subjected ourselves to. As Peter Biskind tells it in his classic history of American cinema in the ‘70s, Easy Riders, Raging Bulls, “Emotionally involving the audience is easy,” George is said to have remarked. “Anybody can do it blindfolded, get a little kitten and have some guy wring its neck.” No kittens, I’m happy to report, were harmed in the making of “Wentworth Prison,” this week’s installment. But what happened was just as lopsidedly sadistic and nakedly manipulative, the only difference being that the target wasn’t a housecat, but a character with all the three-dimensionality and disposition of one. Like an episode of Hercules: The Legendary Journeys directed by Hostel auteur Eli Roth, “Wentworth Prison,” tonight’s installment of Outlander, is an experiment designed to see how badly cheese can bleed.

The asskicker? It started strong. The hour began with Jamie Fraser and his erstwhile compatriot Taran MacQarrie, captured with him in an ambush, stoically waiting in line for their own executions. In the quintessence of gallows humor, MacQuarrie joked — though the mirth never reached his lips or his eyes — that at least hanged men get one last hard-on as they die. “It takes the edge off of dyin’, knowin’ that when my neck snaps I’ll be dischargin’ my juice like a cannon blast.” “I heard tell all that happens is you shit yourself,” Jamie replies, unimpressed. “Well, so much for me tryin’ to cheer up a condemned man,” MacQuarrie sighs. “You have an awful dark view of the world, Fraser.” Throughout this profane exchange, their eyes never leave the gallows. This earthy, no-nonsense dialogue and blocking sets a somber, unsparing tone.

Unfortunately, that tone that is almost immediately thrown into discord. No sooner does the noose slip around Jamie’s neck than — you guessed it — he’s saved at the last moment by none other than Black Jack Randall, who wants to subject Fraser to a more hands-on death (in more ways than one, as we’ll see). Outlander’s obsession with cliffhangers and close shaves — cheesy and rote moves since before motion pictures had sound — is as inexplicable, given the sophistication of showrunner Ronald D. Moore’s work on the equally perilous, far less predictable Battlestar Galactica, as it is inexcusable. Hell, this isn’t even the only last-minute rescue in this episode! Constantly jeopardizing people only to say “nevermind” diminishes not just the gravity of the situation in plot terms, but also in ethical ones, denying death and violence the moral seriousness with which they ought to be handled.

Not that that stops the show from an orgiastic display of sadism and sexualized violence that lasts for half the episode and makes Game of Thrones as characterized by its most vituperative detractors look like Mister Rogers’ Neighborhood. When Randall gets Jamie alone in a dungeon — well, alone with him and a simple-minded torturer who, like most minor characters on Outlander, looks like the cover of Jethro Tull’s Aqualung — he proceeds to lord his superiority over his quarry in the most dully unsympathetic manner imaginable, for minute after endless minute. When he leaves for just enough time for Claire to infiltrate Jamie’s cell, he returns almost immediately and does this again, to her as well as him. Between the mustache-twirling monologues he smashes Jamie’s hand with a hammer, forces him to randall his Black Jack, and eventually nails the ruined hand to a table while forcing Claire to watch, as a prelude to a rape he made Jamie swear to endure in exchange for Claire’s freedom. All this on a show that repeatedly puts a metaphorical noose around the necks of characters it is in no way prepared to actually kill simply for the sake of cheap thrills? Stick it up your kilt.

There’s no sense in pulling punches here: It’s infuriating to be asked to suffer through the extended torture and humiliation of characters who, at every other juncture save perhaps their creatively choreographed sex scenes, are trotted around like action figures and posed like romance-novel covers. Outlander’s insistence that Jamie Fraser as a character, or Sam Heughan as the actor playing him, possesses the smoldering and unpredictable charisma required for him to make sense as the anchor of a crazy centuries-spanning love is as wholly unsupported by the on-screen evidence as the show’s claim that he has red hair. (It’s brown! We can all see it!) The man doing the humiliating and torturing has no shades of grey (ironically), no characteristics that make him feel human, or even just interesting as a complete black-hat villain. The less said about the legion of interchangeable dudes in beards and kilts, the better. Only Claire herself stands out, which makes watching her cry for this cipher a surefire way to undermine her power, and a genuinely maddening act of “emotionally involving the audience” by the Lucas definition. Dump her into a pile of corpses, make a mute goon sexually assault her, subject her to whatever indignity you can come up with in lieu of creating characters who equal her depth — it’s not going to suddenly make the show worth taking seriously. Quite the opposite! Calling Outlander soft porn has never been a fair critique. Now it’s torture porn, too, though. And it’ll leave you limp. 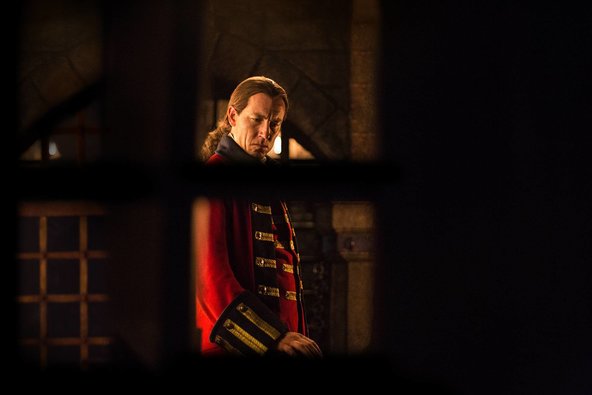