Outlander spent its first season finale chronicling the rape and recovery of its leading man in graphic detail. That much, at least, we can agree on. Where we go from there is more contentious, and every bit as important to the show’s future as Claire and Jamie’s mission to stop Bonnie Prince Charlie from rising is to Scotland’s.

So I’ll say this for “To Ransom a Man’s Soul,” the sixteenth and final episode of the show’s inaugural season: The brutality worked. To paraphrase Barry Goldwater, extremism in the pursuit of art is no vice, and creator and co-writer Ronald D. Moore’s decision not to flinch from Black Jack Randall’s protracted sexual assault on Jamie Fraser — including the part that traumatized Jamie the most, when he was able to mentally switch off the horror and let his body experience pleasure — was, I think, virtuous. Yes, the gender of both participants may have afforded him some leeway in the critical discourse that, say, Game of Thrones no longer enjoys (though it backfired with some critics who pointed out, quite rightly, that the show treated Claire’s near-constant stream of sexual assaults like they were seasonal allergies by comparison). But Moore, co-writer Ira Steven Behr, and director Anna Foster quickly broke through whatever buffer of comfort the lack of male-female power imbalance may have provided and forced us to wallow in the very human suffering of a very traumatized victim. For that to happen, the cruelty of an unblinking camera eye was required. Excess created success.

But the success is fleeting. Shit, it’s gone by the end of the episode, by which point Jamie has been drawn out of his suicidal post-assault depression by a furious pep talk from his wife. He manfully eschews sedation when his friends cut off the brand Randall induced him to sear into his skin, and when the “JR” initials are duly carved out, a heroic highland reel begins playing, just in case it wasn’t clear that Jamie has triumphed over trauma. So what seemed like a genuinely challenging choice to spend the season finale doing the most un-season-finale-like thing imaginable quickly winds up being something you could cut a fanvid to Kelly Clarkson’s “Stronger” with, complete with a needle-scratch “I’m pregnant” moment from Claire to close it out. To give Jamie’s pain and shame the dignity they deserve would require not tying off their consequences in a neat little bow before the closing credits roll.

This is the problem with Outlander, really: It always feels like just a TV show. Rooting Randall’s torture of Jamie in the undeniable facts of physical — their nude bodies streaked with blood and spit and tears and sweat and lube — may have alleviated this fact, or obscured it if you want to be less charitable about it, by creating a sense of terrible intimacy. But who are they, really? Randall’s a one-dimensional sadist and Jamie’s a heroic hunk with more scars than facial expressions. The take-no-prisoners treatment of rape in all its horror, the sociopolitical ramifications of its emphasis on masculinity or recovery — neither factor matters all that much if the characters are ciphers, their story stays so predictably linear, and music and voiceovers tell you exactly how to feel about all of it at all times. Grading it all on a curve because the sex scenes are strong, or this sexual assault sequence was strong in an entirely different way, does no one any favors. 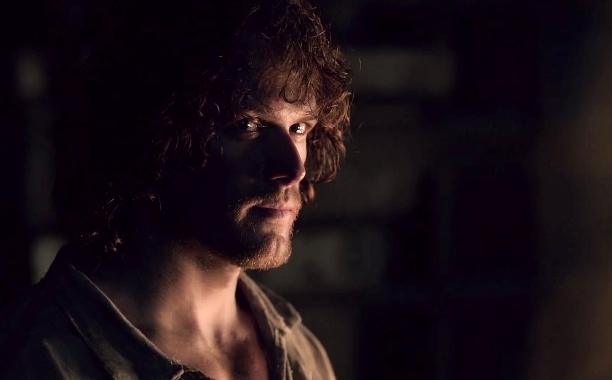