On Sunday in Washington, D.C.,—Memorial Day weekend— the annual “Rolling Thunder” gathering will draw hundreds of motorcyclists to ride together in a steady roar to honor living and dead war veterans, POWs and MIAs.

Except for the bikes, it probably won’t resemble the motorcycle club event of last Sunday in Waco, Texas, that left nine people dead and 170 arrested after a high-noon brawl that included guns, knives, chains and brass knuckles.

Nor will it be like the chase up the West Side Highway in Manhattan in September of 2013 that left an SUV driver bloody and bruised after being battered and stomped in front of his wife and two-year-old daughter by a motorcycle mob that included a New York City police officer.

The cop left State Supreme Court this week with a towel covering his face. He’s on trial for first-degree assault and could face prison.

“There’s like 100 motorcycles,” the victim’s wife said on a 911 recording. “They’re attacking us right in our car.”

Despite their sporadic mayhem and constant threat of violence, motorcycle outlaws don’t inspire the fear and public condemnation heaped upon, oh, say, for instance, black men on foot who loot and burn a CVS on live TV.

Instead, bikers are mythologized as cowboy-outlaw archetypes, desperadoes riding with big chips on their shoulders and big machines between their legs instead of big animals.

In his 1966 masterpiece Hell’s Angels, the author Hunter S. Thompson wrote: “The outlaw motorcyclist views the future with the baleful eye of a man with no upward mobility at all.” (Geez, might there be any people like that around nowadays?)

And outlaw bikers show reticent voyeurs the beast that beats in the breast of the rest of us. Through them, we viscerally understand something about our tribal nature: Humans are pack animals, especially men. From rowdy frat boys to the Ku Klux Klan, from rogue police forces to soccer hooligans, guys will do things in groups that they would never do as individuals.

This human undercurrent was portrayed most poetically in the 2002 film Gangs of New York, in which director Martin Scorsese showed Lower Manhattan of the 19th Century as a civic cesspool run by barbarians who eventually evolved into political parties.

But government and civilization make a thin veneer for what lurks beneath. Novels like The Road by Cormac McCarthy (2006) imagine what it might be like – cannibalism, anyone? — if disaster came and civil order ceased to exist and human society degenerated into predatory packs.

Prefer reality over fiction? Observe the films left by the Nazis and the videos uploaded by ISIS – gangs of vicious cutthroats who claim ideological legitimacy for murderous behavior. And with so many cameras recording so many things now, it’s harder for violent people – including violent police officers – to lie about what they’ve done.

Images – even fictional images – stir reaction. A century ago, The Birth of a Nation” (1915) sparked race riots, specifically white mob attacks on blacks. Video from the Texas biker battle has been shown by the Twin Peaks restaurant people to the police and to the Associated Press.

Perhaps careful study will show how many bikers were shot by other bikers and how many were shot by cops. Bikers, it seems, dislike cops as much as the “roving bands of black youths” who riot to protest deaths of young black men in police custody.

Wonder what emotions will be stirred up if those images ever get released in public? And it’s classic Texas stuff, too, from a state that sometimes threatens secession. Whacko Waco gave us the massacre of the Branch Davidians in 1993 when 76 people died, many at the hands of the feds.

Even dull-witted Texans like former President George W. Bush (who didn’t know Sunni from Shia) can comprehend a good throw down between the Bandidos and the Cossacks. And consider another powerful Texan, the Republican Senator Ted Cruz, a skilled demagogue and master of wedge issues and rabble-rousing.

One more major terrorist attack – another 9-11 or worse – could be televised and exploited into a mob stampede toward the 2016 Presidential election if frightened voters seek a “strong man.”

With Fox News and hate radio beating the propaganda drums and fear stirred up as it was in 2001, America might wake up one morning to President Cruz and a government taken over by politicians with the manners, ethics and instincts of biker gangs. 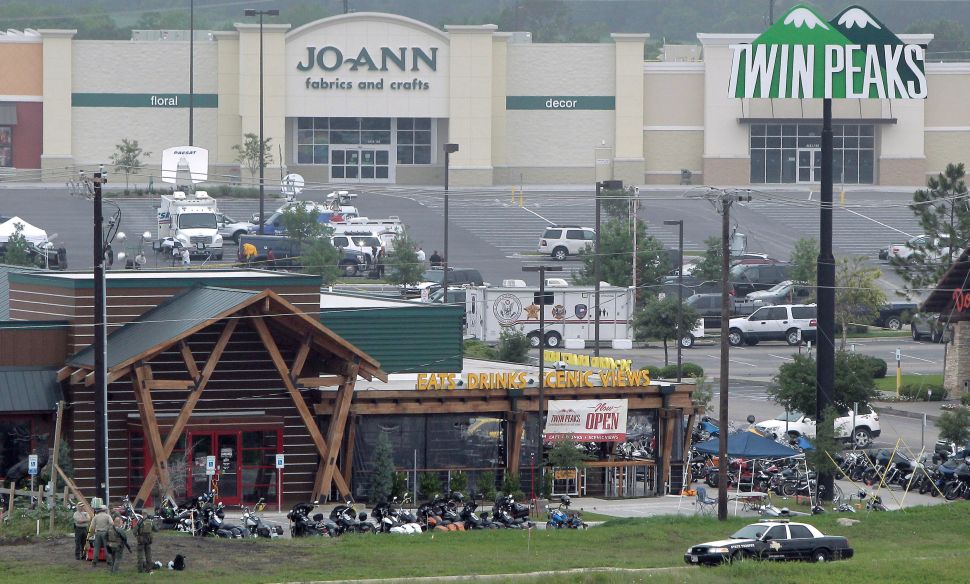