In this corner: Steve “The Iron Man” Sweeney!

In the other corner: Chris “The Governor And Don’t You Forget It” Christie!

Yes, the first round of the WWE budget match between Sweeney and Christie is well under way.

These two may have missed their true calling. They could have been big in the ring. Then again, New Jersey politics, at least the way these two practice it, is a lot like professional wrestling.

“Sweeney’s in bed with the unions!” the governor bellows.

“This economy is in a death spiral” and Christie is too busy campaigning for president to do anything about it, Sweeney counters.

It’s all nonsense, of course. Christie and Sweeney have struck countless deals beneficial to both (and to Sweeney’s patron, George Norcross). And I’ve been told by several sources that the two are actually close friends who like to chow down together.

Unfortunately, as these two wrestle, Atlantic City is the mat. I’m reminded, as I often am when it comes to Atlantic City, of an old African proverb: When the elephants dance, the grass gets trampled.

Sweeney has sponsored a package of bills that would provide some immediate financial relief to Atlantic City. One key measure would establish a payment-in-lieu-of-taxes program for the city’s casino hotels, which would pay a combined $150 million a year for two years and $120 million a year thereafter. Another would redirect to the city $25 million to $30 million in casino payments to the Casino Reinvestment Development Authority, to be applied directly to pay down city debt.

Successful casino tax appeals have decimated the Atlantic City tax base and forced tax increases in the city and throughout Atlantic County. Local officials from both parties say the measures are key to stabilizing tax rates and getting the city out of the financial mess it is in. State-appointed emergency manager Kevin Levin has also indicated that the legislation is critical to any economic recovery in the city.

So what’s been the holdup since Sweeney introduced the bills in December?

Well, Sweeney has invoked a new rule that I, at least, have never heard invoked before: He says he won’t post the bills for a vote until the governor says he will sign them. That’s pretty much a complete reversal of the usual process. The Democrat-controlled Legislature often approves bills whose fate in the Governor’s Office is unknown. It often approves bills it knows the governor is going to veto.

And Christie? He says put the bills on my desk, and I’ll consider them. But Christie knows he is going to sign him. Sweeney has said the bills were written with the blessing of the Governor’s Office.

Well the answer should have been obvious to all of us. And comments by Sweeney buried deep in an April 28 article by Andrew Seidman in The Philadelphia Inquirer made that answer abundantly clear. Sweeney dropped the inflammatory rhetoric and told Seidman, “I can tell you we’ll get the (Atlantic City) bills done, and we’ll get them done before we leave in June.”

Which means the Atlantic City bills will be pawns in the annual late-June budget battle.

Christie, of course, will need Sweeney’s help to get a budget passed. The Senate president’s opening salvo was to announce that Democrats will demand a full pension payment of $3.1 billion in the 2016 budget, $1.8 billion more than what Christie is proposing. That’s a big gap to fill and fight over. Sweeney is unlikely to get the full payment, but he scores points with the unions by demanding it. He’ll have to cave at some point – if not on the pensions then on some other key budget issue – and in return Christie will agree to sign the Atlantic City bills.

It will be chit for chit, and no one does it better – or with more bluster – than Christie and Sweeney.

I’m not saying I know what the exact budget deal will be. Anyone who does tell you he knows at this point is full of himself. But there will be a deal. The Atlantic City legislation will play a key role. And that’s why this critical legislation has been held up for so long.

Sweeney, by the way, will earn another chit from the governor, to be redeemed later, for allowing Christie to use the Atlantic City legislation as a bargaining chip.

So when does this chit for chit end? Never. This is New Jersey.

And Christie and Sweeney will still be calculating who owes whom what long after both leave public office. 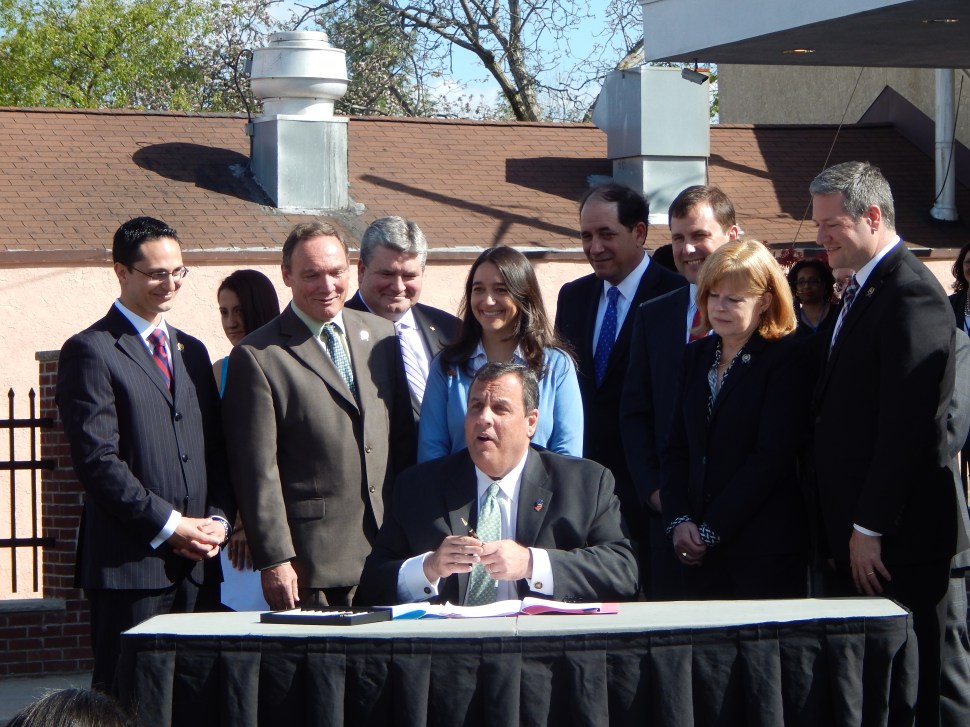