George Pataki—the three-term Republican governor who saw New York through the September 11 terrorist attacks—launched his presidential bid in New Hampshire today, with little of the fanfare one might expect for a candidate with his resume.

Mr. Pataki ran New York as a centrist Republican—but today, and in the lead-up to his run, he’s offered up more conservative rhetoric, vowing to slash the size of the federal government’s workforce and “preserve and protect” freedom.

“Government has grown too big, too powerful, too expensive, and too intrusive. Washington politicians and bureaucrats believe they know better than us, and can tell us how to run our lives, from what health care each of us can have, to trying to dictate what every child in every school must learn,” Mr. Pataki said.

On paper, Mr. Pataki is a strong candidate. He was able to defeat the late Mario Cuomo, a popular Democratic governor who was seeking a fourth term, and run a left-leaning state as a Republican for three terms. He’s a moderate who’s appealed to both sides of the aisle before. He ran New York but is from upstate, growing up on a farm. Both his sons served overseas in the armed forces. And yet, Mr. Pataki is considered among the longest of the long-shots in a crowded GOP field.

GOP operative Rick Wilson recently told the Washington Post that Mr. Pataki winning would be “like a monkey flying out of a unicorn’s [posterior].”

It may simply be that Mr. Pataki is not well-known. His big upset over the late Mr. Cuomo was more than 20 years ago. When most Americans think of an executive who presided over September 11, they remember Rudolph Giuliani, who made the experience a centerpiece of his own ill-fated bid for president. Mr. Pataki hasn’t held political office since his term ended in January of 2007, though he’s flirting with running for president twice.

Among big achievements of his days in New York, Mr. Pataki today pointed to reducing the size of state government, as opposed to big projects or moments people are likely to remember.

“In 12 years New York went from a State with the highest tax burden, the lowest credit rating, and billions of dollars in deficits, to a State with $143 billion in lower taxes, billions in surplus, and its highest credit rating in generations,” Mr. Pataki said today. “All it took was for me to get government out of the people’s way.”

That’s what Mr. Pataki said he’d like to do in Washington—promising to “shrink the size of the federal work force,” starting by giving pink slips to employees overseeing the Affordable Care Act and by firing “corrupt” IRS employees.

Mr. Pataki also vowed today to ban former members of Congress from “ever lobbying,” and to repeal Obamacare and end Common Core.

On foreign policy, Mr. Pataki spoke of his September 11 experience and has been more of a hawk than some hoping to earn his party’s nomination. He vowed to ensure Iran never gets a nuclear weapon and to provide “whatever aid necessary” to those fighting ISIS.

“And yes, if necessary American force will be used to actually defeat and destroy ISIS, so they can pose no threat to us here,” Mr. Pataki said. “We will not spend a trillion dollars or a decade nation building overseas. But, I will never forget the lesson of September 11th. We will destroy radical Islam’s ability to attack us over there, before they have the chance to attack us here. ” 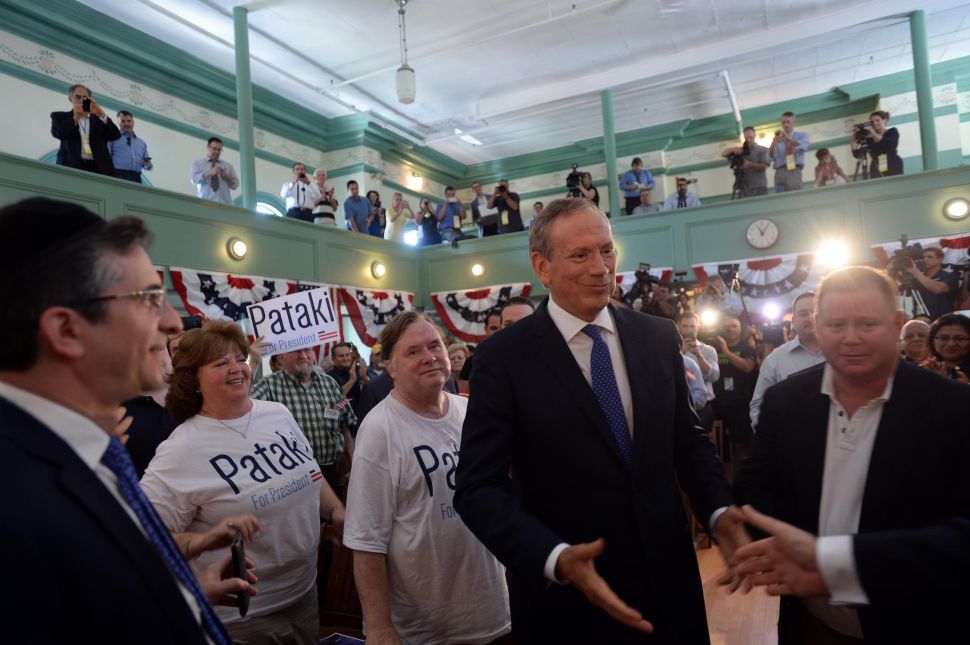