There’s something to be said for a 13 episode season of a television show. The storylines are usually kept tight and concise because of the limited time in which to tell them. Once you get over 18 episodes, things tend to meander. The episode Fugitive marks the 20th episode of the season with just two left, and the fatigue is setting in. Love triangles come and go. Long lost relatives turn up back at Court. Elizabeth is constantly talked about and never seen, as if she is the 16th century’s version of Tino from My So-Called Life. The endless emotional impasse in which Francis and Mary are embroiled seem is inspiring a certain amount of emotional fatigue on my behalf. However, the season is drawing to a close, which means this plot should start moving right along.

We’re starting to see signs of that movement now that Conde is involved in a full on plot to take over Francis’ throne, just as Francis feared. The real Conde was involved in a failed kidnapping conspiracy targeting the teen king after Henry died. However, he was never charged due to lack of evidence. Although the real life Conde survived that brush with treason, he died about nine years later in the ongoing wars between the Catholics and Protestants. So, maybe there’s hope that he’ll survive the season, even if it is an about face for his character since the fictional Conde has never shown much in the way of political ambition. He realigns with Elizabeth when her envoys rescue him from a botched escape attempt from France. Elizabeth is still keen on marrying Conde, but now she raises the stakes by demanding to wed a king instead of a prince, leaving Conde no choice but to take the throne from Francis. Although that may not seem like an attractive offer considering that Elizabeth already screwed him over once, but his only other option is to try slip out of France before getting beheaded. His one attempt to leave the country with forged papers provided by Mary was already foiled by Renaude, so it looks like a bloody coup is his only choice.  Of course, there is a loyal army of angry Protestants already chanting Conde’s name, so I guess that’s enough to light a fire under him.

As for Mary, it’s a wonder that Francis hasn’t had her beheaded for treason after learning that she helped Conde escape. That’s the power of love, I guess. You just kind of grit your teeth when your wife puts your entire reign, legacy and life  in jeopardy over a poorly thought out affair, especially when your wife comes back and grudgingly admits that she’s bound to you like two prisoners chained together in a dungeon after she’s done everything she possibly could to fuck you over. OLD BALL AND CHAIN, AMIRITE?

Given that Catherine seems to have no idea about the imminence of France’s fall to England, she’s wasting her excellent conniving skills on some Dangerous Liaisons-style con where she makes Narcisse prove his loyalty by completely crushing Lola’s spirits. He does so by distributing a drawing of her in the bath (of course in the bath) which I guess is the 16th century equivalent of leaking someone’s nudes on a revenge porn site and Narcisse is French Court’s very own Hunter Moore. Lola has the audacity to be surprised by Narcisse’s capacity for cruelty, which he points out, is laughable because at one time or another, he’s tried to have everyone she’s ever cared about killed. Lola plays the “but I know another side of you” card, which is the rallying cry for every girl who competed for Ted Bundy’s affections when he was locked up on death row. After completely crushing Lola, Narcisse calls out Catherine out on her fears of intimacy and insecurity resulting from being married to a king that humped everything with a pulse and didn’t even try to hide it. Of course, Catherine is right to be insecure as Narcisse is undeniably drawn to Lola. Still, the devious duo seem to be genuinely into each other, even if they solely united by the common goal of bringing Conde down, so get it while it’s hot, Catherine.

Catherine isn’t the only one getting laid. Claude has a misguided fling with a hot young noble she thinks is her boyfriend but is totally not her boyfriend. Typical. After getting her heart crushed by the teen heartthrob, she tries to squash Leith’s relationship with Greer, but after a heartfelt soliloquy from loverboy, she gives him her diamond earrings to pawn so that he can pay off the mafia-esque Catholic Church so that he can buy an annulment for Greer. Unfortunately for him, Greer is too enthralled with her own financial independence from her growing whore empire to give up her life as a boss lady for a marriage to Leith. Love is great and all, but it doesn’t come with a retirement plan.

Someone with considerably less independence than Greer is Mary, who laments to Bash in his (blink and you miss it) appearance on how her vagina basically has a reverse Midas touch for any dude who isn’t a king. Yeah, Bash knows all about loving an unavailable queen. Fortunately, he moved on from that foolishness last season and managed to keep his head in the process. Now he ignores his wife and hangs out with witches masquerading as nuns, so yeah, things are looking up for him.

Oh, and Kenna has sex with hottie Renaude after having a hot sex dream about hottie Renaude, in case you needed proof as to why you should always follow your dreams. Good for her, someone in this damn castle needs to enjoy themselves. 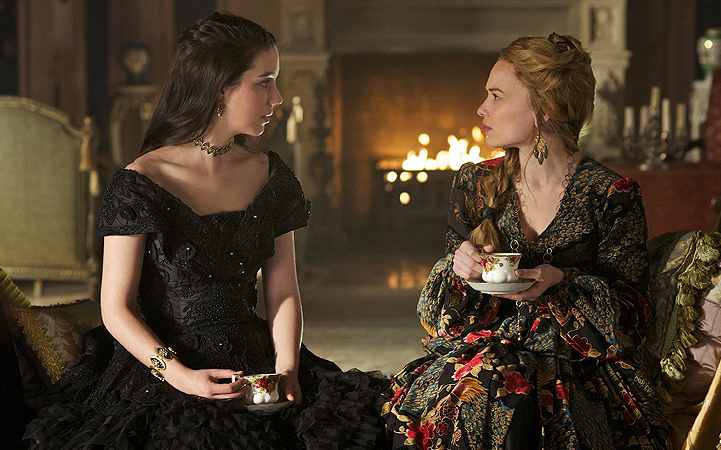