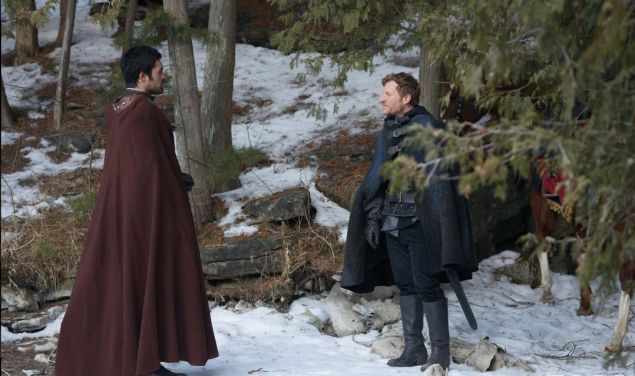 Finally, some goddamn action on this show! And by action, I mean, we get to see the wispy Francis flip a guy twice his size over the side of a castle. Which, by the way, I’m clearly willing to suspend disbelief for a lot of things on this show, including, apparently, a bloody pagan sex spell, but watching the willowy Francis toss a large man off a building? Come on, now. However, that unconvincing stunt is redeemed when a guy trying to scale the castle walls with a grappling hook gets his arm chopped clean off with a sword.

Still, I shouldn’t look a gift horse in the mouth. This show has finally recovered its momentum and the stakes are higher than ever. Now that Conde is effectively more Darth Vader than Anakin Skywalker, he manages to overthrow Renaude’s army and get him to switch sides after dangling his son, an English prisoner, in front of him. Renaude had a son? Sure. Fine. Whatever.

In about a nanosecond, Renaude drops to his knee and pledges his allegiance to Conde and his first order of business is to capture Mary, but she manages to get wise to this scheme and head back to the castle and warn Francis that Renaude flipped allegiances. Too bad Renaude and a few stray soldiers are able to  force their way into the gate. However, that means Francis and Bash get to draw swords and wreck house. Naturally, Bash is infinitely more convincing at this display of bravado than Francis, as if that’s even a question.

This whole display is a major disappointment for Kenna as she had just got done bragging to Bash that she had moved on with Renaude after seeing Bash and Delphine together. That’s gotta be mortifying when you just get done boasting to your ex about the hot ginger you’ve been banging and then he busts into the castle and tries to overthrow your ex’s brother. It’s not like Bash isn’t having his own issues with his new flame. Sure, he’s in the honeymoon phase with a new love interest with a woman with a predilection for black magic. What could possibly go wrong? It’s not like Francis’s miraculous recovery doesn’t hinge on a spell she cast or anything. Besides that,  what could possibly go wrong beyond the fact that he does the typical dude recoil after the Delphine the level 5 clinger starts vocalizing a future complete with children. Slow your roll, girl. Or don’t slow your roll and do partake in a creepy ritual involving sex with a servant and Bash’s bloody shirt.

Surprisingly enough, Delphine’s blood sugar sex magick ritual isn’t even the craziest thing a woman does for love this episode. Catherine goes full Fatal Attraction when she has Narcisse sit down for dinner only to reveal that the steak he’s enjoying is his beloved horse. That’s what he gets after a servant gets an eyeful of a fleeting but tender moment between Narcisse and Lola. All of the collective crazy at Court makes Mary’s affair with Conde seem logical and well- reasoned. And yes, that’s taking into account that their roll in the hay directly caused the castle to come under siege and put everyone at Court’s life on the line. Plus, does it not seem a bit out of character for Catherine to be more concerned with Narcisse’s affections than with the imminent fall of her son’s reign. Kind of like how Conde’s spontaneous political ambitions and effortless face to heel turns seems out of character for him. At least for Conde, that about face can be explained away by desperation and the need to survive.

As for Conde, his power grab is looking more and more imminent now that he’s coopted Renaude’s army. He tries to get Francis to agree to a suicide pact where he surrenders to Conde and then Conde marries Mary and they rule France together. In exchange, Francis gets to take a dirt nap. Obviously, Francis isn’t stoked on this proposal, but if Conde’s forces storm the castle, everyone dies. Francis has until dawn in order to make the world’s least appealing decision. When he brings the options back to Mary, she leaves to see Conde and throws a wrench in his plan by confessing to being knocked up with his kid. If she’s being honest, it’s convenient as hell. If she’s lying, it’s one hell of a Hail Mary pass, and one relied on by ex-girlfriends with borderline personality disorder for centuries. It would also be a rather devious break from her typically principled character, but if everyone else is breaking from character, why shouldn’t she? Either way, we don’t get to find out more until next week.

Oh, and there’s now sexual tension between Leith and Claude but their tender moments gets ruined by some weird, unseen cellar ghost. Cause it’s not bad enough that everyone is going to die by an invading army, but now they have to worry about cockblocking cellar ghosts. 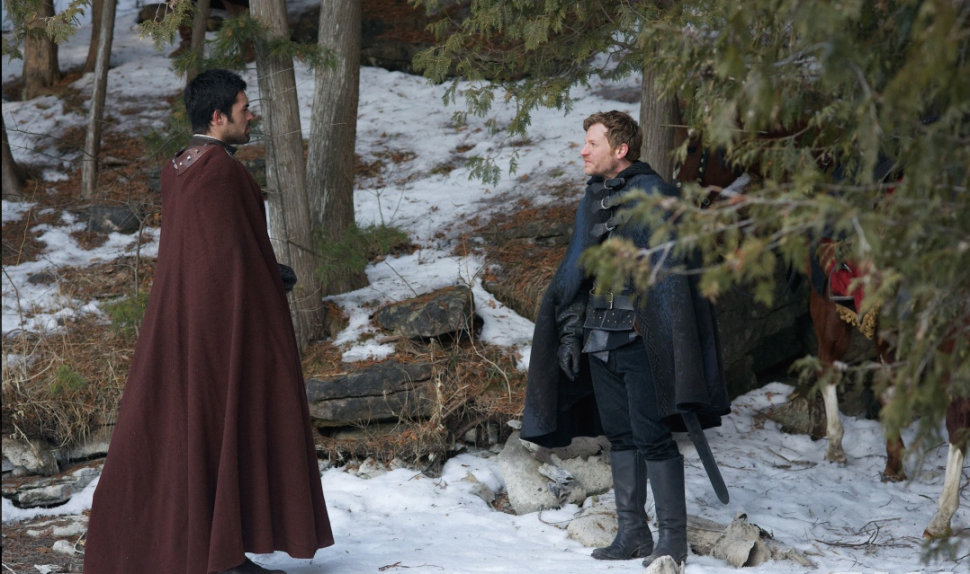