Two couples get to reconcile, and by reconcile, we mean make the sweet, sweet, network TV sanctioned love. Only one reconciliation is more short-lived than the other.

Poor knocked-up Kenna has to say goodbye to her hot ginger lover Renaude right before he faces the gallows. He leaves her with the parting words that Queen Elizabeth is going to take out her rival Mary by any means necessary, before swinging from the hangman’s noose. Of course, those aren’t the most romantic words to take into the afterlife, but there are mitigating circumstances.  Goodbye, you sexy redhead with anachronistically perfect teeth.

After watching the father of her soon to be child leave this world, Kenna makes a Hail Mary pass at reconciling with Bash and damn if it doesn’t work. Well, at least for the time being. After they get it on in a very safe for 9 pm CW time slot kind of way, Delphine ruins everything by spilling the beans about Kenna’s pregnancy to Bash after determining she’s pregnant through her magical witch powers. Of course, Bash realizes that Kenna is trying to pass off Renaude’s baby as his own and thus ends the episode’s briefest reconciliation.

It’s not like Bash is exactly falling into Delphine’s arms after the fact. At least, not after he learns of the creepy bloody shirt sex magick with the servant boy and then discovers a scenario straight off of a Mötley Crüe album cover where the poor servant is found all bloodied and dead inside of a pentagram. Shout at the devil, indeed.

Instead, Delphine is hauled away and burned at the stake. Well, they try to burn her at the stake, but as soon as the flames reach her body she just pops off of the stake and runs away. Was it that easy to get out of an execution for witchcraft? Like, you just wait for the fire to burn off the rope that burns off your hands and then run off into the woods where you presumably just go feral? Sure, Delphine is gone for now, but thanks to that binding spell, Bash feels everything she experiences. She even incepts herself into his sexy, sexy dreams. Poor Bash, he’s destined to become a scorned ex-lover’s living Voodoo doll.

As for other ill-fated lovers, Mary reveals what we already knew in that her pregnancy is a fake. Its just a ruse to win over Conde’s trust while she plies his army with Greer’s prostitutes and creates a hysteria over a totally manufactured plague. I have to say, I’m impressed. I didn’t know that Mary had that Catherine-esque graduate level scheming in her. Mary puts the deceitful cherry on the duplicitous sundae when she stabs Conde straight in the gut. He survives, of course, because surviving a stabbing before the advent of modern medicine is so commonplace. It’s almost as if internal bleeding had yet to be invented.

Conde and his bloodied abs are now the captive of French Court. Francis would live to avoid a protestant uprising by sending the Prince of the Blood back to King Antoine of Navarre in exchange for the brothers forfeiting any claim on the French throne. Catherine would rather send a swift and decisive message to any and all pretenders to the throne by having Conde’s head liberated from his body. After Francis overrules her, Catherine does the only logical thing and stages a false kidnapping and sends the message that Francis’s infant son was killed, when in fact, he is very much alive, unharmed, and being held captive by Catherine’s hired goons.

Of course, Narcisse either developed a death wish since last episode or he just DNGAF anymore, because he foils Catherine’s plan and leads Francis’s men to where Lola and her baby are being held Catherine. For her treachery, Francis then banishes his mother from Court and strips her of her income and title. Still, it’s not like she doesn’t have the de Medici largesse to fall back on, but since she’s not one to take a slight lightly, she rolls over to English court for a sit down with Queen Elizabeth, who is finally unveiled in all of her gorgeous redhaired glory. This show doesn’t close a ginger door without opening a ginger window. And this is a particularly lethal ginger window since the absolutely ruthless Catherine is teaming up with a woman that is even more bloodthirsty. Plus, it looks like Elizabeth managed to whisk Conde away from his certain death in the dungeon. Damn, Mary, when your end comes, I hope your rival doesn’t make you suffer more than is absolutely necessary.

Speaking of ends, congrats to Francis for surviving season two. Given that Mary reconciles with Francis claiming that he is the only man she ever loved, the two of them have a safe for primetime tryst that makes all the Frary-shippers go wild and change all their Twitter avatars to screenshots of this love scene, which looks like it was culled together from various romance novel covers. Personally, Mary declaring her love for Francis is probably the least convincing aspect of the episode, and that’s including a chick just jumping off of a burning stake. Just a few episodes ago, Mary was ready to run off with Conde, so this reconciliation doesn’t feel particularly earned. However, they do need to have a tender but short lived reunion given that Hot Nastradamus (!!!) shows up out of the shadows and confirms that Francis is indeed dying. Where have you been all season, Hot Nas? One thousand Delphines couldn’t equal your sexy ass.

Those and other questions will be answered next season as the show throws some focus over to English Court and is sent to convalesce on a Friday night time slot. Plus, maybe we’ll finally get to see Lola and Narcisse take the filthiest bath that network TV will allow. 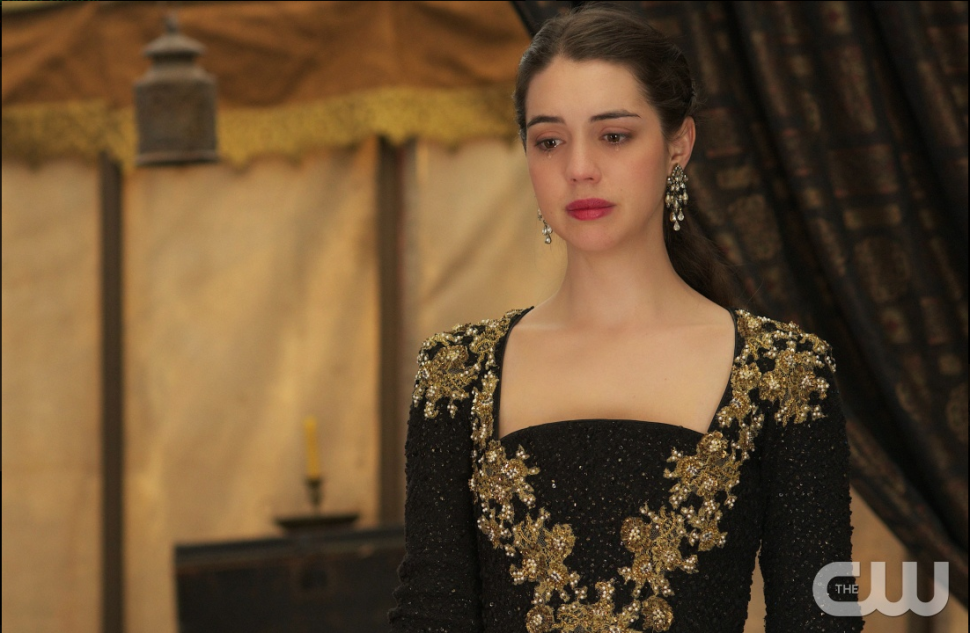