“I encourage Senator Lanza to look closely at the race. I worked closely with him for years, I know what a great prosecutor he was in the legendary [Manhattan] District Attorney [Robert] Morgenthau’s office, and I know his love for the law, and he would be, by far he would be a great asset to the borough and its crime fighting initiatives,” City Councilman Vincent Ignizio told the Observer today.

While Gov. Andrew Cuomo has the option to appoint a district attorney to fill the vacancy, Mr. Donovan’s term was set to end this year—meaning appointment or not, voters will select a new district attorney at the polls in November. Mr. Donovan has been DA for 12 years but won a special election to fill a vacant Congressional seat on Tuesday, and his jump to Congress leaves those who want to replace him with a tight timeline for a November bid.

On the Republican side, Mr. Lanza’s name has emerged as a clear favorite. A former assistant district attorney in Manhattan and former city councilman, he routinely scores big re-election victories and is popular across the Island.

But he said it will be a tough decision for Mr. Lanza, who enjoys his job in Albany and has gained respect there.

It’s unclear whether the current upheaval in the State Senate, where GOP Senate Leader Dean Skelos is facing pressure to step down from his leadership post after criminal charges, will make running for a different office more attractive to Mr. Lanza.

But Mr. Oddo said anyone who had worked for a top prosecutor must have imagined what it would be like to be one.

“To be the DA of his home community, where he’s raising his three kids, where he’s born and raised, it’s a really compelling job for him,” he said. “But he has to weigh the enjoyment he has now against something he’s, I think he’s always in back of his mind, aspired to.”

“We really have to wait and see what the governor is going to do. He’s the one who is going to decide and make the decision, he’s the final say,” Mr. Antoniello said.

Mr. Lanza did not return a phone call seeking comment. But if he runs, it will would likely pave the way for several Island GOP pols to move up the ranks. Republican Assemblymembers Joseph Borelli or Nicole Malliotakis would likely be waiting in the wings for Mr. Lanza’s Senate seat, which is extremely likely to stay in GOP hands. In turn, it would free up one of their Assembly seats, also likely to remain Republican, for a newcomer.

On the Democratic side, several names are floating around. Matthew Smalls, a Staten Island lawyer, said months ago that he would run, in the wake of the Eric Garner case—in which a grand jury impaneled by Mr. Donovan opted not to indict a white police officer in the unarmed black man’s death.

Former Congressman Michael McMahon is also looking at running for DA, a source close to Mr. McMahon told the Observer.

Also being named are Surrogate’s Court Judge Robert Gigante, Criminal Court Judge Mario Mattei, who as sitting judges would not comment to the Staten Island Advance when asked about the race.

But one Staten Island Democratic source told the Observer that the candidate would depend on whether Mr. Cuomo, a Democrat, opts to appoint a district attorney—likely a fellow Democrat—to keep the seat warm ahead of November, rather than allowing for the office’s top-ranked prosecutor to serve as acting DA.

“The big question is do they run without being appointed?” the source asked.

As for Mr. Smalls, who is already in the race, the source questioned whether his message about Garner could resonate across the borough that just elected the prosecutor in that case.

“The entire political leadership in the minority community worked to defeat Donovan and they had no noticeable effect on the results,” the source said. “Also, [Smalls has] been running for months now and there doesn’t seem to be that fire in the belly.”

A spokesman for Staten Island Democratic Party head John Gulino said they wouldn’t comment about potential candidates—or about whether Mr. Cuomo should appoint a district attorney.

Mr. Cuomo himself said he was not sure how he would proceed.

“I have to look at the law and what the vacancies are. I tell you the truth: I don’t know,” Mr. Cuomo told the Observer after an unrelated press conference today.

The situation is not without recent precedent. Nassau County District Attorney Kathleen Rice won a Congressional bid in 2014. Mr. Cuomo did not appoint anyone to become district attorney; the role of acting district attorney is being filled by her former second-in-command, Madeline Singas—despite there being considerably more time left in the term Ms. Rice vacated.

If Mr. Cuomo leaves the Staten Island DA position unfilled, the role of acting district attorney would fall to the office’s top prosecutor, Dan Master, until the end of the year. With Democrats most likely to benefit from an appointment, it was perhaps unsurprising that Republican elected officials were just fine with letting Mr. Master run the show ahead of the November election.

“I hope the governor appoints a caretaker DA, or allows the chief assistant to run the office while Staten Islanders decide who they want the DA to be, and not anyone else,” Mr. Ignizio said.

Republican Borough President James Oddo, too, said Mr. Master would do a good job serving out the term.

Mr. Antoniello, the GOP chair, said he didn’t have much of an opinion the matter.

“It’s out of my hands, so I really have no control over that,” he said. 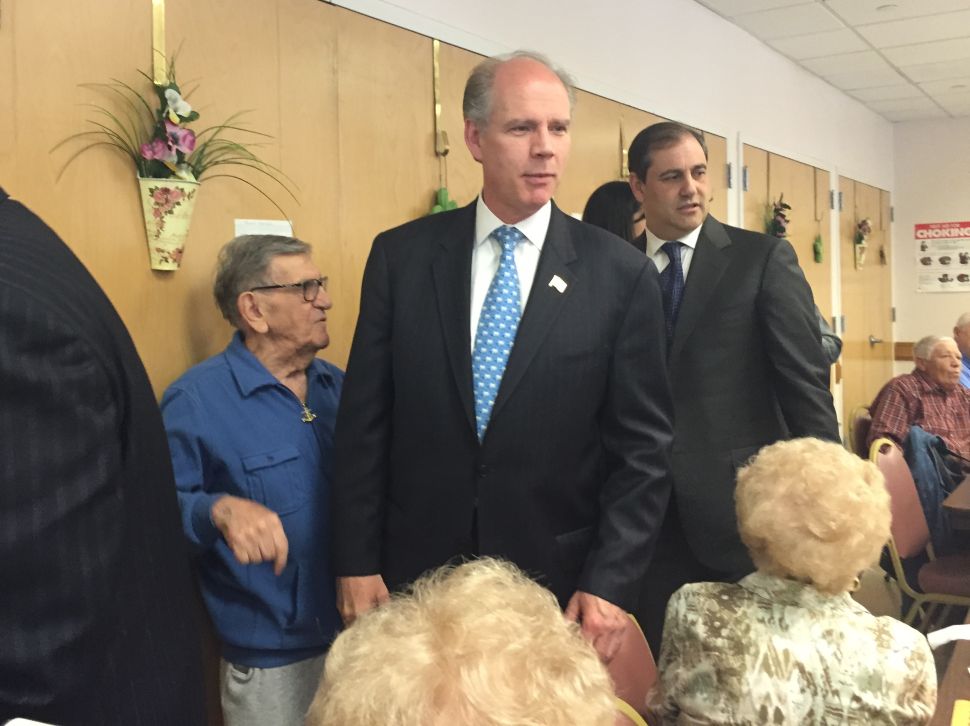