The last movie I saw by writer-director Andrew Bujalski was a bomb about computer chess. Defying all predictions to the contrary, he has now made another one. Results pretends to be a satire of fitness culture, which as we all know is more of a fitness obsession. But it is really not about anything at all except the mistakes, pitfalls and dumb decisions that plague the career of talented but misguided Australian actor Guy Pearce in his attempts to become an American film star. A week in the outback without a cellphone would be better than Results.

As Trevor, the owner of a gym in Austin, Texas, called the Power 4 Life, Mr. Pearce may be planets away from the endearing drag queen he played in Priscilla, Queen of the Desert, but no less dysfunctional. He once had a hot affair with a rough, mean-spirited trainer named Kat (Cobie Smulders) but seems extremely uncertain and indifferent about women. Into their torture factory comes Danny (Kevin Corrigan), a rich, pot smoking physical wreck, out of shape and a stranger to exercise, who bites the bullet and signs up with Kat for an expensive two-year fitness program so strict it includes taking photos of everything he swallows except .

Under the prison-warden control of Kat, Danny is soon breaking all the rules and wolfing down beer and pizza behind her back. But for reasons known only to director Bujalski, who also wrote the deadly, incomprehensible screenplay, Kat is soon offering to do the hump-backed pound-town position with Danny’s potbelly and then dumping him. When Danny falls for Kat’s sadistic attitude toward his money and his pudding thighs, he woos her with a candlelit dinner and a jazz trio, which makes Trevor see red because he’s secretly in love with her himself. After he fires her, she devotes her time to trying to get him back in the sack, but he’s as pathetic as the dorky losers who seek his help. He’s home alone every night, too.

Nothing ever happens after that. A lot of meaningless palaver does expose the freak world of lunatic cave man diets, empty platitudes about carbs, nauseating recipes and abusive workout routines, but none of the fragments add up to a satisfying whole. An ode to the art of boring an audience unconscious, the script for Results is so loose you couldn’t stick the pages together with Elmer’s glue. The movie has no pace, no rhythm and no sense of style. The characters are so underwritten and unexplored that even the actors have a hard time staying awake.

Some of them don’t even try. Mumbling stumblebum Giovanni Ribisi, one of the worst actors of all time, is generously over-exposed, playing one entire scene with a mouth full of food with such self-indulgence you can’t understand a single word he says. You can always understand Guy Pearce, even when he reverts to his native Aussie accent, but what he says is demented. The dialogue goes like this: “You know optimal, and you know sub-optimal, and clearly I am sub-optimal to you … not to mention inappropriate.” It sounds like English, but might as well be Swahili. Rarely have I seen so many screwy people on the same screen making so little sense. Guy Pearce tries, but he can’t carry the movie by himself.

Results has no purpose, no humor and no payoff. It’s a celluloid dog that should have bypassed the screen and headed straight for a kennel. 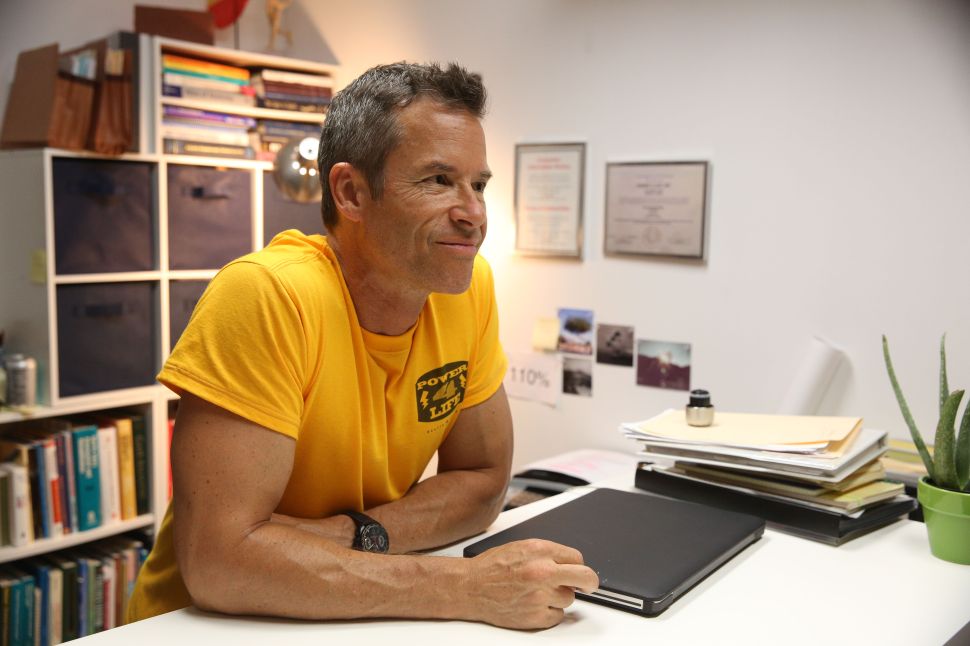