8:30 a.m.: Through small windows with dark wood panes the slanted morning sun hits the Flatiron building across Madison Square Park. Inside the Clock Tower, chef Jason Atherton’s new restaurant, Françoise Hardy warbles over hidden speakers in an empty dining room whose tables are set heavily for breakfast. A lanky waiter in a crisp white shirt and black vest uses a small towel to polish the chair backs to a high sheen. The restaurant, a suite of five handsome mahogany wainscoted rooms on the second floor of the old MetLife building, has the particularly sweet charm of a nocturnal space in the morning. By night, says Robert Kihlstrom, the general manager, Credit Suisse men blow off steam after work, and later, as night becomes morning, a downtown set moves in, all side-eye and underboob.

Once the rooms were the offices of chairman Stiegmann, who ran the Metropolitan Life Insurance Company when the Italianate building was constructed. But since last Saturday, they comprise the New York outpost of Mr. Atherton, who has a stable of successful restaurants in the U.K. and beyond, including one called Berners Tavern in the London Edition that is nearly identical to this one. Mr. Atherton has partnered with Stephen Starr, who has a stable of successful restaurants on the Eastern Seaboard, and now again with boutique hotelier Ian Schrager, whose New York Edition hotel opened this weekend in the same building.

8:45 a.m.: Breakfast menus have rarely been loci of innovation. I note with a mote of sadness that Mr. Atherton’s offerings are no exception. Why is man not up to challenge his own tastes first thing? The menu, however, is pleasing with anglophilic touches such as black pudding. What standards there are are delivered with gusto and fidelity, like the Nina Simone rendition of “The More I See You” that fills the room. Hazelnut waffles ($17), which arrive cooked to dark gold, are rightly fluffy with the requisite touch of savory. A small bowl of sweetened hand-whipped cream and sundry berries accompany the dish. It’s a good carb-y reveille, but the avocado toast with poached eggs ($16) is better. The sourdough peasant bread adds structure and discipline to the generous avocado mush. The eggs are well poached and the potatoes are thick fried slabs with crystalline interiors and impressive outer crunch.

Each of the five rooms has been given a color name (inspired by Vermeer, I learn) and a photographic theme. I am in the Rose Room. As I gaze at the walls where hundreds of framed photographs of New York street scenes hang, I wonder what the Bronx residents of way back would think of New York now. Bored, I suppose, and a little envious.

9:08 a.m.; I am joined by a middle-aged woman reading The New York Times who takes an interest in where each server is from. “I was born in a suburb of Rome,” says one, the seat polisher, “but grew up in East New York.” The rest seem drawn from Stephen Starr’s many restaurants. All are very well trained.

10:00 a.m.: As a young man in New York City, I fantasized about living in the glass-enclosed golden crown atop this building. I imagined it as an aerial womb. Why was it never on Craigslist? Today, the fire safety marshal of the building escorts me to the 43rd floor, where we take increasingly narrow stairways upwards. The upper floors are in rough shape and house the phone system and the gravity tank. The walls are still scrawled with the obscene graffiti construction workers favor. (“The general does it like a monkey on a horse!”) After the final flight of stairs, we open a door out onto a stunning view obscured by a large iron bell. “Meneeley Bell Co. Troy, N.Y. 1908,” it reads. Beyond us the 60-story tower offers full views of its seemingly unpeopled apartments. Rupert Murdoch lives in one, and briefly, I hope to see him bathing in a corner bathtub. Amazing what people expose when they think no one is watching.

11:16 a.m.: As breakfast slowly moves to lunch, the soundtrack goes from brassy numbers toward a mixture of classic rock and lounge. Led Zeppelin’s “Hey Hey What Can I Do?” and Levek’s wah-wah-heavy “Look On the Bright Side.” (The playlist was curated by DJ du jour Chelsea Leyland.)

11:48 a.m.: There’s a beautiful purple felt pool table in the Billiard Room. Photographs of musicians crowd the walls: Mick Jagger, Sade, a young Debbie Harry. Now there is a baby, no more than five months, crawling around on the table. His mother idly watches. He’s cute, but not from the felt’s point of view.

11:57 a.m.: Still sparsely populated but pleasant at lunch. Not on the menu but by far the most transcendent thing to occur is the arrival of a steaming round loaf of fresh sourdough, already quartered. Beside it, on a miniature cutting board, is whipped butter made with buttermilk, which melts on contact with the bread. Unlike many American restaurants, it seems the European custom of bread baked in-house is alive and well here. And thank God.

12:01 p.m.: The bells used to chime Handel every 15 minutes but they stopped. Perhaps they should toll once again for the vegetarian entrées at the Clock Tower. Of the 26 menu items, only three don’t contain chunks of meat, and those are the salads.

In another quiet triumph, this time unmarred by meat, Mr. Atherton rings a discus of Brooklyn-made Lioni burrata with a handful of skinned cherry tomatoes, studded with clear tomato gelée, nearly transparent slices of radish, flowers and dark green crystals of basil granita. The salad ($15) is respectful of the ingredients, parsimonious, elegant and delicious. Those are Mr. Atherton’s chief virtues, not innovation but fidelity, not whimsy but craft.

There is much more to commend this approach than damn it. Still, if he could but embrace the new wonderful tilt to veggie-forwardness as warmly as he does the traditional proteins, the Clock Tower would strike not just in eulogy but in future address.

12:15 p.m.: Time to start drinking. It’s early still so I opt for the American Cereal Killer, one of the cocktails by Gareth Evans, Mr. Atherton’s own bar captain, which reprises a well-known item from his Blind Pig in London. Here it is boozed up with bourbon and served in an all-glass milk carton. It is, of course, terrifically sweet and goes down easy.

12:20 p.m.: Break for a game of billiards with my friend Daniel, which I win after he scratches his final shot.

1 p.m.-4:30 p.m.: A long period of Googling people I used to know sitting in the downstairs lobby while drinking a rather nice cocktail, the Manhattan Manhattan (like a Manhattan, with absinthe!) at the downstairs bar, looked after by Matthew Charles, a smooth-talking Welshman who wears a Panerai and a pajama shirt under a blazer.

6:30 p.m.: The Gold Bar (walls hung with artists) is filling up. The waitress gives me a house soda made with pea and mint cordial. Others are drinking a cocktail called Gap Year, which comes with glow sticks, a temporary tattoo (non-toxic but inedible) and a friendship bracelet. They glow ridiculously in the night. My mother-in-law arrives.

8:30 p.m.: The room is somehow less lovely at night. With the blinds closed it could be any vaguely boys club-like restaurant. Our waiter hard sells the Dover sole but my mother-in-law wants steak. Mr. Atherton offers a 40-day dry-aged cote de bouef ($125). It comes with a tower of black truffle haricots verts and cubes of foie gras, potato gratin and a gravy boat of bordelaise sauce with chunks of bone marrow floating like fatty ice floes. I opt instead for the mac and cheese ($23), another reprise of a Berners Tavern favorite: thick béchamel covered paccheri topped with roast mushrooms and flakes of parmesan. (On the menu, it is offered with ox cheek, too.) The beef finds glory in death, deliciousness in its execution. Mother-in-law says I’m a good son. That mac, that cheese, well, New York doesn’t need another riff on comfort food but it does need this one. Reasonable in portion but rich in character.

The bells, could they strike, now would for me. The Clock Tower, like the light at Sandover, is changing, changes by the hour. I’d seen most of its faces and liked them all. Mr. Atherton isn’t going to make a splash here in New York City, but I don’t think that’s his aim. He’s no cannonballer. Though handsome, The Clock Tower is his dive: gracefully done, flawlessly executed and sharp as a knife. 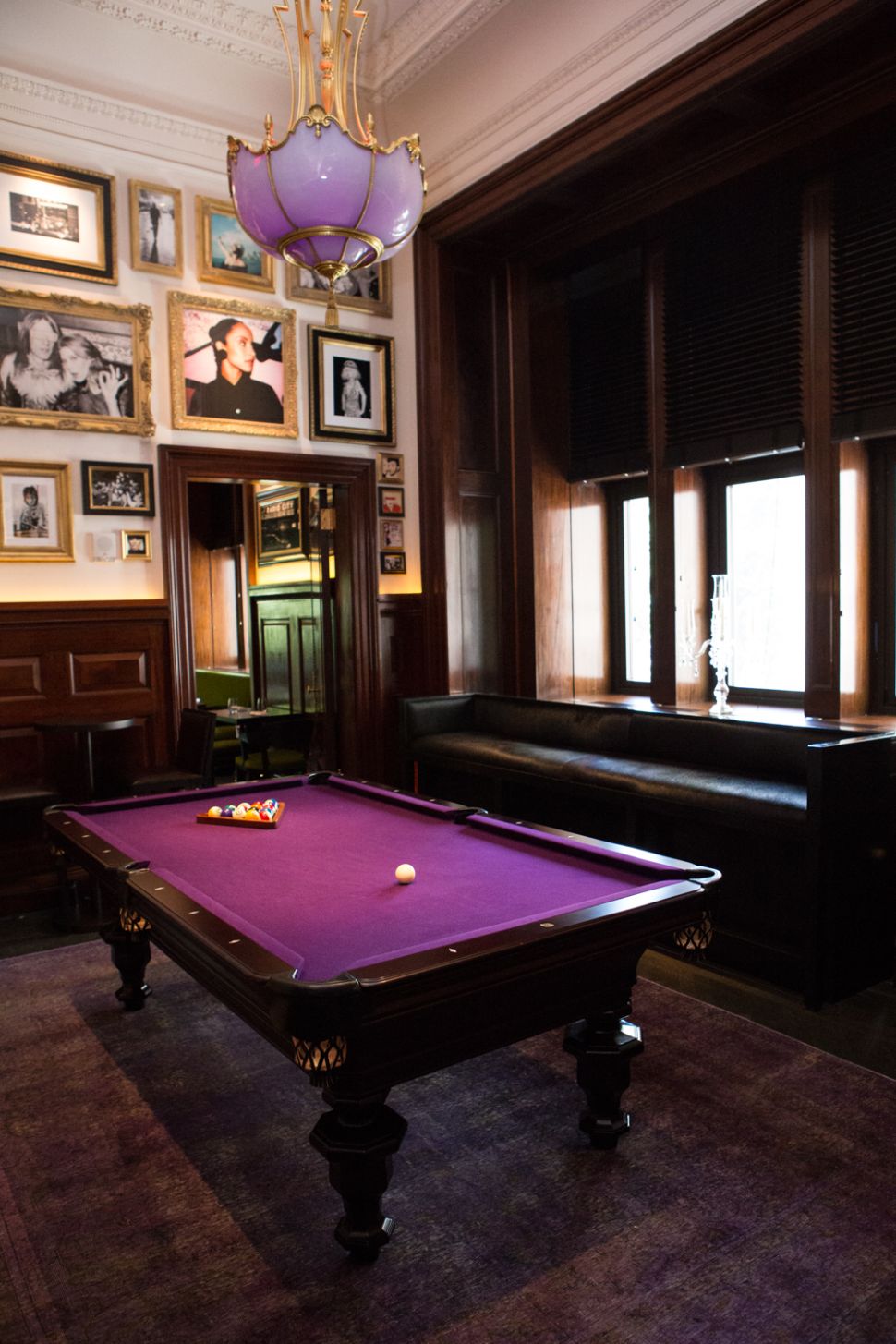