On Sunday, Robert Rodriguez, who’s helmed such cutting edge films as El mariachi, From Dusk to Dawn, and Sin City, sits down with visionary writer/director Robert Zemeckis, who’s films include Romancing the Stone, Who Framed Roger Rabbit, the Back to the Future trilogy, Best Picture Oscar® winner Forrest Gump, Cast Away, The Polar Express and the upcoming film, The Walk.

In addition to being a noteworthy director, Rodriquez is also the Founder and Chairman of his own television network, the El Rey Network, a new 24-hour English language channel curated by Rodriguez and his artistic collective. The network features diverse programming anchored by original signature dramas, feature films, grindhouse genre, cult classic action, and horror/sci-fi.

El Rey Network Presents: The Director’s Chair is a series of hour-long specials featuring the industry’s most cutting edge directors as they engage in a revealing and unexpected exchange about the world of filmmaking. The series provides access to one-on-one interviews between Rodriguez and some of cinema’s most iconic filmmakers. Past guests have included John Carpenter, Francis Ford Coppola, Guillermo del Toro, and Quentin Tarantino.

Throughout his career, Zemeckis, a the tech-savvy auteur, has also been a pioneer in special effects-driven filmmaking, pushing the medium forward with each film by utilizing the latest in groundbreaking digital technologies, including early, breakthrough CGI in hits like Death Becomes Her and Contact and performance motion capture animation in The Polar Express and A Christmas Carol.

During this chat, Rodriguez, who clearly knows how to pull an interview subject in, carefully assists Zemeckis in opening up about various stages of his prolific career, Rodriguez asks just the right questions, prompting Zemeckis to reveal detailed accounts  of not only his triumphs but his setbacks as well.

Discussing his early influences, Zemeckis lists an unlikely actor as having provided the gateway into his chosen career. This is just one of the hidden gems that Zemeckis admits to, with others that include the toughest movie he’s ever made and what he learned from the process, his secret to working with actors, and how his continuing collaboration Steven Spielberg first began.

Speaking specifically about the box office hit, and critically acclaimed, Back to the Future, Zemeckis talks about what he calls a ‘horrible decision’ that he had to make during production that could have caused that the whole project to go under. He also reveals the now famous scene that he almost omitted from the final cut of the film and how a fight resulted in a re-write that changed the entire ending of the film

He also discloses how an earthquake nearly destroyed the set of an iconic scene before production was complete, something he did on a film that he admits was ‘absolutely self-indulgent,’ and which of his films gave him ‘waves of terror.’

The entire hour is a reminder of why Zemeckis has risen to the elevated stature that he so deserves. In closing, he offers advice, and some hope as well, for all filmmakers, no matter what their current status within, or outside of, the entertainment industry.

One note of caution, If you’re easily offended by a bit of vulgarity, then skip the last few minutes of the episode, but if you truly want to hear Zemeckis’ real feelings about being a filmmaker boiled down to one sentence, then stay with it. Aside from the rather extreme frankness of it, the expression he uses is both funny and extremely accurate.

Rest assured, casual movie fans, you don’t have to be a super film buff to enjoy the conversation on this episode of The Director’s Chair, or on any episode for that matter. If you’re someone who simply enjoys watching films, this is still an hour that’s well worth your time.

And, yes, seemingly for authenticity’s sake, the two auteurs do actually sit in director’s chairs throughout the interview.

This installment of “El Rey Network Presents: The Director’s Chair,” premieres on Sunday, May 31st at 8pm et. 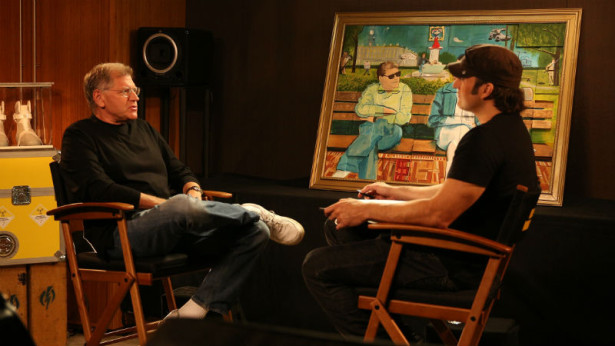