Vermont Senator Bernie Sanders’ entry into the Democratic race for President is a good thing. It is good for the country, it may be good for Hillary Clinton, and surprisingly, it might be good for the party – the Republican party.

No political pundit is giving the rumpled, outspoken, admittedly socialist the slightest chance of winning the nomination. But Senator Dick Durban, the second-highest ranking Democrat in the Senate and Barack Obama’s mentor thinks Senator Sanders will “be a force” in the primaries.

Senator Sanders’ impact is already being felt: in an obvious attempt to appeal to left-wing Democrats, Ms. Clinton has repudiated her husband’s trade policies and called for significant changes in the criminal justice system Whether Ms. Clinton continues to move left is yet to be seen. But what is clear is that Mr. Sanders is intent on hitting hard on the influence of money in politics. And Ms. Clinton will be under far more pressure from the left to adequately answer questions about the Clinton Foundation’s fundraising, expectations of access and outright favors.

Former President Clinton’s answers to questions about the Foundation’s foreign fundraising was reminiscent of his parsing of the verb “was.” “There is no doubt in my mind that we have never done anything knowingly inappropriate in terms of taking money to influence any kind of American government policy,” he said in an interview that aired Monday on NBC’s “Today” show. “That just hasn’t happened.”

But then he compounded his wife’s problems with a tone-deaf dismissal:”I gotta pay our bills,” he said.

Sanders is the longest-serving independent in the Congress’ history. He spent 16 years in the House before being elected to the Senate in 2006, and has long been a fierce critic of a campaign finance system that allows “billionaires” to “buy elections and candidates.” He is too smart to accept double-talk, too battle-hardened to be diverted by glib explanations, and too resourceful to allow red-meat issues to escape.

Ms. Clinton, to be sure, is no political neophyte. She has undoubtedly studied the most successful example of “inoculation theory” in modern political history: Barack Obama’s 2008 campaign, which included his effective stump speech, “They’re trying to make you afraid of me.” Senator Sanders’ early criticism of the Clinton Foundation fundraising could prompt Ms. Clinton to devise her own inoculation strategy, and deprive both Sanders and the Republicans one of their most effective angles of attack.

The most surprising impact of the Sanders candidacy may be an enhanced opportunity for Republicans. Mr. Sanders will certainly keep pounding his core message:

“How does it happen that the top 1 percent owns almost as much wealth as the bottom 90 percent? And my conclusion is that that type of economics is not only immoral, it’s not only wrong, it is unsustainable.”

How Ms. Clinton responds to Sanders’ key theme will determine the size of the Republican opportunity. If she echoes his populist cry protecting her left flank in order to  attract the party’s activists (and perhaps money,) the GOP prospect expands. If she limits the inequality rhetoric and instead champions greater economic opportunity and a level playing field for all Americans, Ms. Clinton could co-opt a major Republican theme.

Suddenly, because of Mr. Sanders’ entrance, Ms. Clinton has to make the same calculus that has long plagued Republicans: does she play to the more ideological activists who dominate the primaries? Or does she hold back knowing that every successful candidate must attract moderates in the general election? For it is still the center where general elections are still won or lost. 42% of Americans still identify themselves as independents.

Bernie Sanders is likely to force the issue. We should thank him for making it a more interesting race already.

Steve Cohen is an attorney at KDLM in New York. He was a member of Ronald Reagan’s 1980 national campaign advertising team. 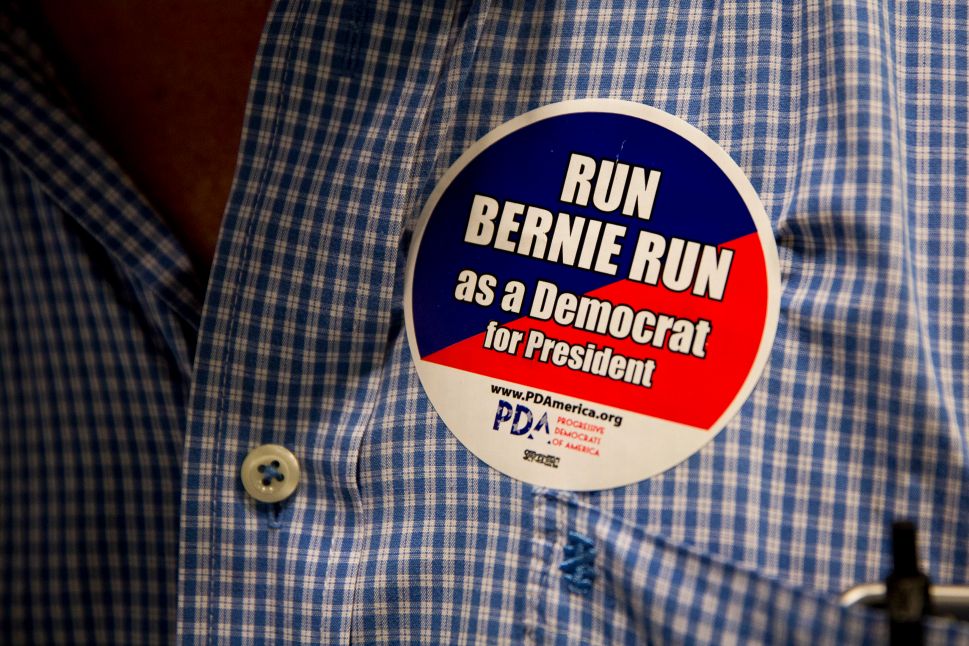