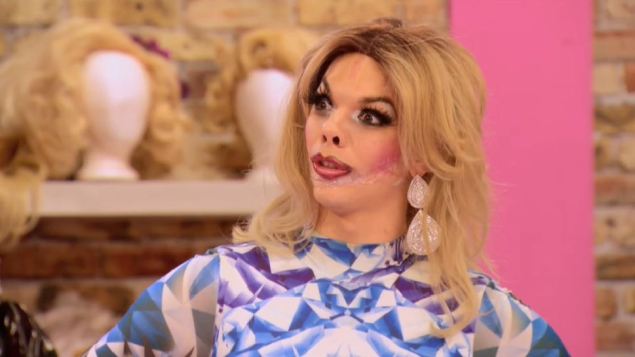 This was a very strange Drag Race. (photo: Logo TV)

Drag Race is ostensibly a show about men in dresses and full face performing comedy and delivering fashion. Still, some episodes are a lot more straightforward and normal than others. This episode was not one of them. This is one of the weird ones, not unlike the Season 5 episode where the queens were all in self-made parade floats.

The mini-challenge has the queens tasked with using Scotch tape to pull back their faces to replicate extreme plastic surgery. Unfortunately Miss Fame sashayed away last week, or she would have had this one in the bag. Then the cast must shoots a fake intro sequence for a Real Housewives parody. It’s not clear whether the queens wrote their own lines for the bit, but all were hilarious. (Pearl: “Some people call me a slut, but I’m also an alcoholic.”)

Violet wins this one, and the scary part is that she actually looked like an overworked woman instead of just someone with tape slathered all over her face. The main challenge is a dancing competition, and Violet is given the privilege of pairing off the queens into teams. She wisely grabs Katya for herself, pairing Pearl with Kennedy and Ginger with Trixie. What goes unmentioned is that Violet chose not to be shady. If she had paired off the non-dancers, Pearl and Ginger, then surely one of those two frontrunners would be going home.

With only six queens remaining, it must be awfully nervewracking for all those left. The fact that the main challenge is one of the hardest the show has ever seen can’t help the situation. The pairs must perform in split drag, with one half of their body male and the other female. Then they must do a dance number with their partner that’s a mix of two completely different dance styles. The Charleston/Twerk? I don’t know how anyone is supposed to learn how to do that within the scarce amount of time they’re given.

The teams are choreographed by Kym Johnson from Dancing with the Stars. What the show doesn’t make plain is that the DWTS dancers have one skill that many choreographers don’t: they’re used to sizing up people who have never danced before and to constructing routines around them, their skills and their weaknesses. Since each pair had at least one dancer, that makes things a lot easier for Kym. She can give the hard parts to the dancer while the other performer does background stuff.

The rehearsals go exactly as expected. Pearl—who is so white that her name is a synonym for white—can’t seem to get a handle on twerking. Violet seems to have trouble with one simple step but otherwise she and Katya appear to have a good chemistry. It definitely helps matters that half of their dance is voguing, which is Drag 101. Ginger, meanwhile, is absolutely terrified and with good reason. “I’m afraid I’m going to look like Honey Boo Boo meets Rosie O’Donnell!” Dancing is not something you can pick up in forty-eight hours (if that).

The runway this week continues to be bizarre, as the half tuxedo/half dance outfits look nuts as it is, but their half man/half woman faces look even weirder. The idea must have come from photographer Leland Bobbé’s work (Miss Fame is first in the linked gallery). What’s cute is how so many of the queens had the need to butch up their male sides with makeup as well.

The dance performances themselves were hardly spectacular, but given the amount of preparation the teams had it’s a small miracle that they put anything together. Pearl and Kennedy weren’t particularly tight but at least gave off an air of having fun and giving it the old college try. Katya and Violet nailed theirs, and Ginger and Trixie were the weakest but hardly made spectacles of themselves. If this were earlier in the season they easily would have been safe.

The teams are judged in pairs and not individually, which is a bit unfair. But of course this only adds to the drama, where the dance partners must lip sync against each other like in Season 4—only this time there’s no one to throw up and render the elimination moot. It’s Violet and Katya for the well-deserved win this week, with Ginger lip syncing against Trixie.

The decision by Ru might be the most absurd since Milk was forced to lip sync instead of Darienne in the rap challenge. The editors force a shot of RuPaul giving a huge laugh as Ginger tries for funny again, but there’s no way to look at the lip sync and doubt that Trixie mopped the floor with her. Though Violet had a good point that Trixie needed to be looked at much harsher since she got to come back after being eliminated, Stevie Wonder could see that she won this one. Unfortunately in this case a decision was made earlier at some point, and Ms. Mattel is sent back to her shelf. 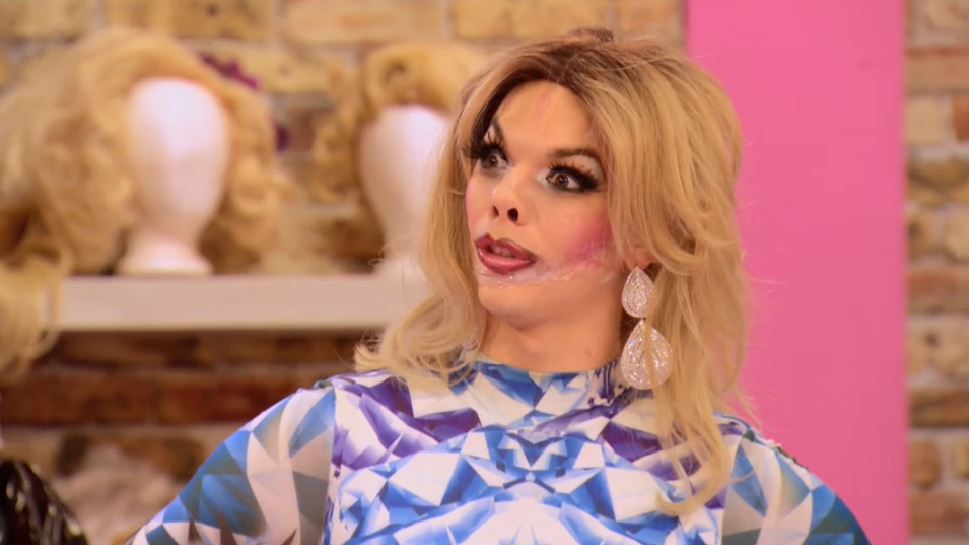