The lawmakers, led by Senate Steve Sweeney (D-3) and including Majority Leader Loretta Weinberg (D-37), Budget Chairman Paul Sarlo, President Pro Tem Nia H. Gill (D-34), and Sen. Bob Gordon (D-38), argued in a statement that the time has come for the Port Authority to take up the upgrades, neither of which are funded in the bi-state agencies current 10-year capital plan. They cited commuter rail and bus systems running at maximum capacity, daily backups at bridges and tunnels, and a projected doubling of ridership demand by 2040 in the state as evidence that the state’s transportation issues are piling up.

“New Jerseyans make up almost 80 percent of trans-Hudson commuters, pay the lion’s share of the tolls, and bear the brunt of the failure to invest in expanding and modernizing our trans-Hudson infrastructure,” Sweeney said. “We need to get moving on the Gateway rail tunnel and Port Authority Bus Terminal now to create good-paying jobs, bolster the middle class, spur economic growth and improve the quality of our commuters’ lives.”

It’s the latest push by Democrats — but particularly Sweeney — to draw attention to improving and upgrading transportation infrastructure across the state as both a matter of necessity but also politics. As the senate leader continues to gear up for a potential gubernatorial run in 2017, he’s made strengthening the state’s economic footing something of a priority, traveling to sites like New Brunswick, where a private-public partnership is spearheading construction on new business and residential projects, as well as the Port of Newark, one of the state’s busiest shipping centers, to make his case.

In an interview with PolitickerNJ recently, Sweeney said the state’s aging transportation infrastructure — which also faces uncertainty in terms of financial support, with a longterm funding solution for its Transportation Trust Fund still absent — represents the area of the economy where inaction will have the most dire consequences.

Sweeney also called for the construction of a new trans-Hudson rail tunnel late last year, arguing that impending closures of existing tunnels for repair could cripple the region’s transportation network.

“It’s the bridges. It’s the tunnels. It’s the roads, the ports,” Sweeney told PolitickerNJ earlier this month. “Because you can lose economic growth in all those places.”

The group further urged the Port Authority today to use the billions of dollars it plans to generate from its sale of non-transportation-related real estate, as well as other capital funds, to provide a $3 billion regional match for the new Gateway Tunnel and to fully fund the reconstruction and expansion of the dilapidated bus terminal.

“New Jersey commuters have been hammered by the staggering bridge and tunnel toll increases rammed through so underhandedly in 2011,” Weinberg said. “They have been paying more than their fair share, but New Jersey’s priorities have taken a back seat. We need to expand trans-Hudson capacity to cut commute times for our rail, bus and auto commuters, spur economic growth on both sides of the Hudson, and not allow real estate development and other less-critical projects in the Port Authority capital plan to take precedence.”

“The core mission of the port authority should be dedicated to transportation projects that benefit the commuters of our state,” Gill said. “Expanding trans-Hudson capacity is critical and should be done by building the rail tunnel and expanding the bus terminal. These projects can no longer wait.” 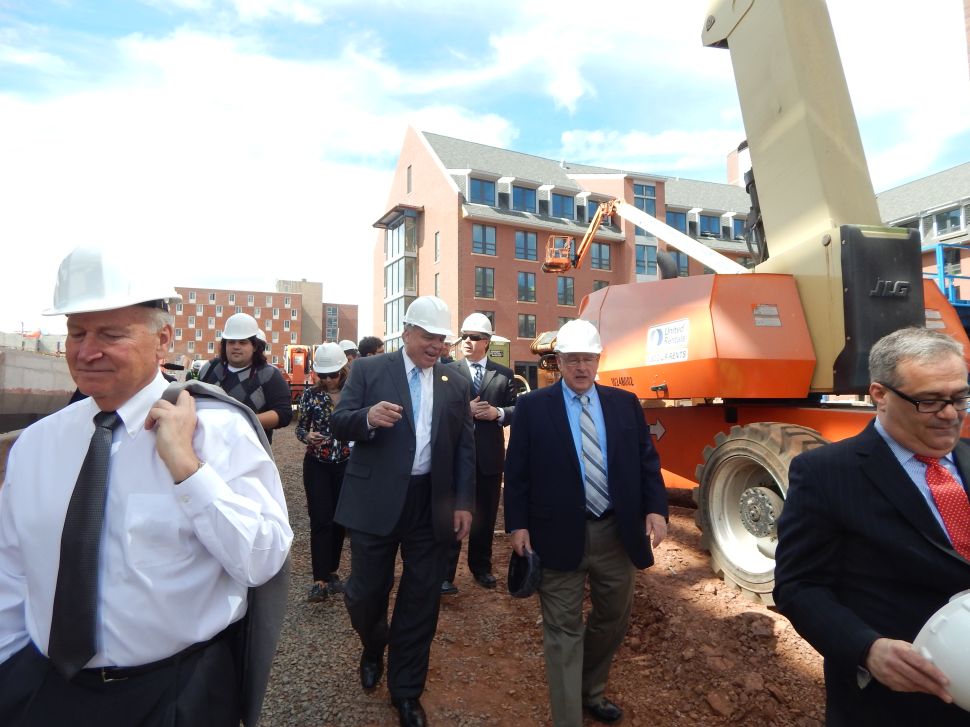