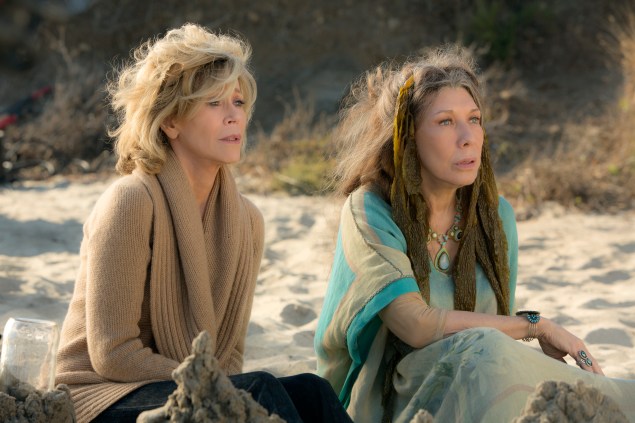 Your enjoyment of Grace and Frankie, the Netflix comedy about two women who forge a friendship when their husbands leave them for each other, will be directly related to how much you’d like to see Lily Tomlin and Jane Fonda tripping out on Peyote. If you’re on board with Tomlin, seaweed actually kind of working as a hair extension, having the world in her tears examined by a loopy Fonda, then the quirky little comedy should provide just the right filler while you wait for Orange Is the New Black.

The pilot can be a little heavy handed in its drawing of Frankie (Tomlin) and Grace (Fonda) as polar opposites who can barely stand to share a dinner together. If Frankie’s flowing wraps and hair aren’t enough to signal she’s an aging hippy, the revelation less than ten minutes in that she considers herself a physic will. And Grace is an equally sharp caricature of an aging wasp.

What’s interesting is how different their relationships with their husbands are, and how that plays out in the aftermath of their coming out. Cold, appearance driven Grace admits to her husband Robert (Martin Sheen) that his death would have been a more welcome disruption to her life, while Frankie banishes Sol (Sam Waterston) to the couch only to end up joining him because she can’t remember sleeping without him. The difference in the marriages is echoed again and again in Grace’s anger and Frankie’s sadness, as well as Sol’s guilt and Robert’s nonchalance. It quickly makes Frankie, and to a lesser extent Sol, the more sympathetic characters, with Grace and Robert’s likability growing as their relationships, platonic and romantic, respectively, with Frankie and Sol grow.

Almost all of the show’s “gay jokes” fall flat, from a crude, graphic jab from Grace’s daughter to Frankie’s supermarket musing about whether Ben and Jerry were “more than ice cream buddies.” The smartest way late in life coming out is handled is when the writers pit Frankie’s inclination to be supportive and tolerant with her need to lash out at someone who has betrayed her. The best moment of the pilot is when Grace is trying to goad her into anger over Sol’s abandonment and Frankie replies with what seems to be canned liberal answers. He kept it from her because he couldn’t face this truth about himself, he didn’t do it to hurt her, but for him. But when she breaks down so does the rhetoric, and she’s just a soon to be divorcee who already misses her husband.

The only running joke at the premise that consistently works is all four character’s habit of referring to Sol and Robert not as gay but as, formally, homosexuals. It works because it plays into another source of humor-their age. So many sitcoms use aging characters as a source of unrealistic technology gags (not even your grandmother is calling it The Facebook anymore) but Grace and Frankie‘s age-related gags go beyond that. In one scene Frankie angrily attempts to hang up on Sol on her smart phone not by hitting end but by violently slamming the phone on the table a la an old school land line and cradle. When her friend gently reminds her that’s not going to work, it’s evident she’s not making a techno-blunder but just throwing back to a time when a hang-up could be more dramatic.

The second episode introduces the couple’s children as more well rounded characters, if filling the normal dynamic of sitcom siblings-each set has the settled over achiever and the less mature trouble maker (manifested in Grace’s daughter’s preference for emoticons over an actual conversation and Frankie’s son’s very new sobriety). A romantic past is also introduced between recovering alcoholic Coyote ( played by Ethan Embry and easily the most obnoxious nod to Frankie’s hippie ways) and the obviously over-extended super mom and wife Mallory (Brooklyn Decker).

The series only gets stronger through its first episodes, with the third exploring Grace and Frankie’s feelings of being obsolete that extends beyond their newly single status. When Grace attempts to go back to the beauty company she helped create that she had already handed over to her daughter Brianna (June Diane Raphael) she finds not only is there not a seat for her at the conference table, the hair dye boxes previously graced with her face (a solid throw back to a early-era Jane Fonda) have been replaced with a picture of a plant.

Frankie’s attempts to rejoin the workforce is even more cringe worthy when it becomes painfully obvious to the audience that the man she thinks is interviewing her for a job as an art teacher at a senior living facility thinks she’s a potential resident (though it does lead to a pretty impressive demonstration of Tomlin’s flexibility).

The crux of the episode, though, is a dinner party thrown by Sol and Robert for their four children. At first Robert’s girls seem more freaked out by their father reaching for Sol’s hand over the dinner table, but its Sol’s son Nwabudike (Baron Vaughn) who eventually shatters the quiet dinner party, echoing the question Brianna had asked him moments earlier in the kitchen-if their fathers had had a multi-decade affair with women, would they already be over at their place for dinner? The no hangs heavily in the scene, setting up Sol’s bedtime realization that they had “forgotten it was too soon.” The men have forgotten while they’ve had years to digest what they mean to each other and what they want their future to be, their family has barely had a week.

The episode ends with a slightly manic Grace exploding in the face of a grocery store cashier who ignores them again and again, and after Frankie drags her out she shares the cigarettes she stole for them, calling their sense of invisibility not a source of angst but “a superpower.” And when they peel out of the parking lot the two women seem solidified in their “us against the world” friendship, making way for ten more episodes full of Tomlin and Fonda’s killer chemistry, and hopefully no more attempts at stale, humorless gay jokes. 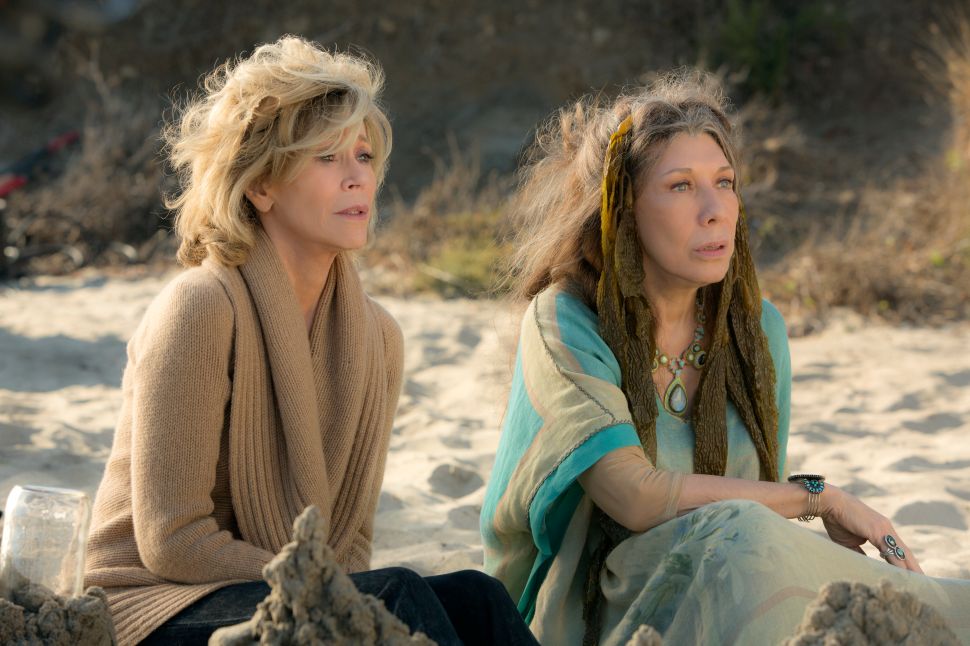