Comptroller Scott Stringer today handed out checks totaling more than $900,000 to 33 mostly Guyanese immigrant workers—the proceeds of a nearly $1 million settlement with a construction firm that worked on 12 city projects and failed to pay prevailing wage.

The money redistribution followed a press conference where Mr. Stringer lambasted the Queens-based North American Iron Works Inc. for failing to pay the $42-an-hour plus benefits to its non-union employees, whom he said it had instead compensated at the rate of roughly $16 per hour. The comptroller, charged with handling the city’s finances and setting prevailing wage and benefit figures, reached a settlement deal with the subcontractor—which worked on 11 schools in Brooklyn, the Bronx and Manhattan as well as the Queens Museum—for it to reimburse to workers some $920,000 in back wages and pay a civil penalty of $46,000.

“These 33 workers were defrauded and exploited. Today, we’re righting a wrong and sending a message to those who work on city construction projects: the comptroller’s office has your back,” he said, adding that the subcontractor is now barred from working for the city or state for five years. “We’re also sending a message to unscrupulous contractors.”

Mr. Stringer brought up a whistleblower from North American Iron Works, who said he realized that he was being underpaid and had the knowledge to contact the comptroller’s office. The subsequent investigation found that the company had left the non-union workers off the books when it submitted requests for funds to the city

The comptroller said he believed North American’s practices could likely be widespread, and that many workers were unaware of their legal rights. Mr. Stringer told the Observer he hoped to work with city agencies to create an information campaign to encourage more underpaid workers to come forward.

“Let’s make this very clear: our office has no tolerance for dishonest vendors who pocket taxpayers’ dollars instead of paying employees the wages and benefits as required by law,” he said.

However, Mr. Stringer admitted to the Observer he had “not specifically” discussed increasing outreach and education with Mayor Bill de Blasio’s office, which controls the School Construction Authority and the Department of Design and Construction. There has reportedly been little cooperation between Mr. Stringer and Mr. de Blasio since the comptroller criticized the handling of contracts for the mayor’s flagship pre-kindergarten program and his executive-ordered living wage hike.

North American did not immediately respond to requests for comment. 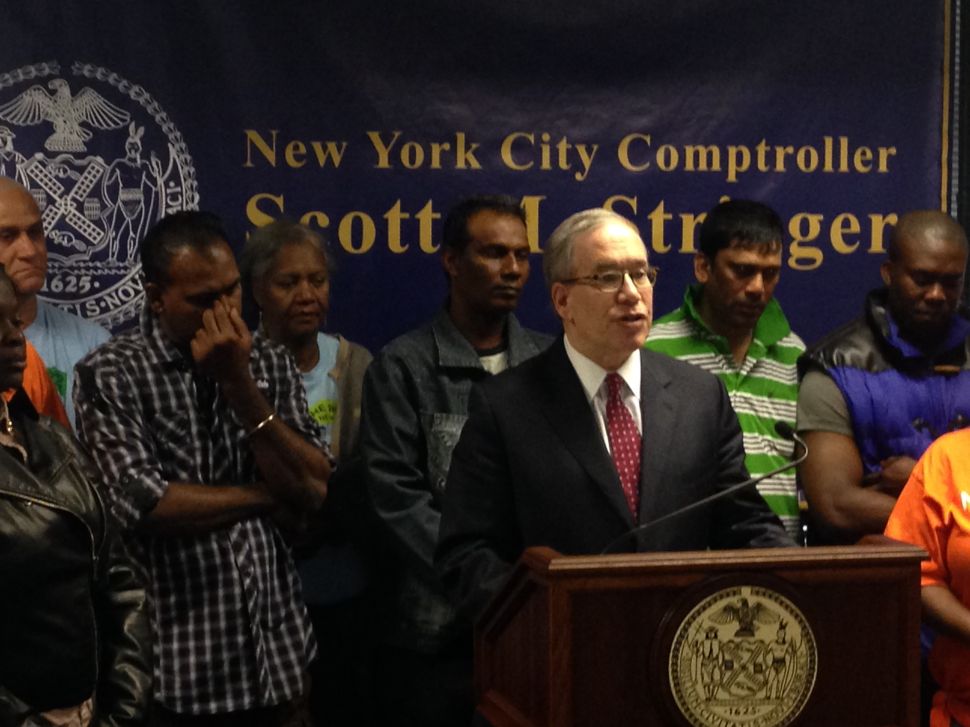